WARIF educates Boys About Gender Based Violence & its Effects 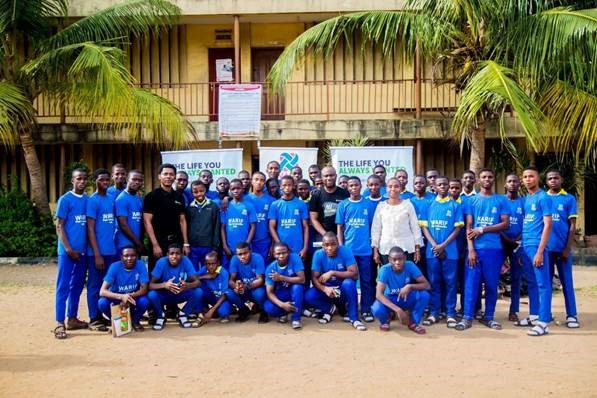 Following the success of the first cycle of its Boys’ Conversation Café (BCC) Initiative, Women at Risk International Foundation (WARIF), has kicked off the second cycle of this project to educate a wider range of boys in Nigeria about gender-based violence and its effects. This project aims to instill the role that boys have to play in the reduction and prevention of rape and sexual violence.

Recording the success of the BCC which launched in April in 2018, 40 boys between the ages of 13 – 17 years in Surulere Secondary School were trained on the identification of the signs and prevention of Gender-Based Violence in their communities. The 4-week intervention program impacted a significant success rate in terms of immediate behavioral change. Some of the notable changes in the boys were: Pornography addiction dropped by 41%, about 85% of the beneficiaries strongly agree that consent of a girl to have sex is important and should be respected, and 98% of the beneficiaries strongly agreed to take a stand in any case of sexual abuse rather than be bystanders.

As an extension of this success, the second cycle of this project, sponsored by SAP Nigeria will train 160 boys across selected secondary schools in Lagos in 2019. The WARIF Boys Conversation Café takes the form of informal dialogue sessions with groups of secondary school boys, where well-trained male volunteers serve as facilitators and mentors at these sessions.

Dr. Kemi DaSilva- Ibru, Founder of WARIF, speaking about the project said “We believe that educating boys with a view to changing their existing mindset and perspective about the notion of rape and sexual violence will be transformational in the lives these young men will ultimately lead to a reduction in   the cases of Sexual and Gender-based violence recorded.

This is why the WARIF Boys’ Conversation Café project was launched in 2018 – to change the existing attitudes held by boys and young men on the topic of rape and sexual violence. Through the training held by BCC, we were able to see a positive change and improvement in the narrative of the young boys and we hope that with the expansion of this project, we will achieve a greater impact and a reduction in the high incidence of rape and sexual violence in our communities. Together, we can build a society where boys and men, growing up with positive masculinity becoming protectors of women and not perpetrators of these awful acts” She added.

WARIF is reinforcing its call for everyone to raise their voices against rape and sexual violence of young girls and women in Nigeria and beyond. Parents and teachers need to play an active role in the education of their sons about appropriate sexual behavior and conduct. Male role models and father figures should also maintain positive influences on the lives of young boys.

WARIF also continues to address its war against sexual and gender-based violence with the free services offered at the  WARIF Centre,  and other educational and community-based initiatives such as WARIF Educational School program, WARIF through the Arts initiative, WARIF Know your community and WARIF Gatekeepers initiative.

Women at Risk International Foundation, (WARIF) is a non-profit organization, established to raise awareness and address the prevalence of rape, sexual violence and trafficking of young girls and women in communities across Nigeria. This the foundation achieves through the development and implementation of a series of initiatives which are impactful, measurable and sustainable, targeting both the intervention/treatment of these affected women, as well as providing preventive measures to reduce the high incidence.

The foundation seeks to redress the adverse effects seen as a result of Gender-Based Violence both immediate with health and psychosocial risks to survivors such as new cases of HIV/AIDS and unwanted pregnancies, as well as in the long-term societal problems that subsequently occur such as higher incidence of illiteracy and the adverse impact on girl learning and the social development of a nation.

Related Topics:Women at Risk International Foundation (WARIF)
Up Next

A Johnny Drille, Kizz Daniel Collaboration May be on Its Way