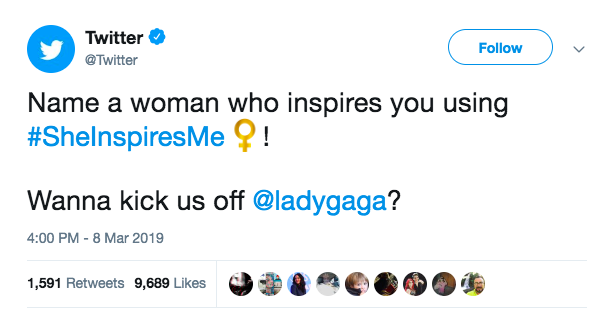 Twitter is marking International Women’s day with the #SheInspiresMe hashtag, which is being used to celebrate women all over the world.

#SheInspiresMe is Twitter’s campaign to shine a light on inspiring women. For this year’s International Women’s Day, twitter celebrating women who are not only on top of their game, but who are also increasing visibility of women across sports, entertainment, politics and more, and inspiring young women and girls across the world.

Women and allies around the world join together on Twitter to share their experiences, challenges and successes. They share the changes they want to see, foster dialogue and debate, and celebrate their accomplishments, whilst also acknowledging progress that remains ahead.

Throughout the past few years powerful voices and movements have come together to speak up for women’s rights.

Twitter also shared some of the most mentioned women on its platform. See below:

Most mentioned women on IWD 2018

Sports fans around the world proclaim that these sportswomen are the Greatest Of All Time—the ‘GOAT’ – by tweeting an emoji of the farm animal alongside their sporting faves.

To join the conversation, share who inspires you using the hashtag #SheInspiresMe to unlock the special emoji.