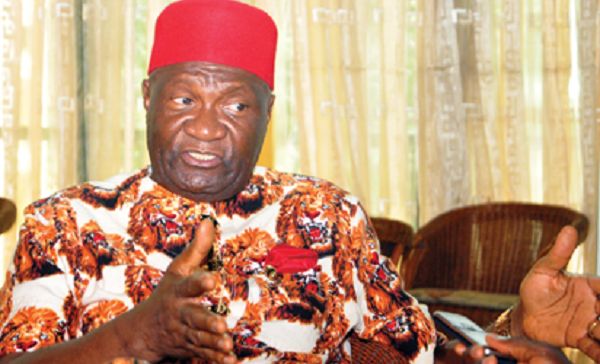 John Nnia Nwodo, President-General of Ohanaeze Ndigbo, has distanced the apex Igbo socio-cultural organization from statements credited to the group’s President in Lagos, Solomon Ogbonna, that Ndigbo should vote for APC’s Babajide Sanwo-Olu in Lagos governorship election on Saturday.

According to Vanguard, Nwodo washed the hands of Ohanaeze from Ogbonna’s statement and described it as a personal opinion which no Igbo in Lagos should take seriously.

On the coming governorship and state assembly elections, Ohanaeze never met to tell Ndigbo where to vote but what Imeobi Ohanaeze said was that one thing you need to have at the back of your mind is that whoever you want to vote for should be one who agrees on restructuring so that whenever your representative is asked to vote, he will say that he agrees on restructuring of the country; so that if a governor is called upon to call a meeting for restructuring, he would agree to summon such meeting. It is such people you should vote for.

In Igboland, it’s not difficult to find such people. One who has done well, let him so for second term. For the Igbo leaving outside our land, nobody should scare you people.

We all have equal rights whether you reside in Igboland or in diaspora. I have been most disturbed by news from Lagos and I want to tell our people residing in Lagos that what Solomon Ogbonna, the Ohanaeze President in Lagos, said was his personal opinion and was never approved by Ohanaeze Ndigbo.