We've got the Scoop on Who was Behind the #SeeFinish Campaign!

Ideh Chukwuma Innocent a.k.a OneSoul to commence Production on his New Project tagged 'Igbinogun' in 2020

If you live in Lagos or have an active social media account, you would have noticed the half-naked men sightings around Lagos a few weeks ago last week and the buzz it created on social media around the same time. 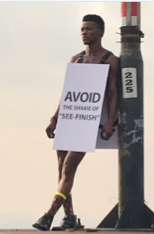 Well, Leadway Assurance was behind it all. The Insurance company has launched a campaign titled ‘See Finish’ to introduce people to insurance in a new way that is engaging, relatable, attractive and fun. The #SeeFinish Campaign immediately sparked curiosity and got people talking when commuters sighted half-naked men standing along the 3rd Mainland Bridge and other parts of Lagos with placards that read “Avoid the Shame of See Finish” and it was only a matter of time before Social media went abuzz. But that was not all to the See Finish Campaign.

Launching the campaign, Leadway put up a parodical social media account @johnweylead on Instagram and Twitter to beg for funds in peoples comment sections. Celebrities such as Linda Ikeji, Don Jazzy, and Tonto Dikeh were not spared from his pleas. 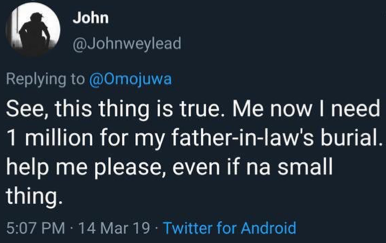 It was around this time that the half-naked men carrying placards were spotted around Lagos but things got clearer and more interesting with Leadway’s release of a funny television commercial, ‘The Travails of John”, where a character named ‘John’ was begging relatives for money to bury his Mother-in-law and he was greeted with shameful responses which he termed “see finish”.

To wrap up the campaign, the same men who had previously been sighted half-naked were sighted around Lagos again, this time clothed in nice-looking Agbadas with placards that had a different message saying, “No More See Finish, I’m covered by Leadway Family Benefit Plan Plus.” 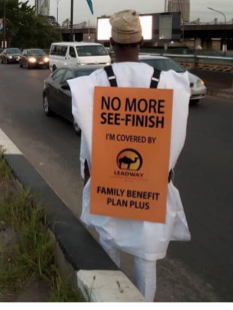 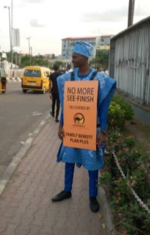 This totally explained the message that the insurance product covers your shame.

The See Finish Campaign was launched to introduce the Leadway Family Benefit Plan Plus, an insurance product designed to provide funeral expenses in the event of loss of an insured life or death of the policy holder. The policyholder is the individual who signs up for the plan to insure his/her life, the spouse, parents, and parents-in-law as the insured lives. When any of the insured lives is lost, the policy holder receives an agreed sum of money that will help cover funeral expenses. The plan also comes with an additional one-month grocery allowance of ₦25,000 if any of the insured life passes away and six months allowance of ₦20,000 if the policyholder passes away.

Blogger Jijiglam is Serving Major Fashion Goals in these Photos!