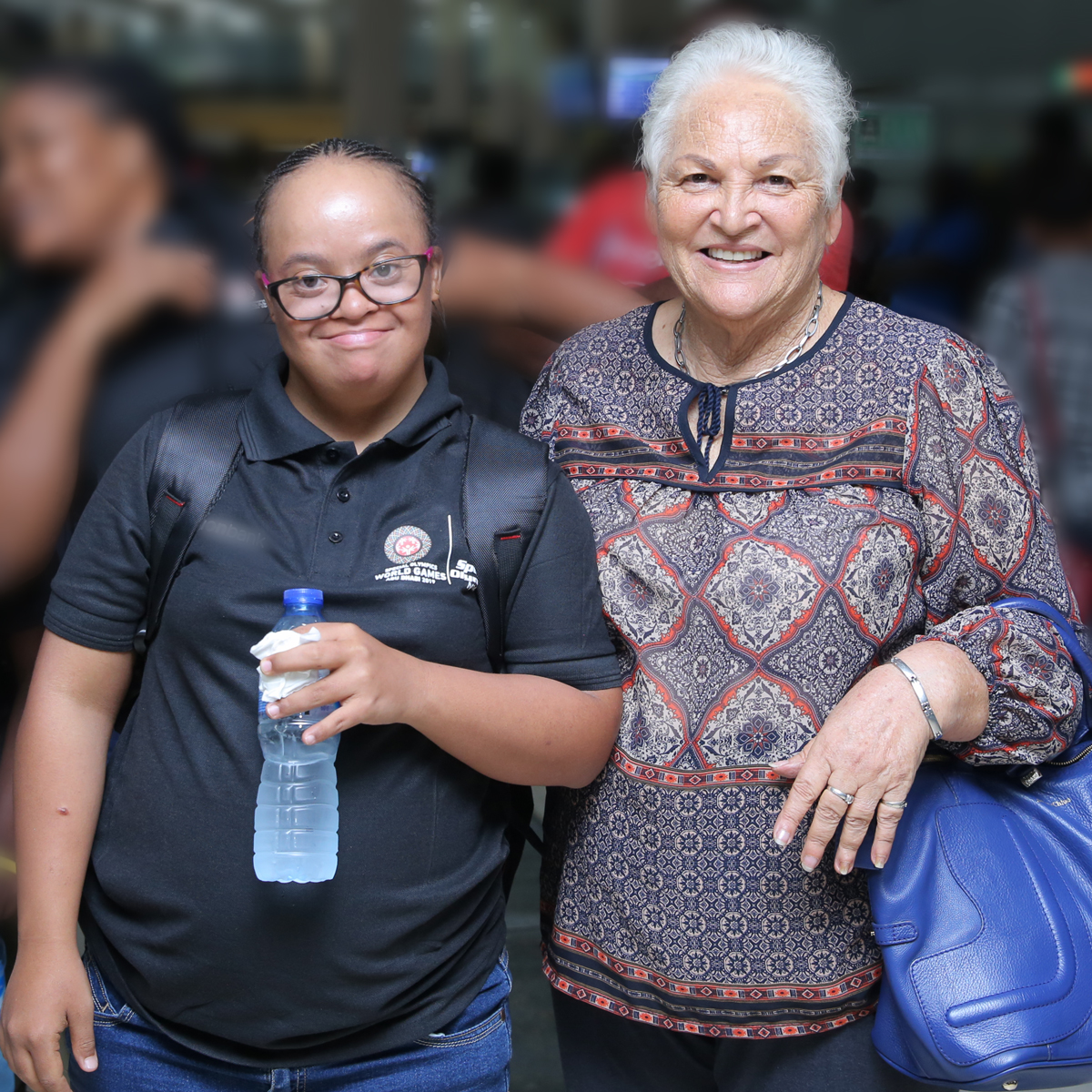 In this interview, Reva Passman, mother of Treasure Chidi-Ofong, a celebrated Special Olympian who represented Nigeria at the Special Olympics World Games in Abu Dhabi with support from Sterling Bank Plc, speaks about the challenges of raising an intellectually challenged child and the need for the state and members of the public to recognize them.

Can you tell us how you discovered that Treasure had special talents for swimming? How were you able to train and support her up to this point?

When I had her, I was told that she would never walk. They also told me that she would never talk, never do this or that and I just hugged myself and thought it is up to God to either take or save her life. But she walked at 18 months and I enrolled her in a regular nursery school. When she could no longer cope with the academics, I brought her home and arranged a home tutorial for her.

I had known Folashade Bolumole in church since the late 1980s but she was not in Special Olympics at that time. One day, she saw me at the South African High Commission and greeted me. Then, she asked for my number and I gave her. She also asked after Treasure and as the chat progressed, she told me about Special Olympics.

It was my first time hearing about the Special Olympics. She urged me to bring Treasure for swimming practice and I was like, why don’t these people just let me be in my own little world. But she was relentless, always calling and calling. Later she detailed one of the guys in her office, Adeola, to start calling me and I wondered if they will ever get tired and give up.

I have a phobia for water. When I travel outside the country, I never go near swimming pools or large bodies of water. So, when the pressure became too much for me, I agreed to her request to take my girl for swimming lessons and proceeded to the Airport Hotel in Ikeja. When I got to Allen roundabout, I called Adeola who then informed me that he was in Kano and I felt relieved.

So, I made a U-turn and went back home but Adeola resumed calling me for like two months after that failed expedition. Eventually, I succumbed and we went to the swimming pool. Of course, Treasure didn’t want to enter the water which made my older daughter joke that I had transferred the phobia.

The Olympic sized pool at the Airport Hotel was above the requirement of a beginner like Treasure. So, we transferred to the Country Club and we had some very good coaches. Treasure and two others were taught how to swim and once they could glide up the wall and swim like five to 10 minutes, we came back to the Airport Hotel and we had been there since.

I can’t swim and I’m frightened about anybody drowning. I thank Special Olympics that they have made it worth the while. They have put a new meaning to living. She has always been very social. She likes music. She has her own musical sets and things like that. Beyoncé is her favorite artist and, right now, she is seriously into Beyoncé music. We play Beyoncé all day in the car and all night.

Sometimes she wants to know why people are staring at her and I say to her that it is because she is very pretty. The people at Trinity House are used to her and she is not bothered about people staring at her anymore. I am sure when we walked through here the first time, people looked at us. Now, some of them would be wondering if there is something wrong because anyone who takes a deeper look will detect a bit of her condition. Sometimes, it is not obvious but sometimes it is possible to notice that there is something different about her.

When did she attend her first competition ever and at what age?

She had her first competition in 2011 when she was in her late 20s. One thing I discovered is that, if you have an intellectually challenged child – which is what she is, she is not disabled, you have to be prepared to do the work as a parent. Some mothers and fathers cannot do the work. You have to be prepared to dedicate time to the child. Such a child needs dedication and that becomes your way of life.

I like to tell people that this is my project and I will do everything within my powers to make her achieve as much as she can while she is able to because it will get to a stage where she can no longer swim due to age or other things. Fortunately, there is no age limit in Special Olympics swimming. She can swim at any age as long as she is still interested in it, I’ll do everything in my power to make it work.

So how has swimming helped Treasure?

Well, it is only people that know her, like when she goes to her brother’s office in South Africa, his colleagues usually say, “Here comes the Olympian” because the brother had publicized it there in ABSA Bank. People recognize her and they say here comes the Olympic champion.

What has the experience been like, representing Nigeria, for her and for you as well?

How competitive is she when it comes to swimming?

Oh yes, when they get into the pool, they become quite competitive. She is the fastest female on the team.

I will like Special Olympians to be better recognized like other athletes because right now they come in quietly. There is no coverage by newspapers and nobody knows when they are going or coming. Channels TV sometimes gives us some kind of coverage but how many people are able to see it because the whole nation does not see it. We need more of the newspapers and other publications to give them coverage.

When they win medals, nobody hears about it. They are not even asking for money because they have won medals, but it would be nice for them to be recognized and celebrated. Special Olympics has a lot of work to do in that regard.

What are the challenges you have faced on this special journey?

The average Nigerian is ashamed of an intellectually challenged child. They are being hidden which is why you cannot easily find them. Special Olympics has the challenge of getting the athletes to come in. For instance, I’m constantly looking for more swimmers because we have an allocation of nine swimmers.

We have had the same four swimmers from 2010. They will come, swim for one month, then they disappeared and I don’t see them again. They call the present team the elite’s team because they feel that it is only people that can afford it that can do it but it is not so. I am sure that in America, they compete in all the states of that country to come to the World games. They always have more than 300 in their contingent.

This is a volunteer organization nobody gets paid; our coaches are not paid but I pay for Treasure’s coach because she works in my house.

Beyond fame and recognition, do you also see the possibility of society rewarding this talent, so that they can also be secured and have their own income?

I would like that. I do not think we have reached that stage yet in Nigeria. Even the Para-Olympians, how many do they support? We see them on the streets in Maryland in their wheelchairs begging. But maybe with time and exposure, we will. What is wrong if one or two organizations take up the sponsorship like payment of ten thousand Naira every month? It is not enough but it is still something. It can give them a sense of belonging. Thankfully, companies like Sterling Bank have realized that the return on investing in special athletes such as Treasure is beyond financial and has a ripple effect on society. It creates a whole new value chain for their coaches, caregivers, and teachers. We have come a long way and I believe we will get there soon.

What is the difference between the Paralympians and the Special Olympians?

The word Olympics is only used by two organizations in the world, IOC which is the International Olympics Committee and Special Olympics.