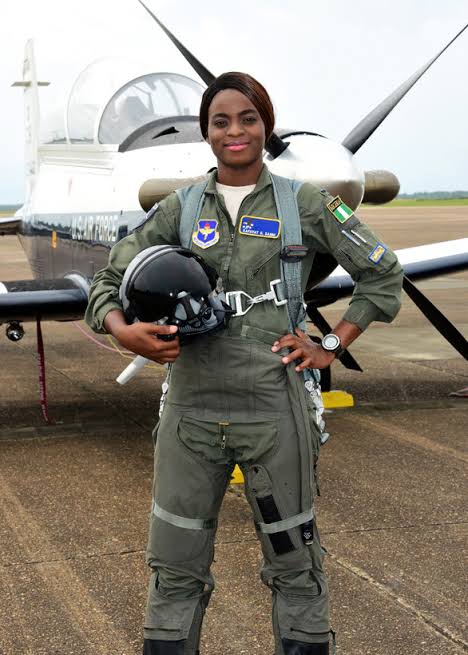 On Tuesday October 15, 2019, Kafayat Sanni made history when she became the first female fighter pilot in the 55-year-old history of the Nigerian Air Force.

She was decorated alongside 12 new fighter pilots at the NAF Headquarters, Abuja.

Kayafat Sanni emerged the overall best pilot at the NAF 401 Flying Training School, Kaduna State, in 2017, and thereafter, she was sent to the United States of America to train at the US Aviation Leadership Programme.

In an interview with Punch, she speaks on her achievements, playing a big role as a female officer and her contribution to counter-insurgency.

On being the first female fighter jet pilot

It was what I wanted to do. And I felt that everyone is not supposed to fold their arms and watch what is happening in our country. Everyone could always play their part. So I did not think there was any reason for me to think that it is not possible for me to actually fly the jet because there was no female that ever flew the jet. I believed I could achieve it and I did.

On contribution to counter-insurgency operations

It will motivate me of course. There are other pilots there in the fronts and they are playing their part. They have been doing their best. So I am also just going to join my male counterparts in the insurgency fight and every other thing that have been going on in our country. So I am just going to get there and play my part.

The advice I want to emphasise to them is that they should never say no to opportunities. They should always strive to be the best and put in their efforts. They should never look at anything that seems to want to overpower or overshadow them. For me, you can always attempt things and if they do not work out well; fine. But at every point in time, you just need to put in your best.

Sisi Yemmie is full of Gratitude as she Celebrates her Birthday