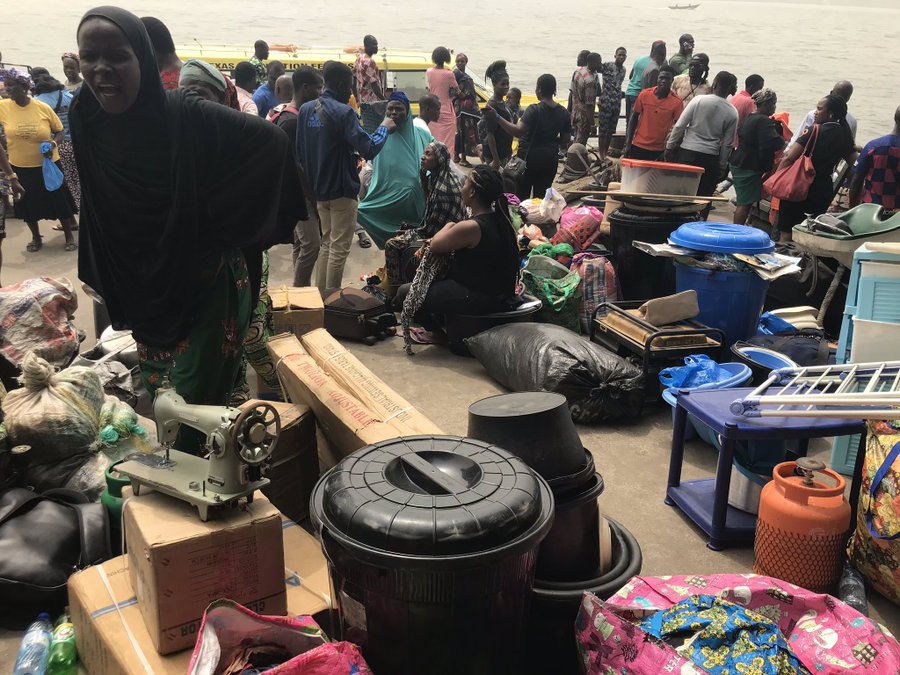 On Tuesday afternoon news began to filter through that gunshots had been heard on Tarkwa Bay, the popular island that’s home to beaches along the Atlantic coast.

It was unclear what was happening. Journalist Kiki Mordi said she’d spoken to the Baale of the island, who confirmed the gunshots but said they were to “lure out oil bunkerers.” Others, however, said the island was being cleared off, its people evacuated.

Photos began to arrive as evening neared, showing people with their belongings in Ghana-must-go bags, their mattresses on the waterfront. It looked like, really, people who had spent their entire lives on Tarkwa Bay were being evacuated, with no alternative accommodation provided. Basically, they were being rendered homeless.

The Nigerian navy said the operation was aimed at protecting equipment belonging to the country’s national oil company from “vandals,” but even more pictures showed the people of Tarkwa Bay logging their properties out of the island.

According to Punch, an eyewitness said a naval personnel, who had been on surveillance of petroleum product pipeline in the area, accused members of the community of vandalising the pipeline in a bid to steal fuel.

Tarkwa Bay is the 24th community in the area that has received eviction orders, Punch reports, as part of the broader operation by the navy. Thousands of people have left their homes in surrounding areas since December 21 and their residences have reportedly been demolished.

This calls to mind the evacuation of other waterfront communities like Otodo Gbame, whose residents are still yet to be resettled.

See photos and videos from the forced evictions:

Please there a secret mission ongoing in tarkwabay island by the federal government and Nigerian Army displacing dwellers from their home and shooting sporadically to threaten whoever refuses to leave. #savetarwabay #NigerianArmyDictatorship pic.twitter.com/OOCP96VK4i

Lives scattered as #TarkwaBay community in #Lagos as @NigerianNavy chases thousands out with less than 1 hours’ notice, boatloads arriving at CMS jetty with all belongings and nowhere to go. #EndForcedEvictions #LagosOnFire pic.twitter.com/bUfkOF1c4A

The residents of Tarkwa Bay Island are being forced by the men of the Nigerian Army to evacuate the island as we speak.

No prior notice, nothing!!!

Where do they want them to go to? This is so sad ?? pic.twitter.com/mUPM1uS1zE

a cropped photo to establish the story yesterday. look carefully and you will see two military men, and civilians hastily moving their things..#enforcedeviction#tarkwabay

It was reported that members of the Nigerian Army forcefully ejected residents of Tarkwa Bay. These reports also hold that there was no prior notice given to its residents.#TarkwaBay pic.twitter.com/ZyH87R56E9

a fellow artist trying to water his plants for the last time before leaving them.
he had evacuated his works, books and few belongings after the #enforcedeviction. he couldn't carry other things like his tools, plants & etcetera cause of the suddenness of the eviction#tarkwabay pic.twitter.com/4YYvwS2hct

The government evacuated everyone living in tarkwa bay island, where will all these people relocate to? pic.twitter.com/2nHbp01Koc

at tarkwa bay jetty.. hundreds of family trying to evacuate their belongings after the sudden informal announcement of evacuation..#enforcedevacuation #tarkwabay #savetarkwabay pic.twitter.com/jRqWKQmBD2