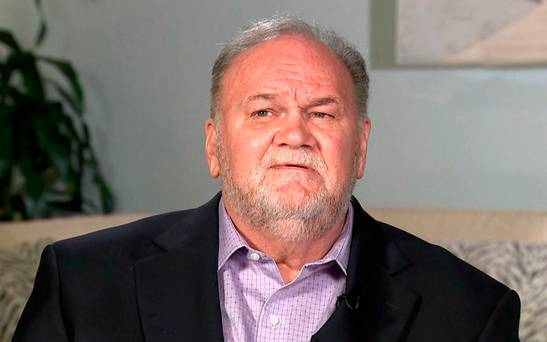 Thomas Markle is at it again, and this time the estranged dad of Meghan Markle gave yet another interview admitting he staged photos ahead of his daughter’s marriage to Prince Harry, and reportedly still takes a cut from profits of their sale over two years on.

According to the Mirror, Thomas shared his side of what happened between him and his daughter in a Channel 5 documentary titled: “Thomas Markle: My Story” that aired on Wednesday.

I want everyone to know that I am not all the trashy things that are being said about me,” Thomas begins, as he explains why he agreed to give the exclusive interview. “I want Harry and Meghan to see that this is not fair. To them, I don’t exist. Harry said to me, ‘If you had listened to me, this would not have happened to you, if I stayed in the house, and never spoken to anyone this wouldn’t have happened. To me, that was a very rude thing to say, especially when he knew I was lying in a hospital bed. At that point I said to him, ‘It’s too bad I didn’t die because you guys could pretend that you’re sad,’ and then I hung up on them. I was done. That may have caused everything, I don’t know. But I’ve not heard from them or spoken to them since.

While he admits that he knows that Meghan and Harry, along with the royal family, will be mad at him for doing interviews, he reportedly states in the documentary that he will continue to do them for money. Harry and Meghan owe him, he says.

I’m going to defend myself and I’m going to be paid for it. I’m not going to refuse to get paid for it. I’ll do future things and be paid for it, I think. I don’t care. At this point, they owe me. The royals owe me. Harry owes me. Meghan owes me. What I have been through, I should be rewarded for. My daughter told me that when I reach my senior years she’ll take care of me. I’m in my senior years now, it’s time to look after daddy

Thomas, who now lives in Rosarito, in Mexico, told the TV documentary that a period when Meghan lived with him from 11 to 16 were the “happiest years” of his life. He showed footage of their time together including a clip of Meghan in a school play. Thomas said:

Harry flew back to Canada from London on Monday where he is to start a new life after the Sussexes announced that they will step back from roles as senior royals.