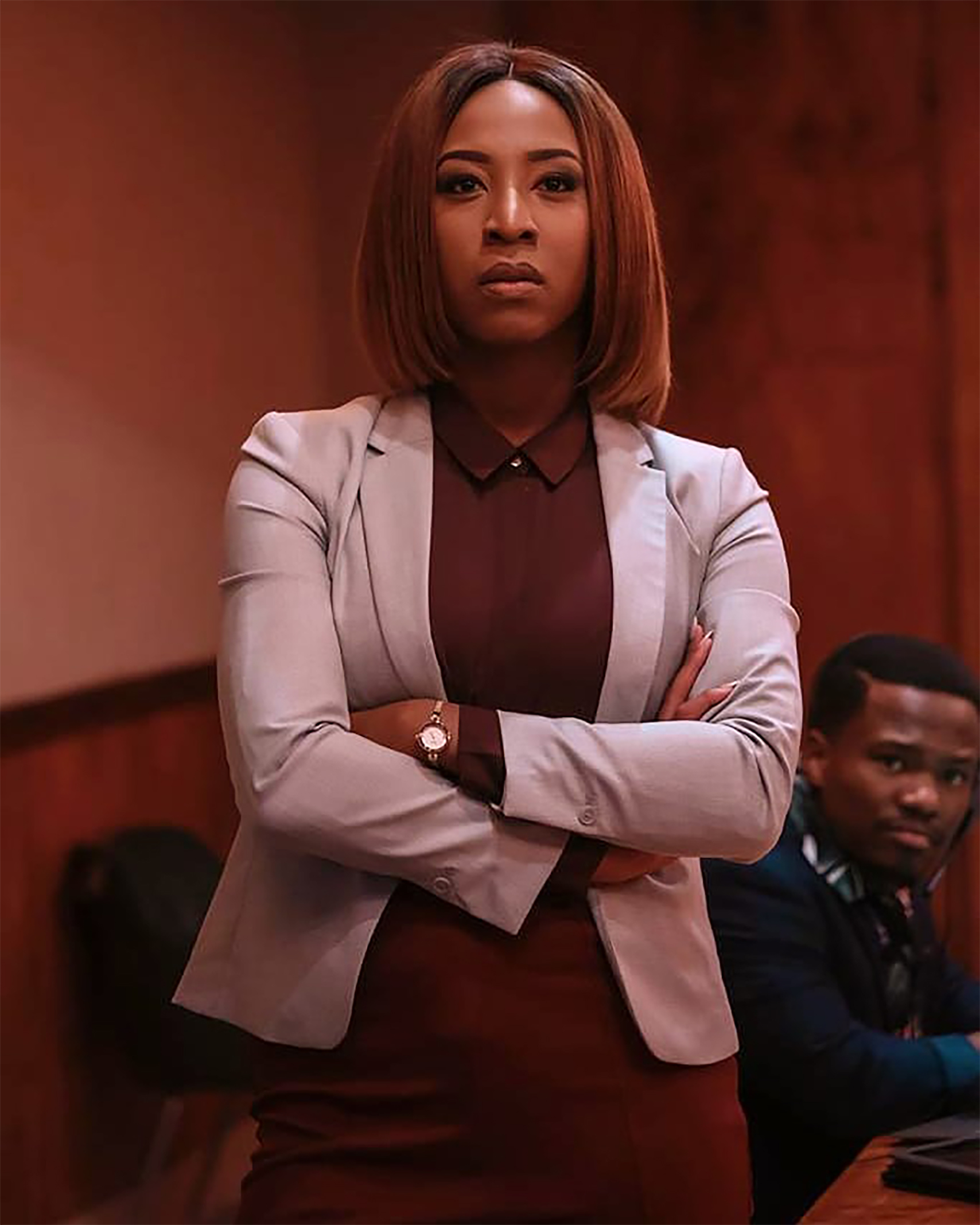 When Chiedza “Chi” Mhende moved to Johannesburg after getting a BA in Live Performance from AFDA, the South African School of Motion Picture Medium and live Performance in Cape Town, she, like most young people, was always questioning her skills and wondering if she was good enough, even though she had been putting in work.

The Zimbabwean born actress and voice artist played Lady Capulet in a 2010 Artscape production of “Romeo and Juliet“, narrated the miniseries “Bridging Waters,” a docudrama that shines the light on those residing along Southern Africa’s rivers; the Al Jazeera health series “Lifelines,” and the children’s wildlife documentary series “Siyaya: Come Wild with Us.” Chi won the Best Actress award at the 2014 Durban Film Festival for her role as Terri in “Love the One You Love,” and in 2015 she made her television debut on the popular SABC1 soapie “Generations: The Legacy” as Wandile Radebe, Zola’s son, who later transitioned into a woman.

Chi can’t believe her luck that she is in Netflix’s first original African series playing Miriro ‘Miri’ Dube, the director general of the Special Operations Group (SOG), a South African intelligence agency whose operations are only privy to a few. She believes this is proof that doing the work and being dedicated will always pay off.

“It is obviously unbelievable, completely surreal but also absolutely humbling. I can’t believe that I am so lucky, but also I sit in total gratitude for sitting, arriving and being at a place that proves that all the work, all the dedication, and all of the persistence has paid off,” she says.

Queen Sono follows the story of a South African female spy who fights crime while navigating crisis in her relationships and personal life. Reading the script was an exciting experience for Chi, as this original African female action hero was something she had never pictured before. She also praises lead actress, Pearl Thusi, for how she carried the role.

“One of the first things I thought of was how exciting it was to have an African story that follows a lead female action hero when for a long time, my go to for an action reference was Lara Croft–Angelina Jolie. I just always pictured Angelina Jolie, I never pictured an action hero with an afro. I actually coined the term, ‘Aflo’ because she walks with it like a halo. It’s so powerful she is our African angel superhero,” she says. 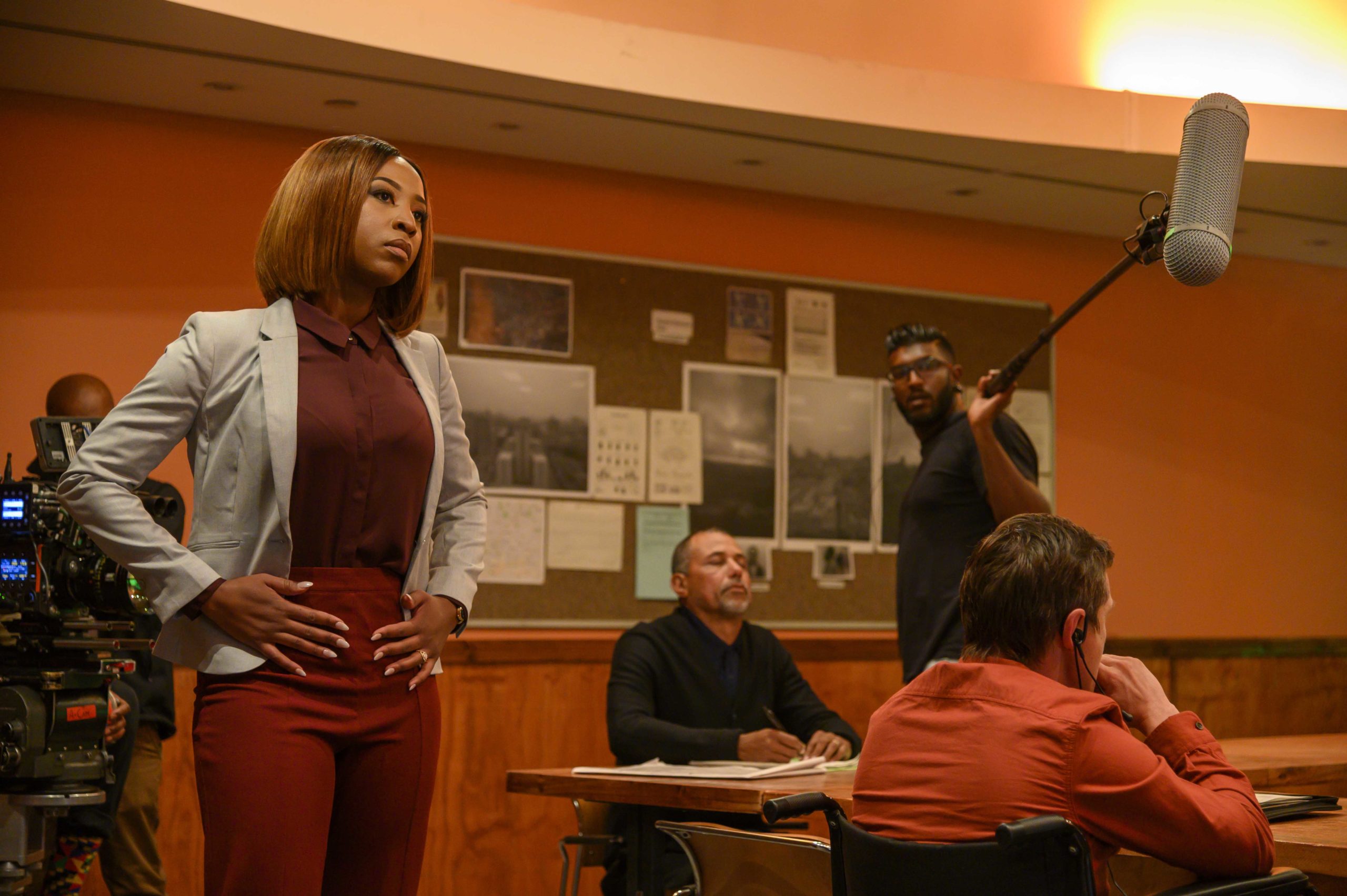 Chi Mhende behind the scenes of Queen Sono

Miri is a boss at work who controls everything but somehow can’t stand up for herself at home. She is a totally different person outside of work, especially for someone with the amount of power she wields. Chi, on the other hand is vocal and can comfortably speak up for herself, but she admits that she sometimes can second guess herself and struggles to speak up, which is where she is similar to her character, Miri.

“The way we are different is I think that she is yet to come into her own voice when it comes to standing up for herself and personal spaces. She is the boss at work, but you see how she is definitely not the boss within her family life; whereas with me I am very comfortable to speak boldly about my choices and my personal life. With friends, family, colleagues, I really would stand up for myself, but with work sometimes I second guess myself which then takes me into my similarities with Miri.

“I think I am as pedantic as she is. I struggle to let go. I always want to make sure that things are perfect. Sometimes I feel like I am young and am I deserving of these things? Then I remember that I am. That I am in the room and the briefing room of SOG where she stands not only as a young woman but also the leader, reminds me, and I want that to be a reminder to everyone, every young woman, every young African that watches this: that the briefing room for me represents having arrived into the room of the success that you have been working towards and deserve,” she says.

For Chi, being in an action/crime series, getting to play the confident and bold Miri was something she had to struggle with and found challenging.

She said of her challenges, “I wasn’t the most athletic of the whole bunch. For an action series, I thought to myself, OMG, if I was the one to be fighting. One of the biggest challenges I would say was to be able to maintain and celebrate the fact that Miri is this bold, beautiful and confident person. Everyday I had to remind myself that ‘you are doing this thing’ and it is something to celebrate. Something I have also been saying throughout this process is that going through that pain, that second guessing and doubting of self has reminded me that I need to say to myself and anyone watching, anyone celebrating this African original, that I finally overcame the challenge by remembering that I am an ‘Afri-can’ and not an ‘Afri-cant’. ”

Describing her most difficult scene, Chi recalls how she was physically struggling on set but it turned out to be a perfect reflection of what Miri was going through at the time.

“There is a scene where they are about to undermine the leaders, that being the government. Of course Miri is a by-the-book kind of character, and she goes with the team. But it’s a difficult moment for her. Should she go with the team or not go with the team? On that day, I was really struggling physically, I wasn’t feeling well, I was feeling very faint, everything was feeling very tight, I was really struggling and I just had such an overwhelming support and love from my co-stars. It comes across when you watch it, you can see that the character was conflicted but I think because of what the actress was going through it actually became such a poetic moment–that my physical discomfort represented her mental discomfort and I really enjoy in art when the two marry like that, when a personal life experience supports and creates something magical for a cinematic, creative/artistic process,” she says.

Chi, who is fascinated by villains and would love to play one, does not hide her admiration for fellow actress, Kate Liquorish, who plays Ekaterina, a fierce, high level military contractor and heiress of a Russian oligarch.

She says, “I love the idea of playing the villain, I love the idea of going into the dark places of humanity and human behaviour. I think the actress, Kate Liquorish, who plays Ekaterina, is an incredible artist. She is a South African girl who speaks fluent Russian–she learned the Russian for the show. So that is someone I would play. I love the color red and that is one of her themes, and to be able to stand in that darkness and that fieriness, to be so bad, I would relish.”

Starring alongside some of South Africa’s biggest stars like Pearl Thusi, who leads the show as Queen Sono, the daughter of a freedom fighter and Vuyo Dabula who plays Shandu, an ex-spy and Ekaterina’s second in command. Chi recalls her early days in Johannesburg and how she handled being in the same space with them.

She said “It was phenomenal. I was in absolute awe of these people. These were people that when I moved to Johannesburg, I thought were coolest. I remember thinking I am not cool enough, I had to keep reminding myself that I am in the room because I am as cool, as valued, as talented and skilful, and I bring something too. It’s something that I think is strongly represented in this cast, by the delicious array of women and men, you get to see a different kind of African child in each character, you get to see Indian and white African children. Which is a concept that people don’t ever think of, people don’t think I am going to see Indian and a white person in an African series and representing Africa.

“You also get to see we are represented in our clothing, our hairstyles, different images, different ideas of what it means to not only be beautiful but what it means to be a star within your own right. ‘Do I wear my weave, am I black enough, do I wear my fro, am I bold enough and do I wear my braids, what does that mean? What do I think of myself’ and so all of those things to be seen and celebrated by this beautiful, talented people was one of the most honourable and glorious things for me to experience and be a part of.”

Coronavirus: President Buhari is Appealing to Nigerians – there is no Need to Panic