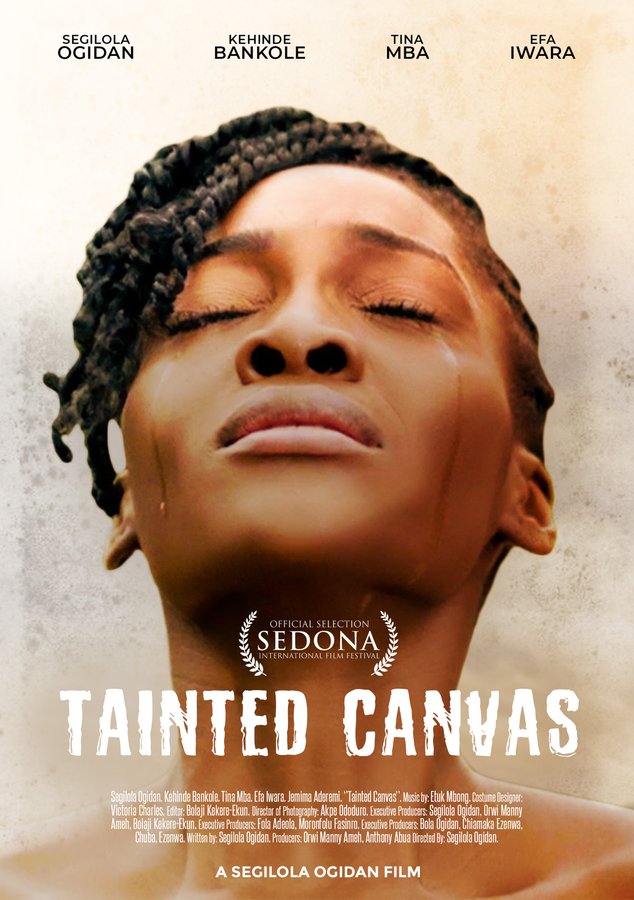 “Tainted Canvas“, a film directed by Segilola Ogidan and produced by Orwi Manny Ameh premiered at the Sedona International Film Festival in Arizona.

Featuring a stellar cast of Segilola herself, Kehinde Bankole, Tina Mba, Efa Iwara, Nonso Bassey, and more, the film explores mental health and motherhood, and the psychological effect of the sexual exploitation of children in adult life.
It follows the life of the unresolved issues Rayo, a first-generation British girl who has to face up to from her childhood in Nigeria. Her quest for healing brings her back to Nigeria and forces her to confront painful family secrets. This is a story of courage, forgiveness, but most importantly love.
Sharing her excitement on the premiere of the film “Tainted Canvas” on Instagram, Segilola wrote:

NB: Epistle loading…Part 1…
I finally did it. My first feature. My Directorial debut. A story close to my heart that has been in development for many years because it kept evolving because I kept evolving. It’s not sensational in any way. But it is a rollercoaster. Of emotions. That range from pain, to anger, to love, to hate, to love again and then to hope. It’s based on my own experiences over the years from when I was 5 of sexual exploitation in different forms by men and women and how those events shaped me as an adult.
For years I saw myself as ugly and unworthy of true love. I’m a painter. And so the best way I knew to rid myself of some of that pain was to paint. But those paintings which I ended up burning were tainted because I felt tainted. I tried to end my life a few times. But God had other plans. However now as a woman with my own beautiful kids, and surrounded by so much love from my friends and my stunning family, I am able to flip the narrative and instead of see myself as ‘ugly’ because of the taint, I am beautiful because the taint makes me a wonderful and unique masterpiece.
This is the reason I made this film, to encourage anyone doubting their unique beauty because of other humans’ limitations. I am grateful to everyone involved in this. It was not easy but I found my tribe in the making of this. And for that I will be forever grateful.
I present to you TAINTED CANVAS which premiered yesterday at The Sedona International Film Festival in Arizona. I hope it will touch people’s lives and encourage forgiveness of self and others. I look forward to the day I can bring it home to share with you all. And maybe you can share your stories too over many bottles of wine at mine perhaps.

It’s Here! WATCH Episode 4 of “Skinny Girl in Transit” – ‘After the Blues’

In Case you were Wondering why Chrissy Teigen wants to Do Away With Her Breast Implants, Here’s Why