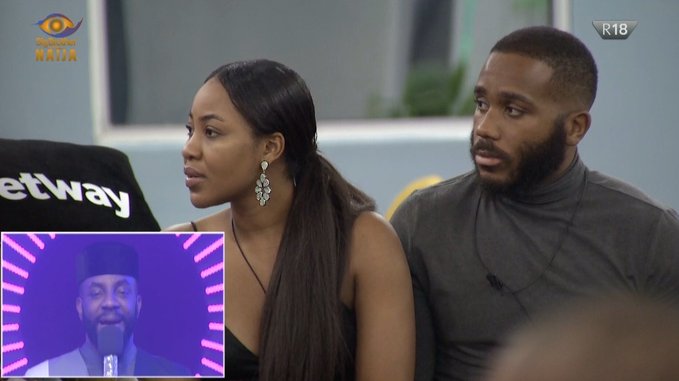 Lockdown Housemates got working on their hairdos all in a bid to claim the N2million in the Darling Nigeria Hair Challenge. It’s been a week since the Lockdown Housemates stepped into the House and it wouldn’t be a stretch to say that some of them need a bit of a touch up in the looks department.

Waking up and looking haggard from last night’s totally lit Saturday Night Party, there would be no better time than Sunday morning to get some grooming going. Thanks to Darling Nigeria, the Housemates can begin the second week looking like a freshly minted kobo.

And money is exactly what’s at stake because the Housemate who spruces their hair up the best and maintains it for the coming week will receive N2million courtesy of Darling Nigeria.

Sunday morning hangovers aside, the Housemates woke up to the news the Salon was open and they would need to come up with the best hairdo as part of the Darling Hair Challenge.

They had five hours to fix their crops and were given full access to the Darling Nigeria booth and haircare kits. Without hesitation, the Housemates went about grooming each other, from loosening hair knots to shaving and general hair treatment. The race for the well-groomed look and gorgeous hairdo was on.

Nengi’s little hair rinse routine got all of you off of your seats.

Wow Nengi has got nice thick long curly hair!!! She will definitely do Justice to the Darling hair challenge🔥🔥🔥🔥#bbnaija pic.twitter.com/oLyEs9KX4L

The Housemates played at being hairdressers with each one announcing that their salon is open to customers. Ka3na was the strictest of the lot. One wrong move as a customer and you risked a tongue-lashing from the feisty entrepreneur from Rivers.

“You can’t even twitch in Ka3na’s salon. She’ll tell you to put your head down,” Dorathy teased.

Prince then got down to braiding Ka3na’s hair like a pro.

Watch how price effortly braids ka3na’s hair. Good with clippers and his fingers. Such a cool chap. #bbnaija #BBNaijia2020 pic.twitter.com/a4IkWxsCYG

Some of the new things Biggie has introduced include putting all the #BBNaija Lockdown Housemates for Eviction except for the Head of House and Deputy Head of House as well as increased Voting power for those who are premium subscribers.

The second Live Show of Big Brother Naija season 5 brought with it twists that will no doubt impact the dynamics of the show.

You can look forward to some #BBNaija table shaking moments when @ebuka says "tonight, we’ll go on a journey of speaking to some Housemates and getting to know all the hot gist in the house." DO NOT MOVE! https://t.co/AxB6HDWrl7 pic.twitter.com/L2Jj9fn9hU

Ebuka announced a new twist in the Monday Head of House games brought about by Biggie in this Lockdown season. All Housemates, except Head of House and Deputy Head of House, will be up for Nomination and therefore possible Eviction each week.

If ever there was a time to get your votes in for your favourite this is it!

Now that her time as the Head of House was drawing to an end, Nengi used the evening to get to know a few of the Housemates she’s been avoiding due to her privilege. First, it was a chat with Prince that revealed she is guarded for good reason. The next person to enjoy the rare treat of her company was Ozo. What started as a casual chat, grew into the pair spending the majority of the rest of the evening together and sharing more than they had with anyone else so far. Some moments raised an eyebrow like when Nengi mentioned her mother passing at 17 after earlier having said she lost her at age 15. Seems keeping her story straight isn’t the pretty ladies strong point. The feeling of ease and relaxation also spilt over into the gentlemen’s conversations as Neo told Eric and Ozo that he had made no moves to pursue Vee, but still ended up in the situation he’s in. Ozo also let them know how he valued Dorathy as a friend but felt more attracted to Nengi.

When the time to go to bed came about the obvious bond that Ozo and Nengi had cemented with their extended conversation made it hard for them to leave each other. If there had been any doubt about the mutual attraction, a moment like this makes it disappear.

A live eviction every Sunday

There will also be a Live Eviction by Housemates every Sunday in the coming weeks of the show. Housemates will each take turns to Nominate one of the bottom four Housemates with the lowest votes in the Diary Room. The Housemate who has the most Nominations will then be the one who gets Evicted. For the very first in the show, Housemates will be the ones that choose who goes home!

Crazy things we do for love

Love is one hell of a drug and at some point, it made the Lockdown Geng do some crazy things.

The face you make when you hear all the nasty things you did at the party.#BBNaija#BBNaijaLiveBloghttps://t.co/2DYpsRHtol pic.twitter.com/nQYlWdO5AJ

Most times we never want to own up to it or the memories are suppressed deep in our subconscious, but at some point, in our lives, quite a lot of us have gone all out for love. Unfortunately, there’s a reason why those memories are suppressed, or why we’d rather plead the fifth when asked. Some of those things we did were borderline crazy and we can’t entirely be blamed cause love is a hell of a drug and it does make people do crazy things.

Except for Lucy who said she was always cautious, the rest #BBNaija Lockdown Housemates had done crazy things for love. Although not as crazy as Jamie Lannister pushing Bran out the window to keep secret his affair with Cersei, but still crazy enough to have you on the edge of your seat. So, why don’t we explore some of the crazy things they did for love.

Going the mile for love

These Housemates literally went the extra mile for love. Neo travelled 16 hours to surprise bae and had to get in by climbing her school’s fence only to get dumped three weeks later. Nengi wasn’t the one to let a missed flight keep her from seeing her boo, nope! She decided to face whatever may lay on her path as she hitched a night bus from Port Harcourt to Lagos.

Eric travelled across state lines with the love of his life and ended up with a faulty car he had to push. Kiddwaya took it a step further and got on a flight to spend a day with someone who he really liked. Vee first time in Lagos in 11 years was because of a boo she travelled all the way from London to see. Praise was this close to relocating just to be with this person.

For some reason, some of our favourite romantic scenes take place while it rains. Let’s just say something about rain makes people suddenly realize how much they love each other. The scene usually starts with them spotting each other after a fight or long time away; then they run towards each other and get locked in a passionate, romantic embrace. This sounds good, right? Yea! Some of our Housemates thought so too but their experiences in the rain with their lovers didn’t exactly pan out the way they thought. Tochi sang under the rain with flowers but it ended in rejection. Good thing it was raining, no one got to see his tears. Trikytee walked in the rain to go see a girl because he didn’t have transport fare.

They say there’s no romance without finance and these ladies put their money where their love was. Tolanibaj used her salary to make sure her man had the finest of drips. Nothing like making your man look good with your money. Ka3na kept her man in school by paying his tuition fees with hers while Erica not only funded her relationship, she funded it with money she got from another guy. Kaisha said she was the man of the relationship and took all the responsibilities. You know what that means, she bankrolled it all.

Dorathy had to secure her boos graduation by getting intimate with his Head of Department. Brighto stayed in a relationship for eight years without any form of intimacy while Prince was beating up people in primary school who tried getting close to his girlfriend. Wathoni switched her phone off for three days and shut herself from the world just to cater to her man. She even went as far as preparing his meals even when she wasn’t a great cook. Lilo had to give up her virginity for love.

Laycon took “always there when you call” seriously judging by how fast he got to his partner’s office the moment he heard her crying on the phone. Ozo made a voice note recording from one of his evening walk with bae, added her favourite song in the background and played it through all the speakers in a restaurant they visited.

There you have it; your favourite Housemates did go out of their way for love and some already seem set on going that route again in the House.

What would they do this time for love? Would it be a romantic gesture or just another strategy for them? Either way, love builds character. If they don’t win the prize at the end of the day, they would eventually learn how costly some crazy things we do for love can be.

Biggie’s introduction to the Diary Room

Our Housemates got a chance to share all the things that they have been sacred to hide during their first week in the House. there were secret loves, strange requests and even the odd tear. Private time became a joy for us all to publicly enjoy.

Did I do that?

It’s the day after the Saturday Night Party and the #BBNaija Housemates are reminiscing over who had a little toom much to drink, who did what and to whom.