Here Are All the Highlights from #BBNaija Day 9

Another day which means another opportunity for the Big Brother Housemates to work towards their dream bodies. The Housemates were in the mood to get themselves sweating today, but some of the methods they chose to do it were rather unusual.

Cartwheels and somersaults are very interesting forms of exercises as some might see them as gymnastics, while others might consider them as a celebration. During Housemates attempts to perfect them, there were fantastic efforts and incredible failures in quick succession. Of all the people who can consider themselves bad at cartwheels, Dorathy has to be the leader. 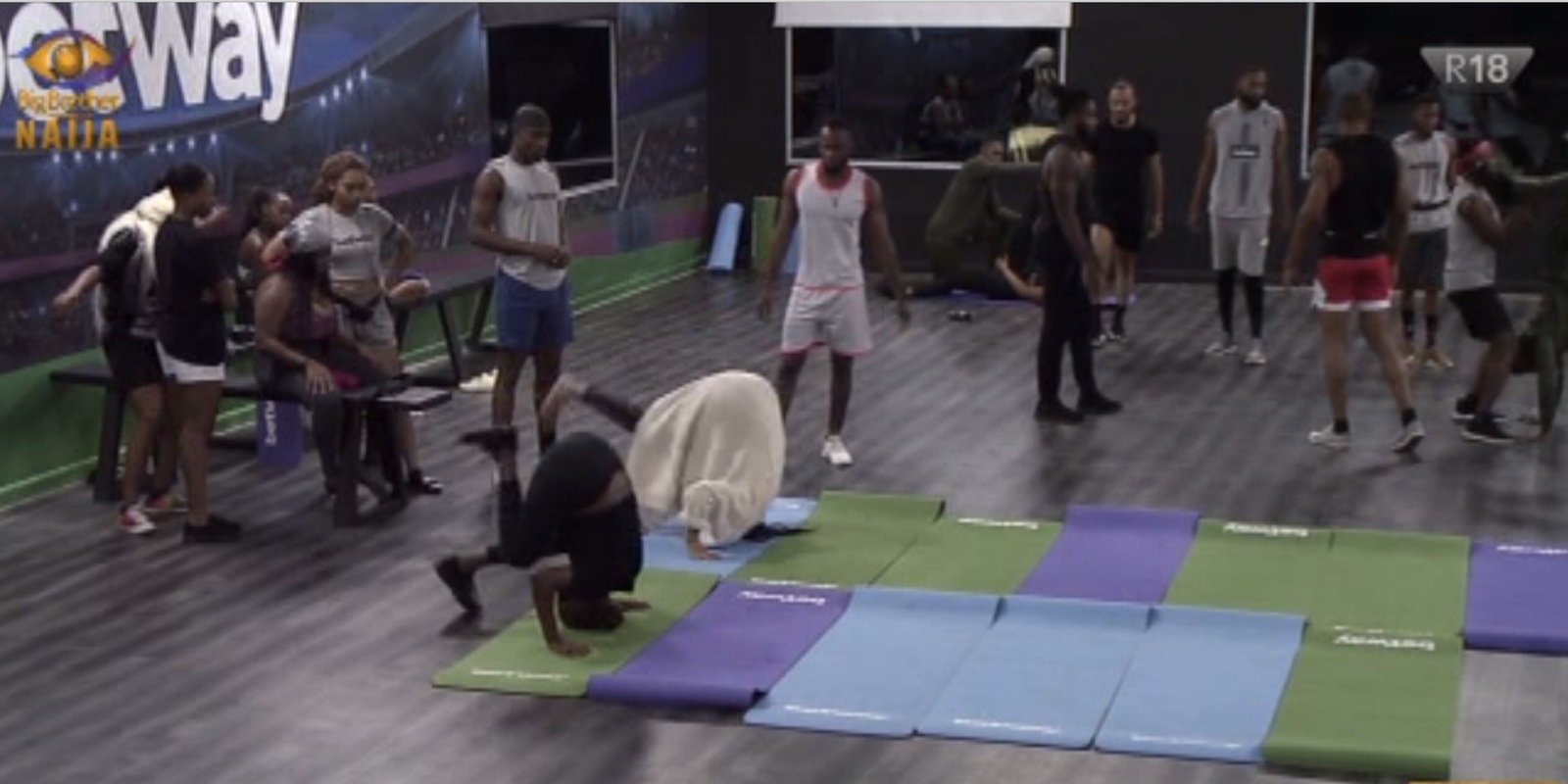 The horsing around didn’t stop at cartwheels and a few of the Housemates attempted to turn their fellow Housemates into wheelbarrows. This also turned into a disastrous venture and Trickytee nearly injured Laycon. The worst injury of the session had to be newly crowned Head of House Lucy, who nearly seriously injured herself while leapfrogging. The way she held her leg after landing awkwardly made us wonder if Lucy’s stay would be coming to a premature end. Thankfully she was okay shortly afterwards, and her reign can continue.

Last week during the Diary Room Session a few of the Housemates asked Biggie to provide them with free weights to aid them in their training. Their lack of weights led them to start treating fellow Housemates as weights and because of his tiny size, Laycon got chosen. He regretted every moment of it. If anyone ever asks you to be a weight for their exercise, learn from Laycon and avoid it!

In the battle to stay on top of their fitness, Eric and Neo decided to do sets of synchronised squats. Once again Eric proved that when physical endurance is the question, he is always the answer. If fitness won Big Brother, then this whole season would be Eric’s.

The Housemates got into a heated argument, and resolved it like bosses! 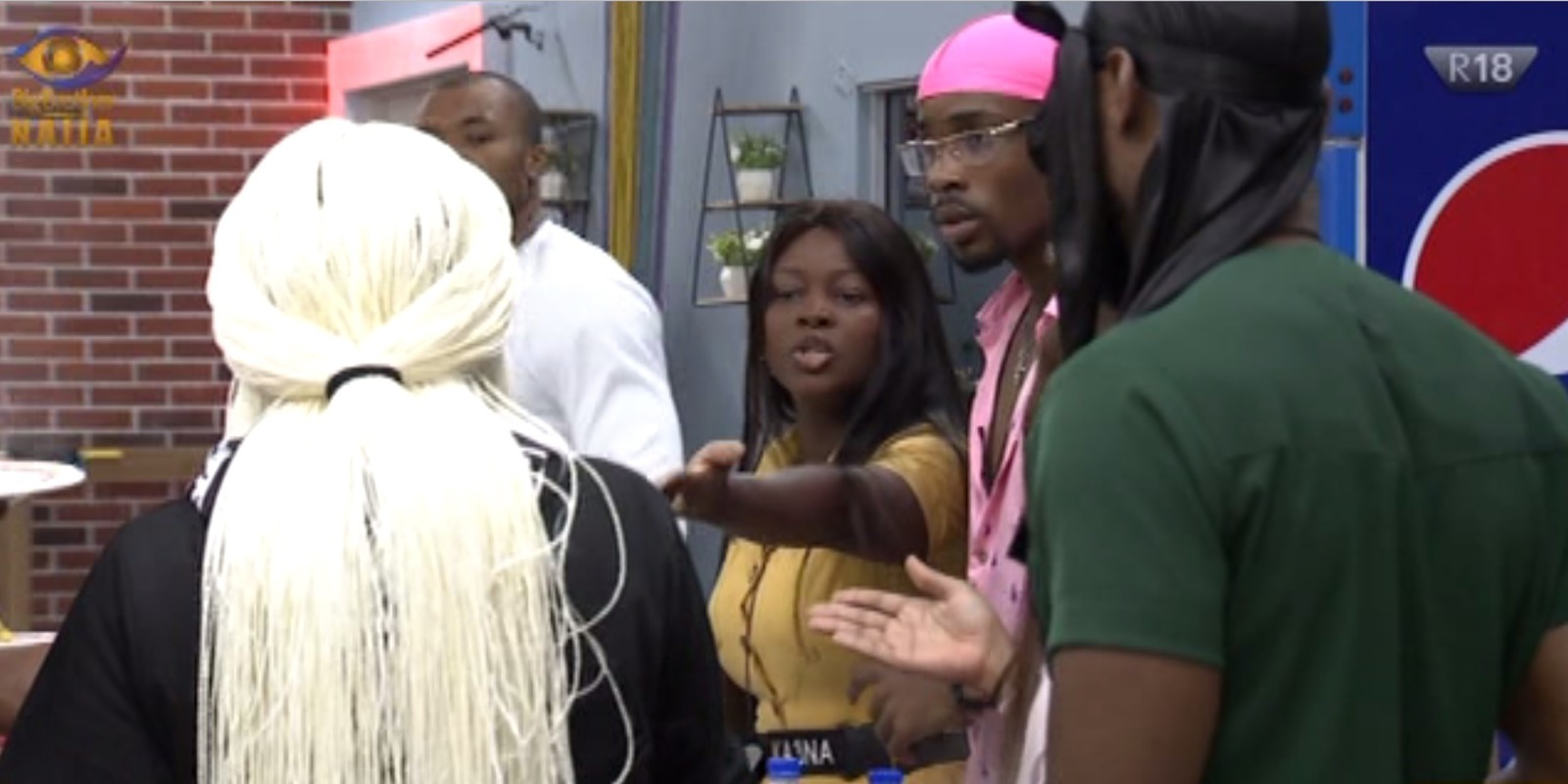 There are many moments in life when fighting is necessary and valid, but today in Biggie’s house the food issue caused so much drama that it nearly burst our brains!

The whole situation kicked off in the kitchen when our regular cook, Ka3na went off on Tolanibaj for dishing out after having eaten earlier in the morning.

Tolanibaj then rudely reiterated that Ka3na’s policies around food are not practical. This elicited many different responses and started the biggest fight we have seen in the household so far. There were screams, swear words, and threats so strong that even Biggie would have shuddered when hearing them.

Of the people most offended by her stance, Tolanibaj and Praise were the most vocal. If you repeated any of the words they said at work, you would find yourself unemployed and recovering from a slap. Luckily cooler heads prevailed and the housemates sat down at the table to discuss the issue and come to a common understanding.

Prince was the most level headed and set the tone for the reconciliation discussion when he stood up to talk. He made sure that the housemates knew that this discussion is all about getting to the bottom of the divisive issue around cooking and who should be allowed to eat. Then Ozo followed him with the defining thought for Housemates reconciliation meeting, stating “If you don’t want to be loving, at least be respectful.” Neo added to that sentiment of understanding, reminding the housemates that tolerance and respect are owed to everyone, regardless of how angry you may feel at that particular moment.

Then it came for Praise to speak his mind and even though he was on the edge of tears for the entire time, he still managed to get his point across. The majority of his extended tirade focused on the idea that respect is reciprocal and this was lacking in his interactions with Lucy. Praise mentioned how he would love to stay friends with everyone in the house even after Big Brother is done, and moments of disrespect make it difficult.

Dorathy also said that if food is causing the issue then maybe the thinking around it should change. Nengi also had words for Ka3na’s behaviour around food and told her that as the mother of the house, statements like the ones she made earlier have no place in the house. Laycon rounded out the conversation perfectly when he noted that “The comfortability you are used to in your house, you won’t get here.” In that statement, he summed up a reality the housemates all knew to be true, that in Biggie’s house, nobody is boss until we chose a final winner.

There’s something magically healing about a good cry. It releases pent up aggression and helps relieve tension. Today the Housemates needed to weep, and they gave us a whole lot more tears than we expected!

Tears can be healing too! When has a good cry helped heal you??https://t.co/8nB3QqsSi5#BBNaija#BBLiveBlog pic.twitter.com/x4wmiIHHWK

The reason the Housemates needed a good cry was healing. The discussion earlier in the day had brought a lot of the Housemates nearly to the point of sobbing, but there was a general feeling of unfinished business even after the resolution. This is when we learned that when it comes to giving the Housemates exactly what they need, nobody knows better Biggie.

The tears weren’t the goal, but rather the result. The goal was to get the Housemates to reflect on all the issues and stresses that have been affecting them, and the method was a Yoga session.

The beauty of Yoga is that it allows one the time to combine movement and meditation to achieve holistic healing. When the meditation portion of the Yoga came about, the Housemates started to tear up, almost in unison as they reflected on their lives and interactions in the Household.

What do you think will change for the #BBNaija Housemates after this meditation session??https://t.co/zPokpfSEvb#BBLiveBlog pic.twitter.com/QlTG2PrkSk

With each passing tear, it became obvious that this exercise was serving its purpose and doing what the conversation couldn’t provide real healing.

After the Yoga was completed tears could be seen on the faces of Praise, Lucy, Prince, and even stone-faced boss lady Ka3na. The relief was written all over their faces as peace had returned to the Big Brother Household…. but for how long?

Biggie’s second Diary Room session has revealed a few cracks within the house, and Lucy as Head of House might have something to do with it.

Lucy’s first day as Head of House (HoH) has been anything but rosy. Ever since taking the HoH throne, cracks within the House began to surface. The boil reached its peak when Tolanibaj called out Ka3na for cooking for some and not for others. Could it be that Lucy being HoH brought about the tension? Some Housemates seemed to hint at it.

Biggie brought Lucy’s tenure as HoH into question during the Diary Room Session. It’s clear that she is finding it hard to bring the housemates together. And the timing couldn’t be worse as the housemates need to work together for this Thursday’s Wager Task. Judging from her Diary Room Session, she’s calling for Biggie’s help to restore decorum and instil discipline in the House.

According to Vee, Lucy has a mammoth challenge on her hands especially since her “emotional attitude and rudeness” has made her lose favour among some of the Housemates. “She’s struggling to bring people together. This HoH job has become somewhat difficult. I’m eager to see how, by Thursday, she’s going to get things done. I’m willing to help but she’s got a huge challenge on her hands.”

Vee thinks the disconnect could prevent them from success in the Wager Task. “People in here don’t know how to portion or eat so if we lose the Wager [Task], we are doomed.”

Trikytee though chose to focus on Lucy’s style of leadership – calling it militaristic. “I guess it’s just her character. She wants us to clean the house every morning. I’m up for it too. But people are complaining. And I believe this would bring in more conflict. I foresee more issues.”

Kaisha has bigger problems than having to deal with “annoying” Lucy. She believes everyone is ganging up on her.

It was not clear why Kiddwaya thought of the worm as a talent that he’d like to showcase, but if he pulls it off without anyone giggling on the side, he may just win it. “I like to show people a lot of my talents. I’ve got good vibes to give,” he said.

"We all know how serious it is and what's at stake," #BBKiddwaya on preparation for the Wager Task.

He also doesn't think the HoH has done enough to prepare them for the task at hand. No disrespect though.#BBNaija #BBLiveBloghttps://t.co/omseGXTifc pic.twitter.com/l7BFrwApcz

Vee would like to bring hula hooping or double Dutch to the Wager Task. But she asked to keep away from gymnastics. “I want anything but gymnastics because I’m as stiff as a ruler.”

"Most of the fights have become absolutely pointless," #BBVee on the altercations in the House.