With JUST N60million Naira: 3 Fundamental Reasons why you should buy into the LEONARDOBYSUJIMOTO in Banana Island 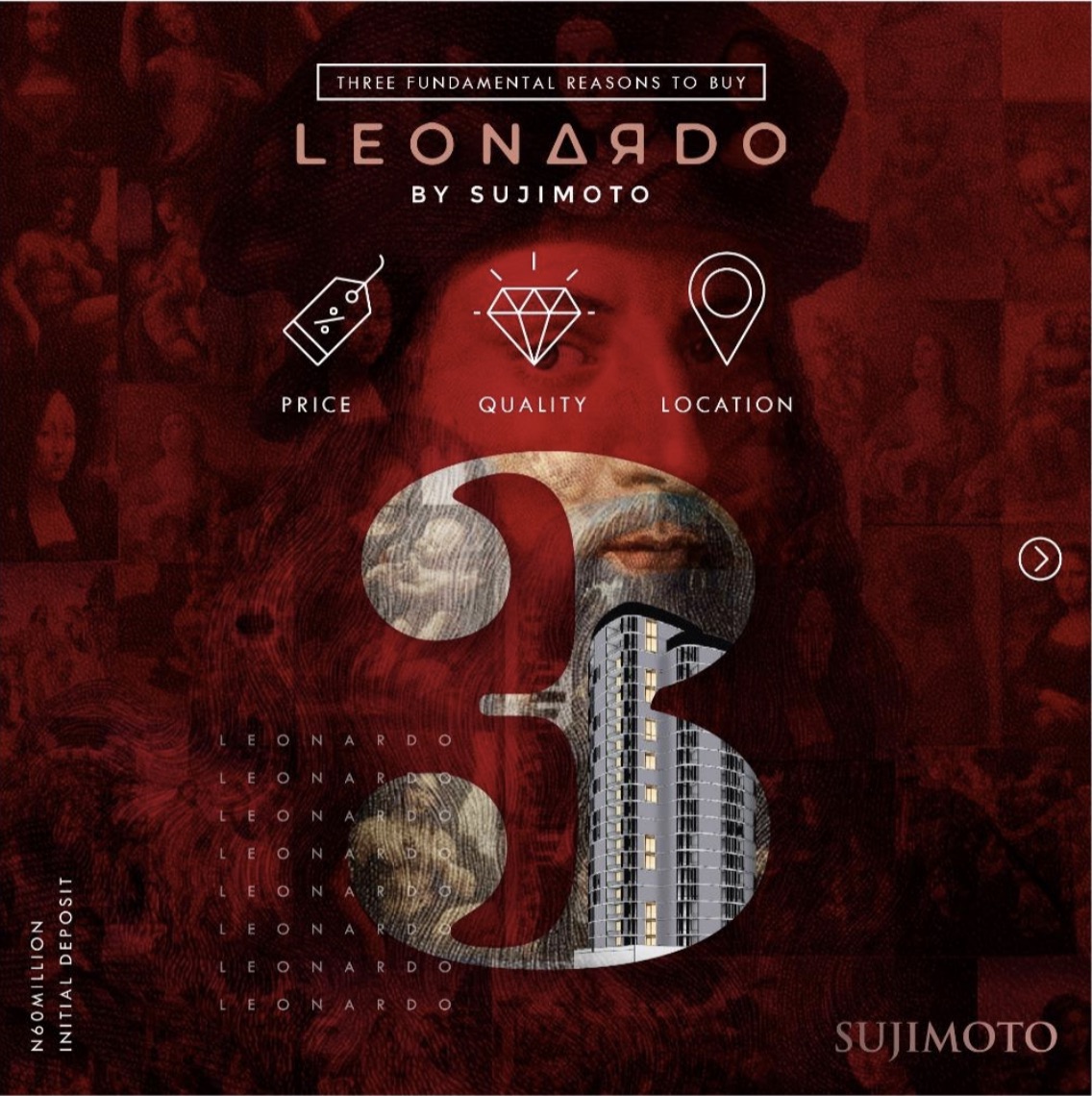 Location:
Dubbed as the most affluent neighbourhood in Africa, Banana Island houses the 1% of the 1% ultra-wealthy in Nigeria, making it the richest square metre in Africa. A 1000sqm land in Banana Island costs between N600 to 750 million, but immediately you step out of Banana Island, the same size of land costs N200 million less; while in other parts of Ikoyi, it will go for N300 million.

Banana Island is home to the ultra-wealthy few such as the Adenugas, MDs of Multinationals, Executive Directors, HNIs, Billionaires Businessmen, and Music Entrepreneur – Davido, to mention a few. 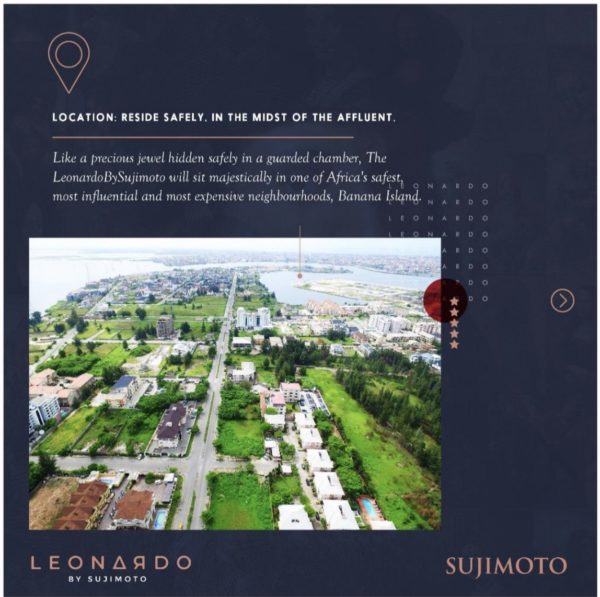 Quality:
All apartments in Ikoyi are not equal! 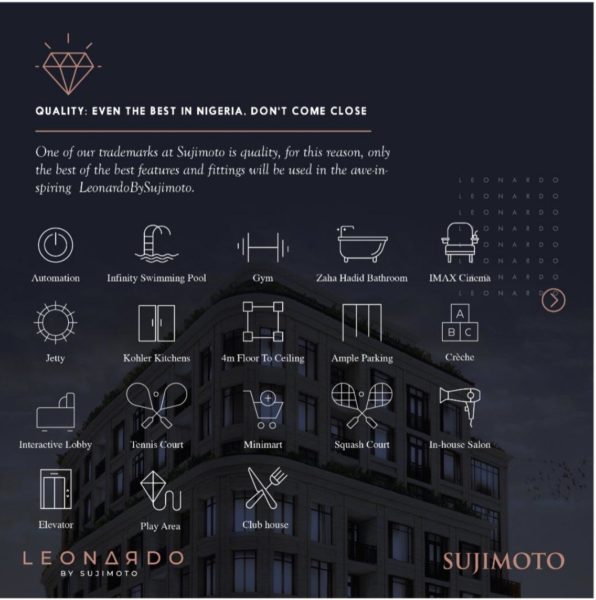 Though the most expensive 3 Bedroom apartment in Ikoyi and Eko Atlantic have the basic standard features such as gymnasium, swimming pool and lift and others, but we have not only done a market research but have also conducted a customer satisfaction survey to determine what Nigerians truly want and with the Leonardo project we are giving our clients a rare opportunity to enjoy exceptional features such as Private IMAX Cinema for the Residents, Indoor Virtual Golf where you can play on over 2500 golf courses in the world, Creche for the residents – first of its kind, Award-Winning Zaha Hadid Bathroom, no hotel in the world has the quality of our bathrooms; designer Kitchen by Kohler, Interactive Lobby with waiting area, Full Home Automation where you can control your door, curtain, music, light and TV from the touch of a button, Indoor salon, Club House, Mini-Mart, Tennis Court, State of the art Techno gym, Infinity Swimming Pool, Squash, Badminton, all of this features at N60million deposit! 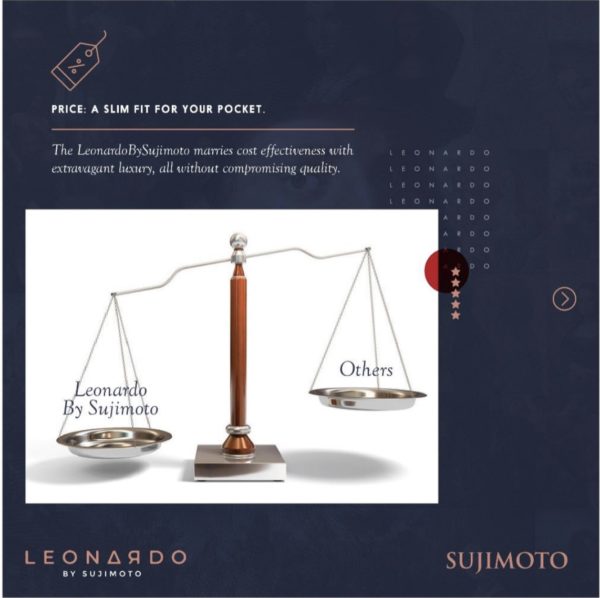 We have studied the best apartments in Nigeria. The most expensive 4 bedroom apartments today in Nigeria are in Bourdillon and Eko Atlantic and their prices ranges from $935,000 to $3.5millon which is about N420million to N1.5 Billion, while a 4 Bedroom at the LeonardoBySujimoto is selling for N300million.

At Sujimoto, we have studied their features and facilities, and what we are building is better than the combination of the two projects, at a steal! For the first time you can own a Sujimoto home (LeonardoBySujimoto) in Africa’s most expensive neighbourhood with as little as N60million (30% deposit) without having to break the bank.

No doubt, the Leonardo project is very cost-effective for now but note that the 3 Bedroom you are buying for N250million naira today will sell for 450million by the time we launch in November. 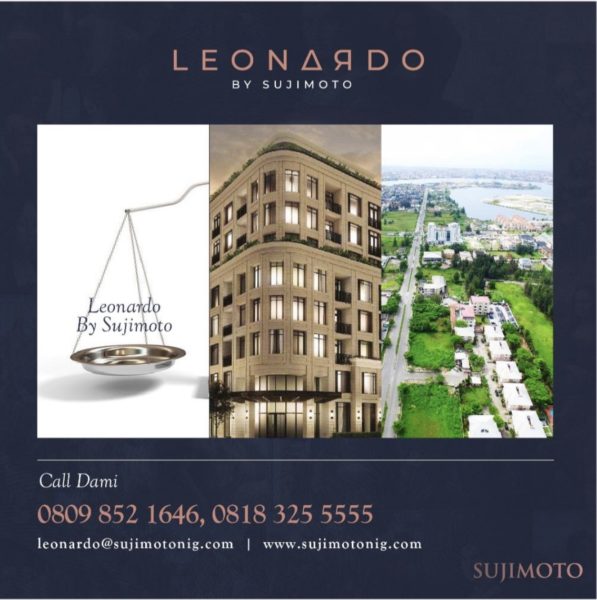