Did you watch day 17 of the Big Brother Naija 5 reality show? 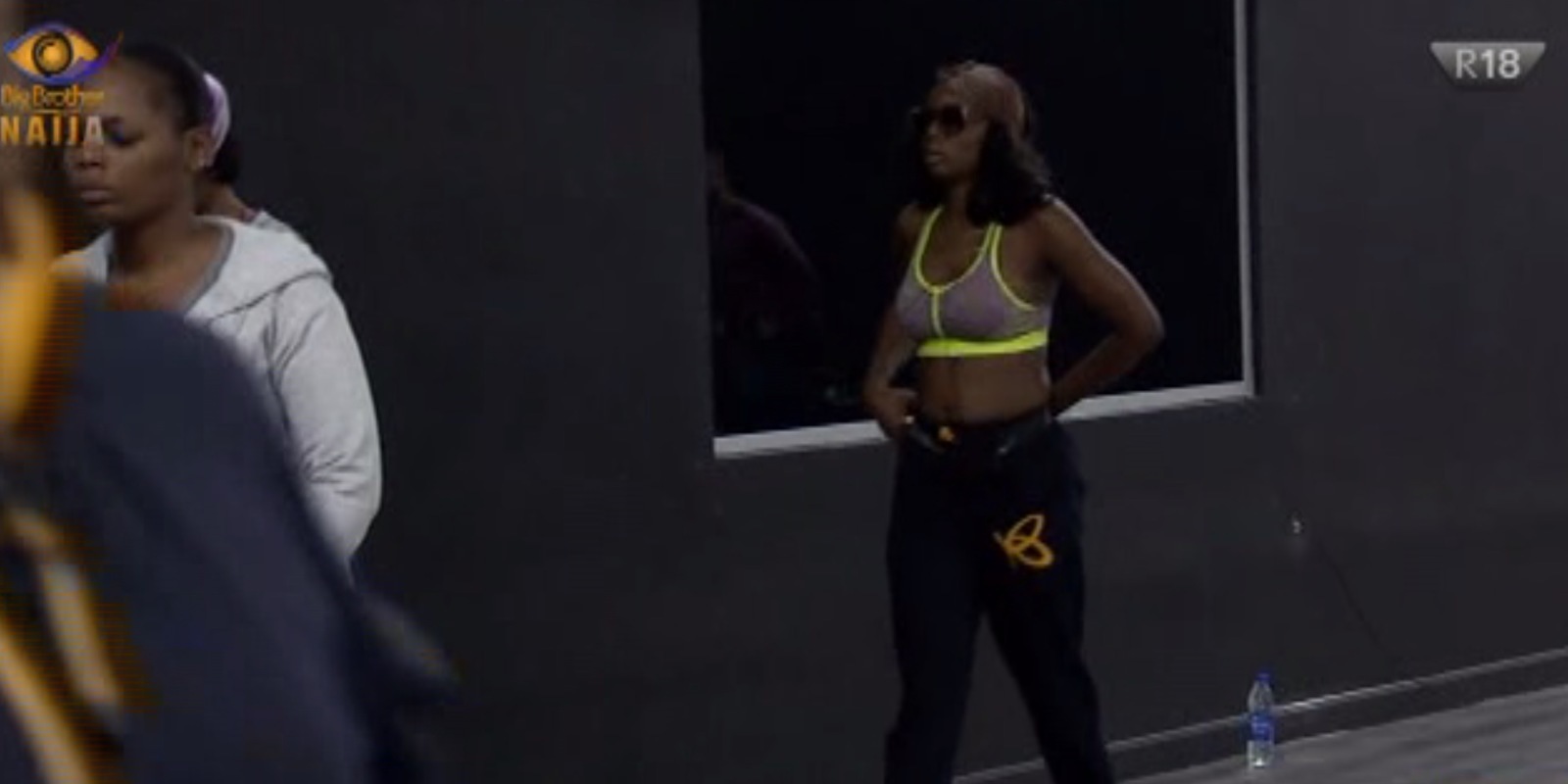 A ‘Fine’ workout is what you get for being lazy in Biggie’s House!

In life, days are never the same, and this could be said too for workouts in the Big Brother Naija House. The daily activity of exercising is a must in the Household and those who chose not to participate faced grim repercussions for their laziness.

The most encouraging Housemate today was Prince. He could be heard leading the session and trying to make sure that everyone gets the most out of their workout. Prince your fanaticism for fitness is fantastic!

His high level of enthusiasm is matched in work ethic by Kiddwaya. Kiddwaya once again gave his all during the session and was sopping wet with sweat by the time it was done. His work rate was spectacular, and even after workout time was finished, he continued doing push-ups in the House. When it comes to sweat, the kid doesn’t play. 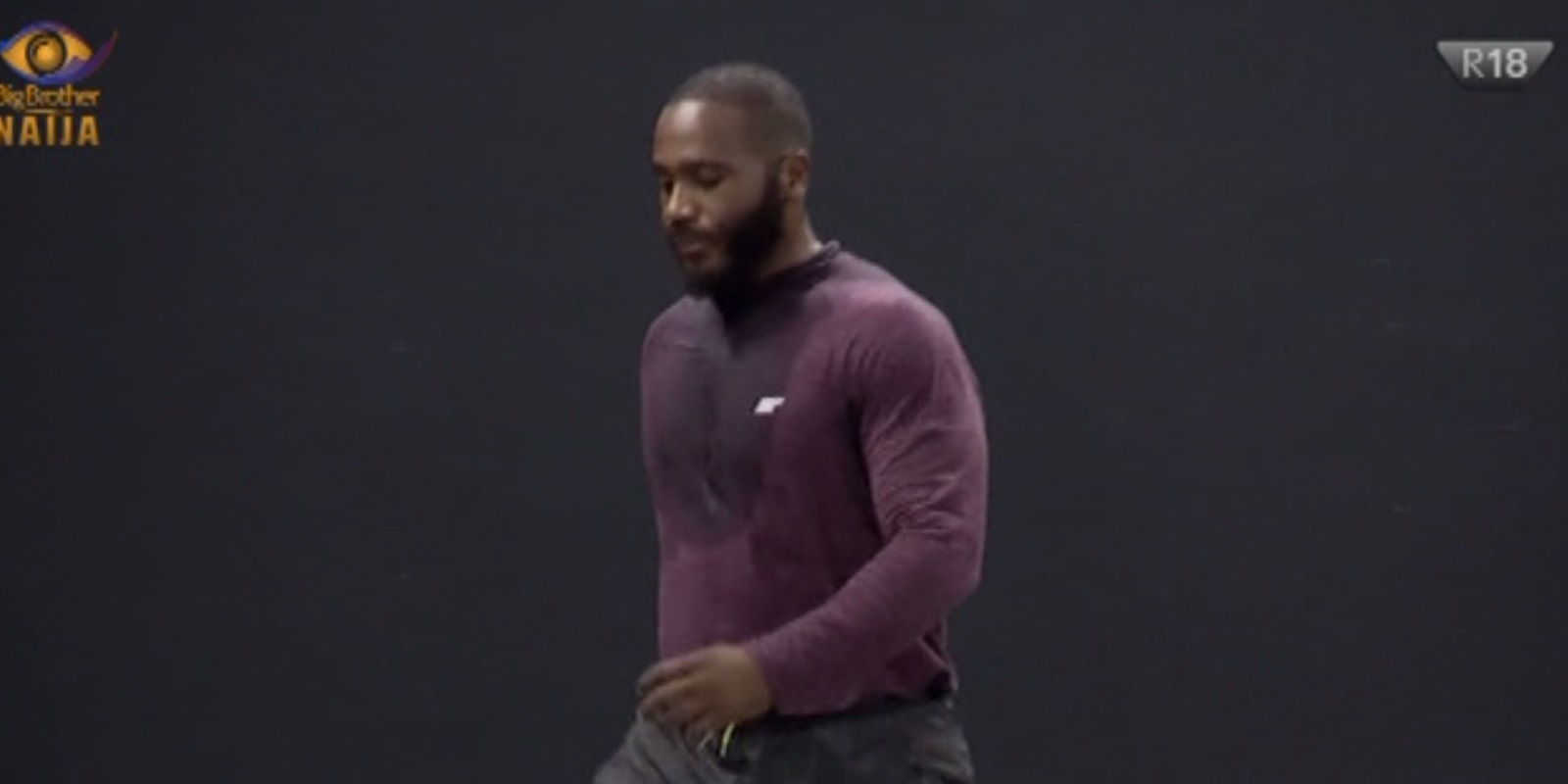 There’s no reason to look bad while getting the body looking good, Tolanibaj took this idea to heart and wore sunglasses throughout her workout. If fashionable fitness ever needed a spokesperson, she would be it!

Some days you’re in the mood to do it and on others, the mood isn’t there even if you are. The latter was the kind of workout Vee had as she willed herself to fight through the fatigue and embrace fitness. Even though she yawned quite often, Vee never stopped trying. 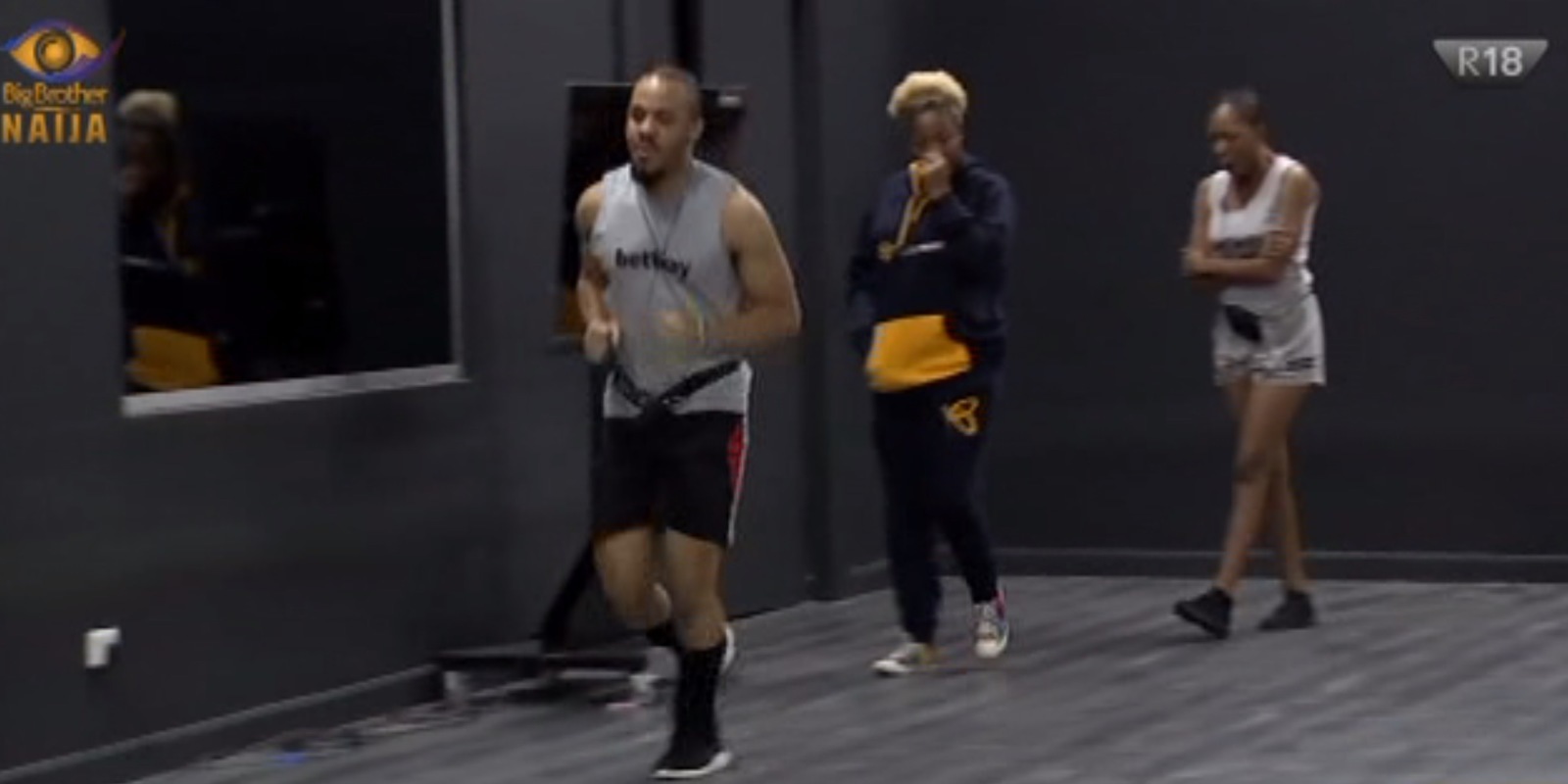 A Housemate who didn’t even get a workout in was Brighto. It wasn’t because he was injured like Laycon, but rather because of laziness. Working out in the Big Brother house is not an option, and Brighto slept through the entire session. His sweet dreams would have been interrupted by Biggie fining him for sleeping through the workout, but he slept through that announcement too. Let’s hope that Brighto learns from this and participates tomorrow, or waking up is going to become a bad experience for him every day.

Much ado about cleaning 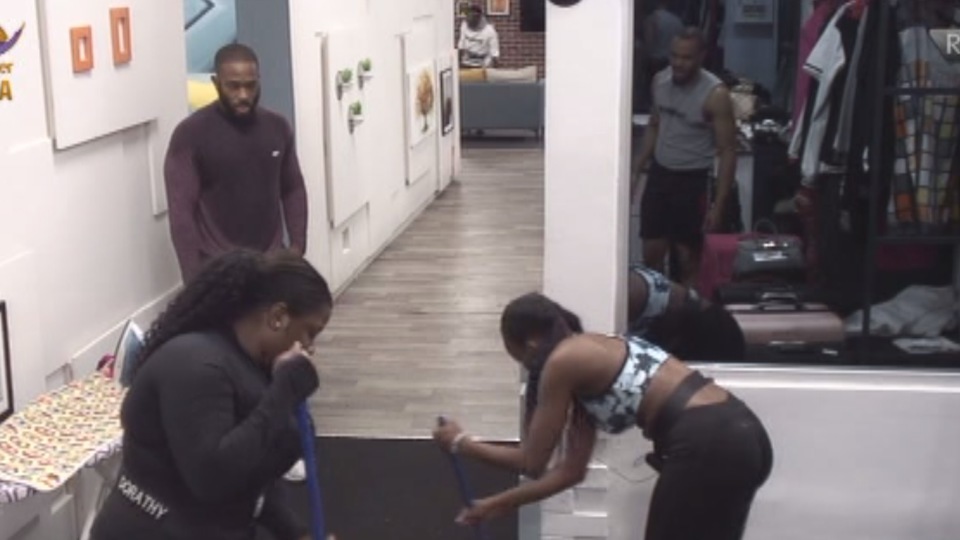 Cleaning Biggie’s House has become a frequent cause of conflicts and we examine where the fault lies and the possible solution.

One would think cleaning a House filled with 18 Housemates would be a lot easier seeing as there are more hands-on deck to assist but that isn’t always the case in the Lockdown House. Not that they don’t clean, but there’s so much ado about who does what, where and when they do it and how they are told to do it and because of this, the house sometimes becomes a mess.

No one likes being bossed around but to get a job done, sometimes, someone has to tell you what to do and how to do it. Granted that a few people don’t like being micromanaged, but still, there needs to be some form of direction and that’s where the Head of House comes in. It’s understandable to disagree with the method of the HoH, but a rational discussion to come to an agreeable method could help solve any conflict that may arise. But most times, it’s never always this way in the Lockdown House especially during morning clean up. A simple discussion soon turns into a shouting match with both parties failing to come to an amicable solution and end up doing whatever pleases them and eventually ranting to other Housemates about the high handedness of the other or how strong-headed the other is.

Could it be the HoH making things difficult?

Lucy’s time as HoH witnessed one of those conflicts. Right from the beginning of her tenure, a few of the Housemates didn’t exactly take to her for individual reasons and that didn’t really make her job easy. Also, a dictatorial style of leadership made it a lot harder. So, it really wasn’t a surprise when she and Tochi got into it over cleaning roles. Tochi’s main grudge was that he didn’t like being bossed around while Lucy insisted that his inability to figure out how to properly carry out his outlined cleaning role is why she was in his case. In the end, both parties did what they wanted and ranted to different Housemates.

Could it be the Housemate?

Kiddwaya and Deputy HoH, Dorathy almost got into it about who swept where, but calm heads prevailed. A brief explanation about why he decided to sweep somewhere else instead of where Dorathy asked was able to ease the tension and he added a bit of chivalry when he collected the broomstick from Dorathy and swept where she earlier suggested. So apparently, there are calmer ways to get the House squeaky clean instead of shouting.

It appears taking direction isn’t exactly the problem when it comes to cleaning the house. A lot lies in the hands of the Housemates involved and the current Head of House. In getting things done, a few things need to be in place. First, a leader that shows empathy and willing to guide people without necessarily bossing them around. If the Housemates aren’t favourably disposed to the HoH and style of administration, cleaning the House will remain contentious. Also, the Housemates must be willing to put their egos aside and yield to be led. Finally, like with all functional administrations, there needs to be a system that works. When you create a system that works with minimal adult supervision, there shouldn’t be much trouble getting the job done. Hopefully, future heads can put in place a good system and the Lockdown Housemates become a lot more cooperative.

Task time with Dulux in Biggie’s House and things got very colourful! 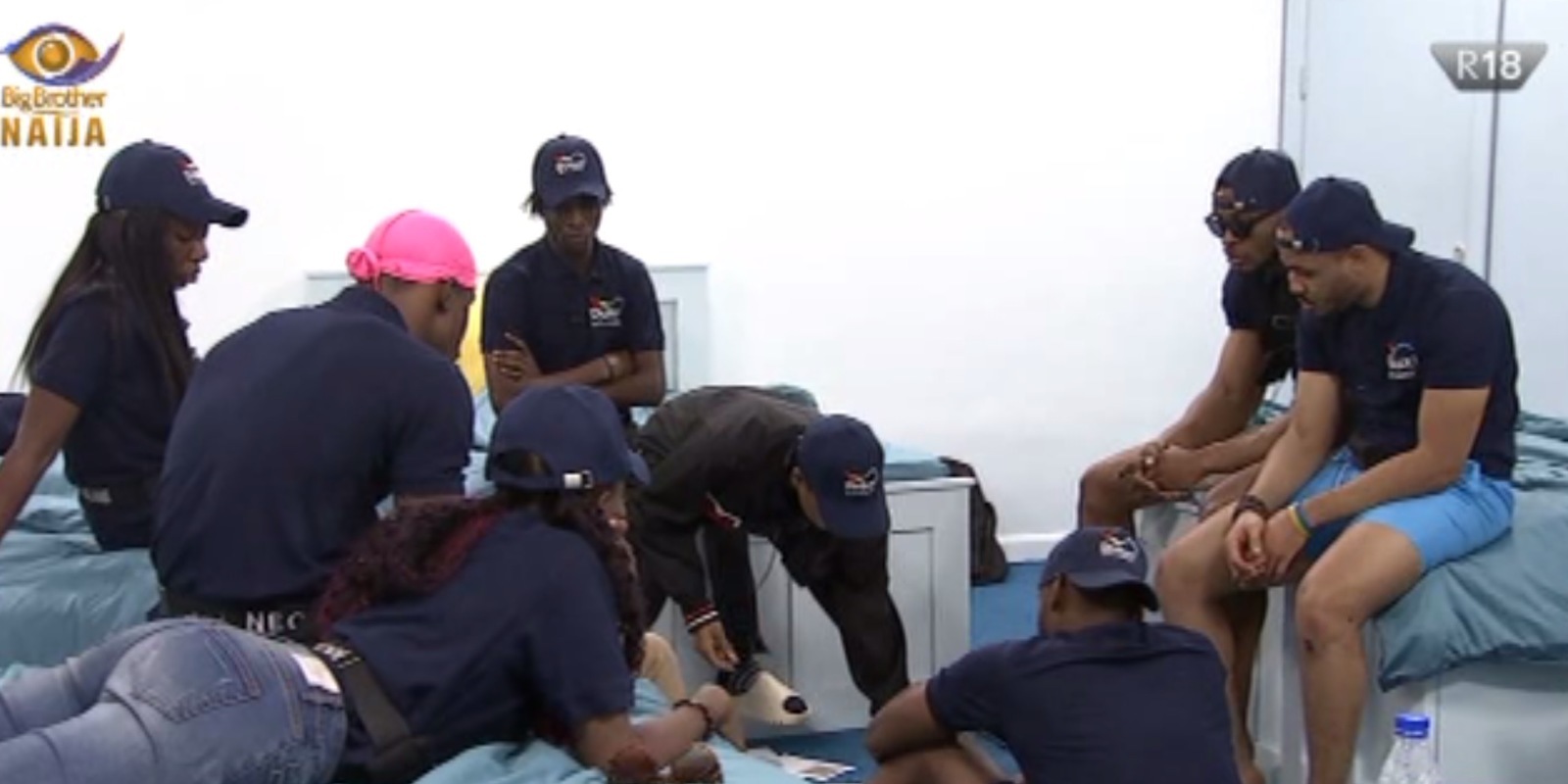 It’s amazing how a minute thing like colour can make a massive difference in your life. The Big Brother Housemates learned this as they were Tasked by Dulux to create a room for a young female working professional who loves bold style. The room they would be in charge of Anteroom, otherwise known as the reception, and it needed to showcase her love of art while blending in with the neutral colours of the house. The room also had to be warm and inviting while adding a pop of colour to the house.

A ballot system was used to divide the Housemates into two teams and the respective team’s names were Lunar Falls and Cornish Dawn, two of the most popular colours from Nigeria’s number one premium paint brand. After the teams were finalised, each team had to elect a leader and Kiddwaya was chosen as one with Ozo taking charge of the other. 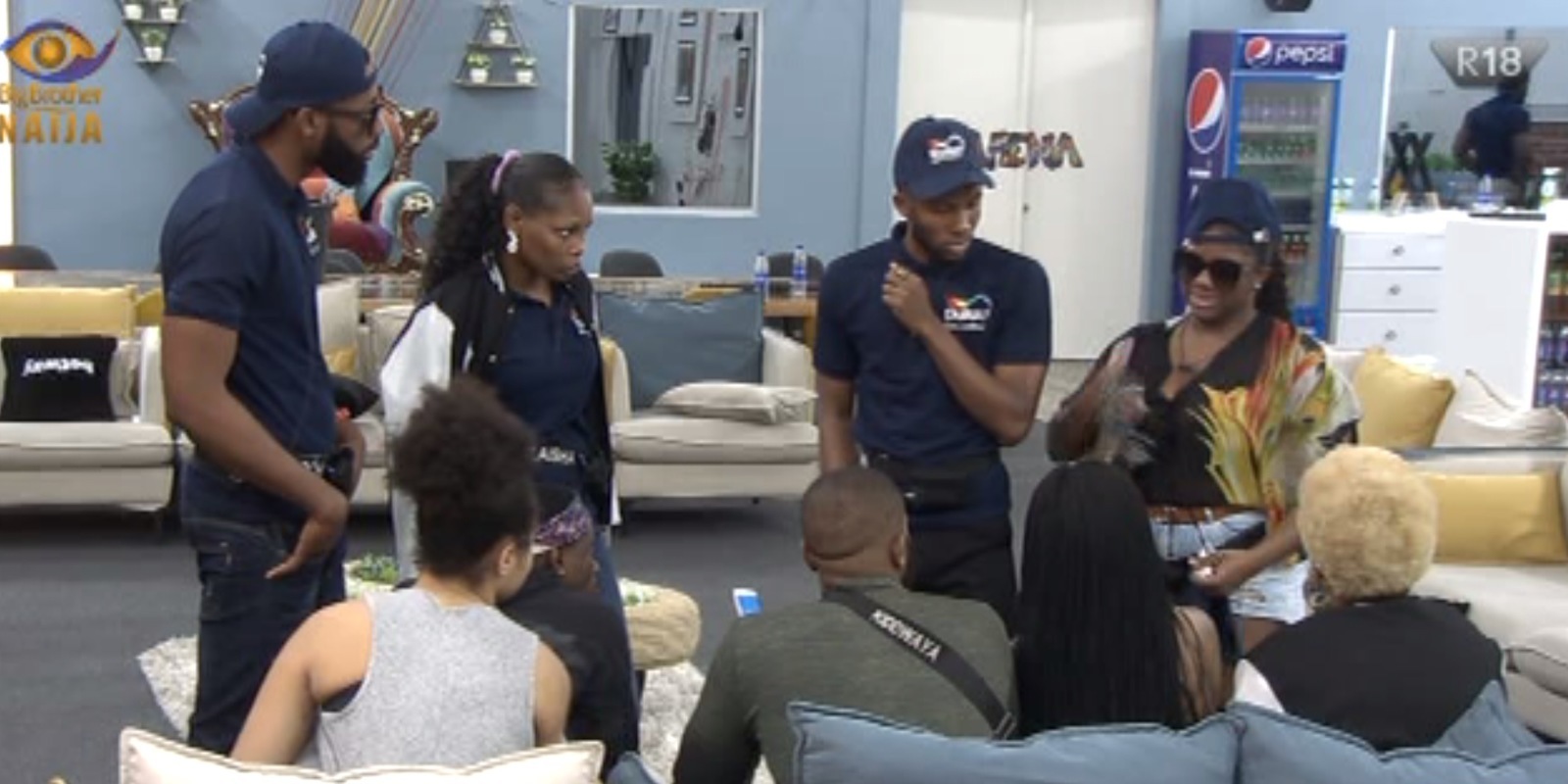 If you fail to plan, then you plan to fail and to make sure the Housemates know what they are doing design-wise the first step for the Dulux Design Task was to create a mood board. The mood board would incorporate all the colour, style, art, lighting, and accessories they plan to use for the task and guide them to their design choices according to the equipment that Dulux supplied.

Since designing for someone else is much harder than doing it for yourself the Housemates had a lot of in-depth conversations about what was needed and started the path to what was their most expansive and immersive task to date.

In today's @DuluxNigeria Challenge, team Lunar Falls scored a total of 83 points, while team Cornish Dawn won the Task with a total of 89 points.

When love doesn’t love you

Laycon struggles to take no for an answer.

All is fair in love and war, and when it comes to accepting that Erica won’t love him, Laycon is at war with himself. From the moment Laycon walked into Biggie’s House and set his gaze upon her, his heartfelt it had found its soulmate. Sadly every time he tried to make his true feelings known to her it has just ended in misery for the musician.

You have to admire how unrelenting Laycon is, but when it comes to matters of the heart, unrelenting can come off as pushy. When Laycon first approached Erica he made his intentions very clear and was friend-zoned almost immediately. Rather than take the message and move on, Laycon has decided that he press on and turn her no into a yes.

The more Laycon spits game the farther he gets from saying something that will change Erica’s mind about him. His chances at forever love with Erica have all but disappeared this week since Kiddwaya and her have started getting closer. It seems that the only people who think Laycon stands a chance with Erica are his fans who believe they will reunite on the outside once she realises that Laycon is becoming an icon.

Today while looking for inspiration to try preaching love again, Laycon got words of wisdom from Dorathy that nobody could have ever seen coming. She pointed out to Laycon that he might be better off as Erica’s friend. The friendship she reasoned is longer lasting and closer than a relationship if it’s one of good quality, and may also lead to love in the long run if it’s done right.

There’s no telling if he will take this sound advice to heart, or continue failing miserably in his attempts. Either way, Laycon has gained the love that will help him the most in Biggie’s House, the love of his fans.

Deciding where Wathoni‘s bed should be has set her on a warpath with Vee and it doesn’t look like there will be an amicable solution soon.