457 new cases of COVID-19 were recorded in Nigeria on Wednesday, August 5.

According to the Nigeria Center for Disease Control (NCDC), Lagos recorded 137 cases while the FCT had 76 new cases.

Nigeria now has 44,890 confirmed cases of the viral disease. 32,165 patients have been discharged with 927 deaths recorded so far.

A breakdown of cases by state can be found via https://t.co/zQrpNeOfet#TakeResponsibility pic.twitter.com/J4hMperURi

The Presidential Taskforce on Wednesday met with President Muhammadu Buhari at the statehouse Abuja, where they briefed the president on the efforts that have been put in place so far in the fight against the pandemic. The team led by Boss Mustapha presented its interim report to the President.

Recall that on  The extension of the current phase two eased lockdown which was announced on Monday, July 27, will elapse tomorrow, August 6.

According to Punch, Mustapha attributed the low number of confirmed cases to the reduced number of testing due to the Sallah holiday.

If you noticed, as we celebrated those discharges, there has also been a decrease in the testing. In the last couple of days, we tested just barely 2,000 across the nation, but we have a testing capacity of much more thousands than 2,000.

Another reason is that everybody is still in Sallah mood, even the essential workers. Remember when I talked of fatigue, this is part of it. But I know that in the next couple of days, the testing will be rampant because people would have come out of the Sallah celebrations and come back to work.

If you don’t do that, so much is happening as a result of the community transmission that has been cascaded into the local communities that if you wait for it to present itself, it will present itself in a very explosive manner and we can get into a panic mode.

We don’t want to have that. That is why are encouraging the state governments to go into the local communities to ensure that they search for those infected with this virus, test them, if they are positive, isolate them and provide care for them.

While briefing newsmen after the meeting, he also disclosed that new directives will be released on Thursday, August 6

As for the content of the report, it will be premature for me to talk about it because we submitted a report, we have submitted recommendations and so we have to leave for Mr President to take a decision. By the time I receive his approvals, non-approvals on the recommendations we have made, we will be able to speak to the Nigerian people tomorrow (Thursday).

There are now more than over 978,000 confirmed cases of coronavirus across the African continent, with a number of African countries imposing a range of prevention and containment measures against the spread of the pandemic.

According to the latest data by the World Health Organization Regional Office for Africa (WHOAFRO), the breakdown remains fluid as countries continue to confirm cases. 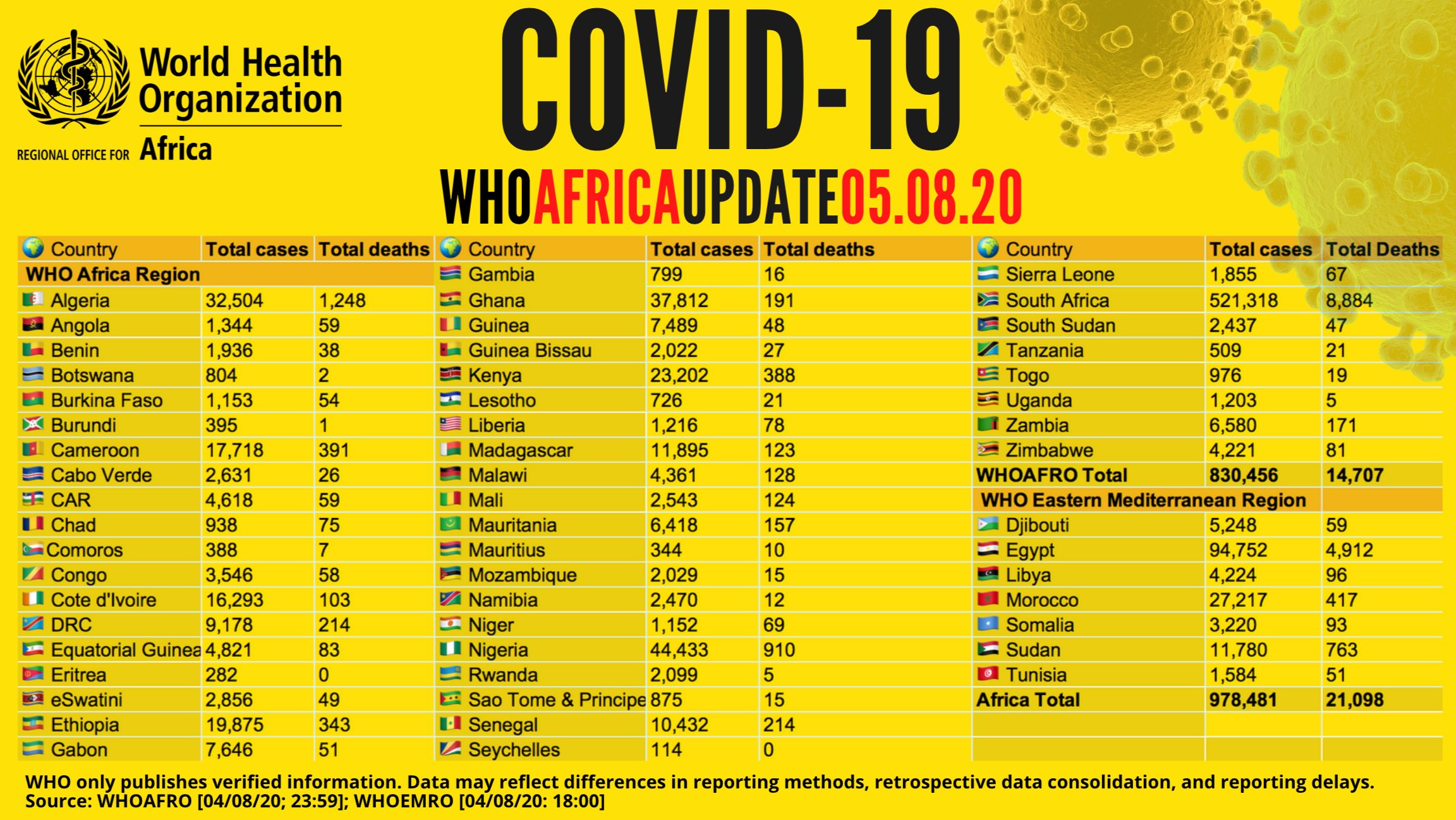 That brings the total number of confirmed infections across the country to at least 4,823,890, including at least 158,250 deaths. The totals include cases from all 50 states, the District of Columbia and other US territories, as well as repatriated cases.

Mexico reports more than 6,000 new cases in one day

According to CNN, the Mexican President Andrés Manuel López Obrador on Wednesday announced a minute of silence for Covid-19 victims, that will take place every day at noon across government offices and Armed Forces facilities in the country.

France has recorded the highest daily rise in coronavirus infections in more than two months, according to figures published by the National Health Agency on Wednesday.

France reported 1,695 new cases in 24 hours, making this the biggest increase since May 30, when an increase of 1,828 cases was recorded.

The number of coronavirus patients in hospitals and in intensive care units has decreased in the past 24 hours, according to the Health Agency data. The overall death toll in the country stands at 30,305.