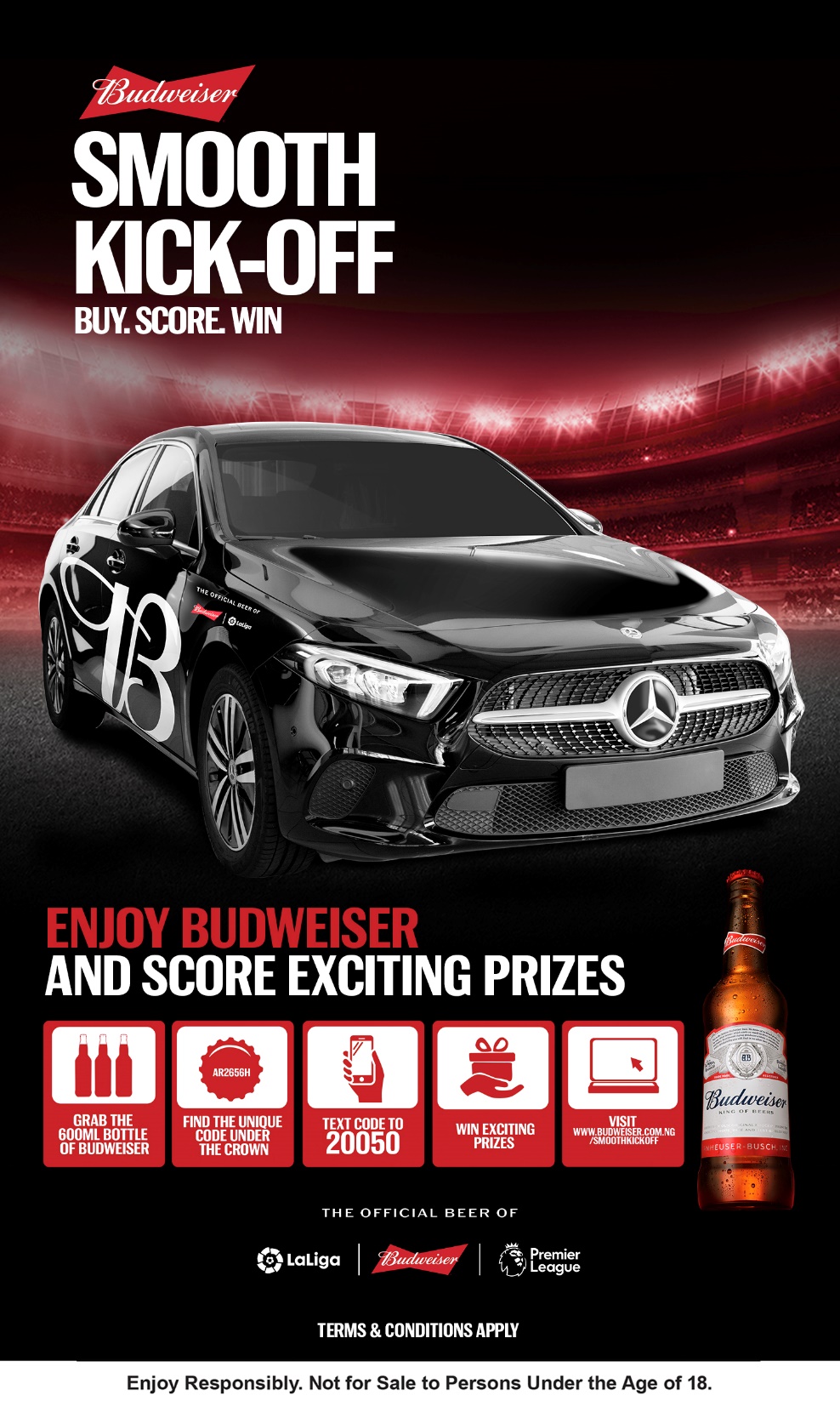 Budweiser lager beer is the official sponsor of the English Premier League and the Spanish La Liga, two of the top international leagues in the world.

To celebrate the recently kicked off football season, Budweiser the American style premium lager also called the King of Beers is set to excite consumers with the launch of a campaign tagged, “Budweiser Smooth Kick-off Promo”.

The under the crown promo invites consumers to send the code under the crown cork to 20050 or enter it into www.budweiser.com.ng/smoothkickoff to stand a chance to win great prizes when they buy a 600 ml bottle of Budweiser.

The more entries a consumer sends, the higher the chance to win any of the grand prizes which include “the new kid on the block” as far as Mercedes Benz is concerned: a sedan brand new, luxurious 2020 Mercedes Benz A200—powered by a turbocharged 2 liter, 4-cylinder engine, 188 horsepower, 17-inch alloy wheels, panorama roof, rain-sensing windshield wipers, a high-tech cockpit, classy, turbine-shaped aircon vents, column-mounted gear shift lever—and a rear multi-link suspension.

Consumers also have an opportunity to win the latest and biggest gaming console ever—the highly coveted, newly released PlayStation 5 Console which boasts of features such as the ultra-high-speed SSD, deeper immersion with support for haptic feedback, adaptive triggers, and 3D audios.

And that’s not all. As Budweiser recently announced Lionel Messi as a global brand ambassador, several lucky Budweiser consumers will be the proud owners of Budweiser Football Jerseys autographed by the living legend himself, Lionel Messi.

“We are known as the King of the Beers, and we are set to prove it once again with the Budweiser Smooth Kick-off Promo which will see 3 lucky consumers win the grand prize of a brand-new Mercedes Benz A200 each and 24 consumers will win the newly launched, ultra-sophisticated PlayStation 5 Console while other lucky winners would get a Budweiser Football Jersey each signed by Lionel Messi, Marketing Manager, Budweiser,” Jumoke Okikiolu said.

Budweiser is one of the premium beers produced by International Breweries Plc, a proud part of AB InBev, the world’s largest brewer with more than 400 beer brands. Budweiser is so Smooth; it is dubbed the King of Beers globally and chosen by Smooth Naija Kings that love superior beer.

Speaking further on the inspiration for the promo, Marketing Director, International Breweries Plc, Tolulope Adedeji noted that Budweiser is keen to elevate the football viewing experience for consumers. “We know that our consumers choose Budweiser when they socialize with friends during these football games and we want to reward them in a way that has never been done before, fit for Kings.”

“Our sponsorship of premium football leagues, the English Premier League and the Spanish La Liga, as well as the FIFA World Cup, have further endeared us to the hearts of our teeming consumers whose weekends are never complete without a combination of their premium football and their premium beer—Budweiser. We want our consumers to end what has been a challenging year on a high note,” Adedeji said.

The Budweiser Smooth Kick-off Promo will run for eight weeks between November 2020 and January 2021 and is only open to individuals who are 18 years and over.
Visit www.budweiser.com.ng/smoothkickoff for more information.