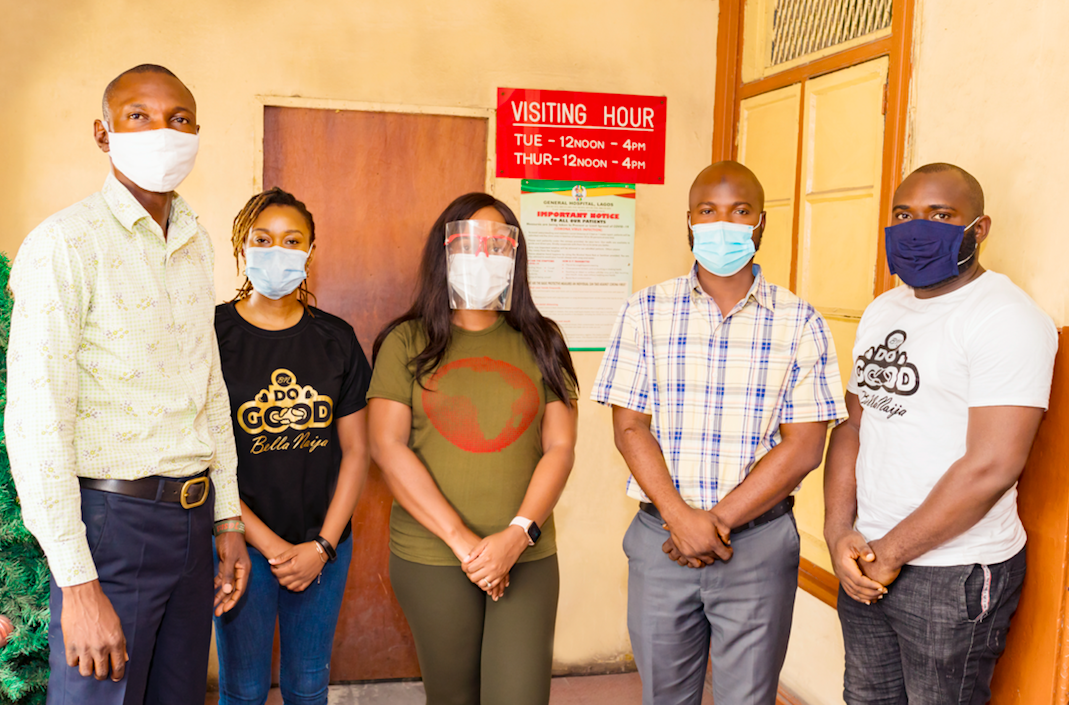 On Wednesday, December 30th, 2020, the #BNDoGood train journeyed to the Lagos State General Hospital, Odan, to spread some cheer and love this season, as it has done over the years.

It’s been a really crazy year, to say the least, and we decided to help people stranded in hospitals due to non-payment of their medical bills, offset those bills in time for them to spend the remaining part of the holidays with their families.

We heard touching stories from members of the Social Welfare Department of the hospital who expressed deep empathy on the plight of patients who couldn’t afford to pay their already subsidised medical bills. We met the patients, saw doctors and matrons. We observed two consultants excitedly share positive updates about the condition of a patient; you would have thought they were talking about a loved one. It was really heartwarming to see.

As part of our mission there, we covered the bills of patients who had been struggling to complete their payments. Their stories were touching and we were happy to put a smile on their faces and relieve them of their financial burden. Here are some of their stories:

July 5th, 2020. Femi’s job as a dispatch rider had him head towards Third Mainland Bridge when, unknown to him, a vehicle reversing on the highway hit him from the top of the bridge, making him fall off his bike and off the bridge to the road below, breaking bones in virtually all his limbs and hip. By-standers came to his aid and took him to Lagos Island General Hospital where he would spend almost 5 months receiving treatment and accruing a (subsidized) bill of hundreds of thousands, which he could no longer afford, by virtue of being out of job and exhausting savings and contributions from family and friends. On December 30, 2020, as part of our BN Do Good Project, working with the social welfare department of the hospital, Femi was able to go home to his family and spend the New Year at home, grateful he’s alive as well as not in debt.

Morenike fell ill weeks ago and was steadily losing weight and blood. She was then brought to the Lagos Island General Hospital where she underwent blood transfusion and some tests were done on her, which found out that she had a bacteria in her bloodstream which had spread to her heart. The doctors were able to trace the bacteria to a tattoo job she recently had which didn’t heal completely. The good news is that Morenike is feeling better, and the consultants gleefully stated that she’s recovering at an exponential rate, making it all better. Her family had expended all their resources, with her husband being out of work for the last 5 weeks, taking care of her while sourcing funds for her care. Thankfully, that has become a thing of the past and Morenike could go home as early as New Year’s Day after a few more procedures.

Asa was going about her daily business when she stepped on an object that injured her. It looked like a normal injury until it did not heal and she had to go to the hospital, with a decaying foot, aggravated by a pre existing condition – diabetes. Doctors have said she’s responding to treatment and thanks to you, our lovely BNers and clients – for your patronage – she has one less thing to worry about as her bill has been sorted as she prepares for amputation.

For 2 weeks, King has had no family member visit him at the hospital, not because they didn’t care, but because they had no money to transport themselves to the hospital. The relative who brought him to the hospital 3 weeks ago with an abscess on his right hip and another on his left foot complained of not having a means of getting back home, same as the one who visited two weeks ago. King has been diagnosed with cellulitis, a bacterial skin infection that could become life threatening when not treated. Add that he’d been diagnosed with diabetes, with the fact that he had no immediate family, wife and kids, it looked like the beginning of the end. But thanks to you BNers, clients, King is on the road to recovery.

Michael is currently being managed by three teams – Orthopedic, Dietary, and Dermatology – after he survived a gas explosion that damaged virtually all his skin. Michael was too tired to speak to the team, but we’re sure, that with one less thing to worry about, his journey to recovery will be sped up.

We’re so grateful to the BellaNaija community, the awesome BN team and clients for making this possible via your patronage this year.

We also encourage everyone who’ll love to support patients at the hospital to kindly visit and ask for the Social Welfare Office in the Administrative building.

Get Ready to Step Up with ‘The Liberty Church London’ Tonight by 9.00 pm | December 31st