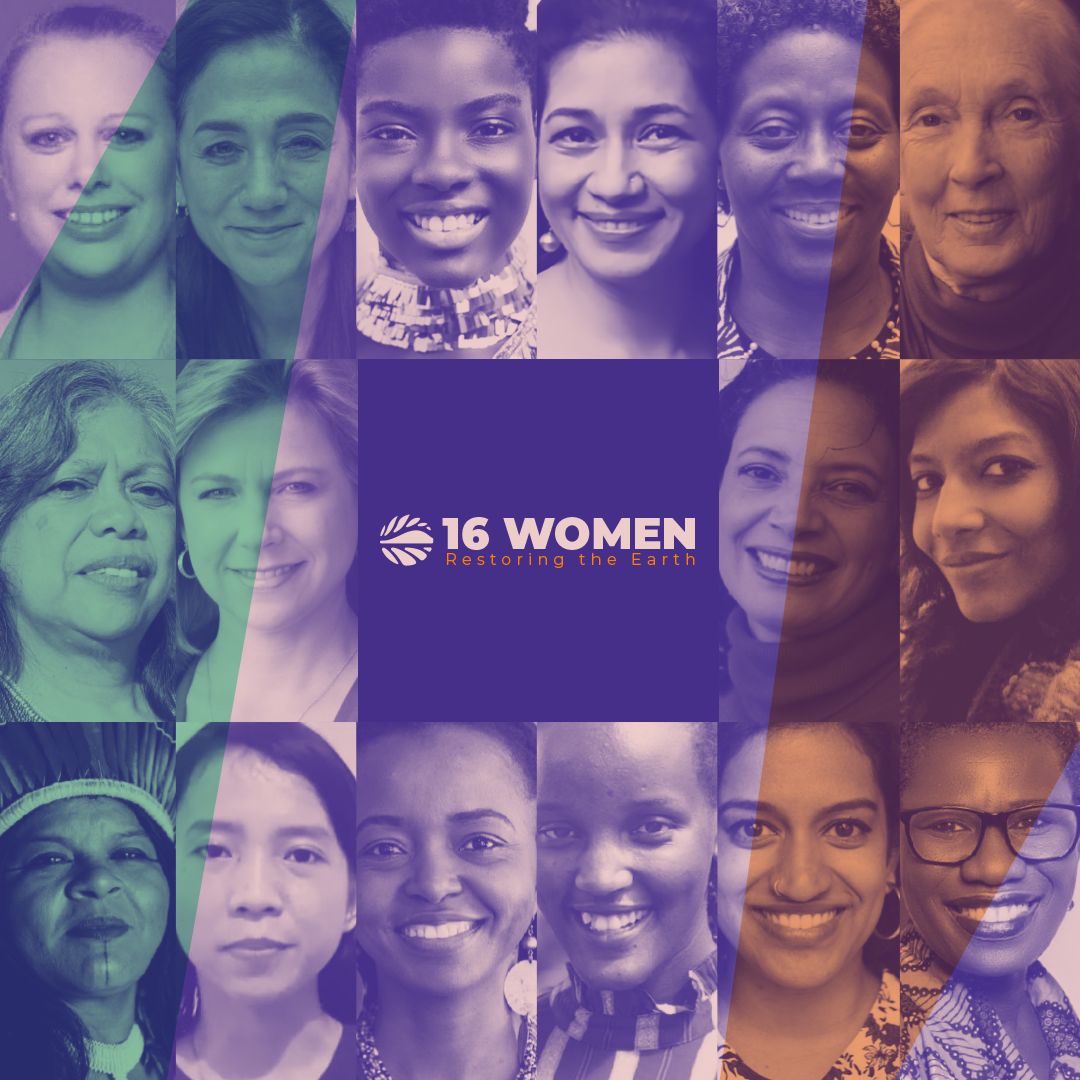 It’s the International Women’s Day, 2021! To mark this phenomenal day, the Global Landscapes Forum (GLF) is throwing the spotlight on 16 female leaders working to protect and restore the global natural capital through science, finance, policymaking, journalism, and land rights, among others. As the world enters the last decade to prevent irreversible damage from climate change, these women are challenging gender norms to secure the future of ecosystems – sometimes at great personal risk.

If current trends continue, 95 percent of the earth’s land areas could become degraded by 2050 and 1 million species could disappear in the next few years, further jeopardizing planetary and human health. From African metropolises to the cloud forests of Latin America to Asia’s financial systems, women environmental activists are leading the way into this year’s pivotal UN talks on biodiversity and climate change – daring economic and political powers, citizens, and consumers, to play their part in stopping cataclysmic global heating, mass extinction and the loss of livelihoods.

The outstanding contributions of these women, aged 13 to 86, are also aligned with the UN Decade on Ecosystem Restoration starting this year, the UN Decade of Action for the Sustainable Development Goals (SDGs), the climate action pathways outlined by the Intergovernmental Panel on Climate Change (IPCC), and pledges for a green recovery from the COVID-19 pandemic.

Meet some of these awesome women: 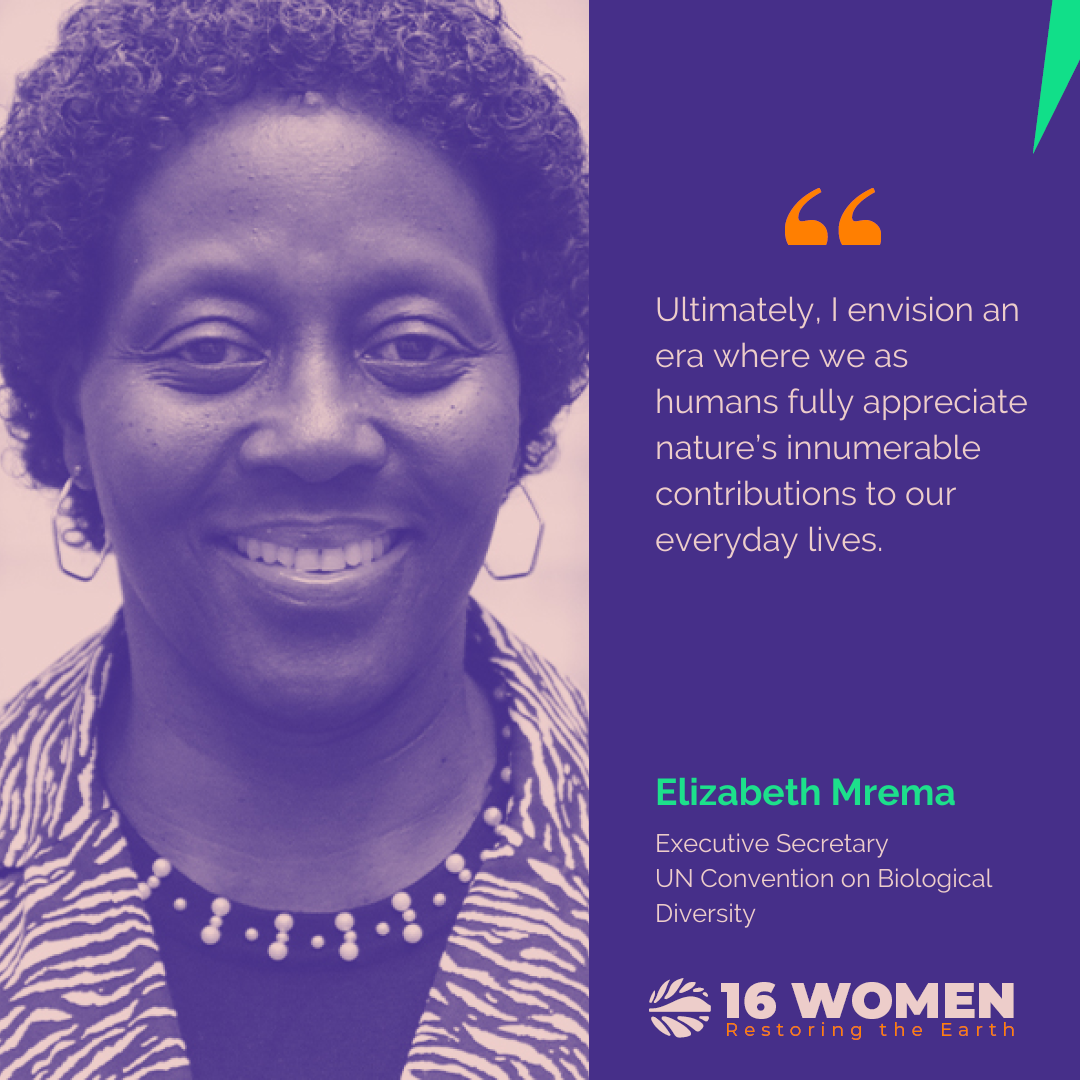 When she was appointed as Acting Executive Secretary for the UN Convention on Biological Diversity in November 2019, and then Executive Secretary in June 2020, Elizabeth Maruma Mrema became the first African woman to hold the role – a mere cherry atop her already extraordinary career.

Her duties are set against a backdrop of biodiversity loss that continues to accelerate, threatening the safe continuation of basic human necessities, such as food and the development of medicines. This is to say that her job is not just about saving the lives of plants and animals, but also saving those of humans.

Elizabeth’s job as the CBD’s Executive Secretary has not been the easiest occupation in the world, and it will only get more difficult as countries negotiate a new Post-2020 Biodiversity Framework, setting goals for 2030 and 2050, to be agreed upon later this year.

Elizabeth comes from a background studying law, working in the government of her home country Tanzania before foraying into international policymaking through various leadership positions at the UN Environment Programme.

As much as her experience prepared her to step into such a role, so did the landscape of her childhood, set on the slopes of Mount Kilimanjaro, among banana plantations fed by freshwater streams.

In the time since her youth, this area has degraded into barren dry land, the lush fields of fruit now gone. It is this firsthand view of biodiversity loss that fuels her realism about the present and her steadfast resolution that the future can, and must, be better.

Elizabeth “envisions an era where we as humans fully appreciate nature’s innumerable contributions to our everyday lives, ensure that these contributions continue and that we all, as citizens of our one and only planet, fully understand that biodiversity remains the answer for sustainable development challenges.” “If rains don’t come, then none of us survives.”

Vanessa Nakate is a 24-year-old Ugandan climate activist. Unlike many activists who capture their audiences with their outright confidence and impassioned speeches, Vanessa’s unadorned and softly spoken statements are worth leaning in to hear.

Vanessa began Uganda’s Fridays for Future movement as well as two other autonomous climate activist groups, Youth for Future Africa and the Rise Up Movement. She launched a fundraising campaign to save the Congo’s rainforest from its ongoing deforestation and is helping transition schools in her home country to sustainable energy through her Green Schools Project initiative. This coming fall, Nakate is releasing her first book, A Bigger Picture: My Fight to Bring a New African Voice to the Climate Crisis, about her own empowerment journey.

Through her activism, Vanessa is bringing everyone’s attention to climate change and its contribution to world hunger, “The moment you realize that communities’ water for drinking is dirtier and more contaminated than your toilet water– that is when you realize that this is a crisis. We need to get to the point of zero hunger. You can do something wherever you are. Use your platforms.” Yvonne Aki-Sawyerr has led campaigns against blood diamonds, co-founded a charity to support disadvantaged youth in the midst of her country’s civil war, and served as a director at the National Ebola Response Centre during the pandemic’s deadly outbreak before being elected to her mayoral position in 2018. It’s no wonder she landed on the 2021 Time100 Next list of influencers.

Yvonne’s mission is to clean up the city and improve the lives and lifestyles of the 1 million Freetonians not only now but for generations – her two children’s own – to come. Within the context of the “Transform Freetown” initiative that she introduced, the city council is employing sustainable waste management to improve the city’s infrastructure, reduce disease spread and empower youth through waste collection micro-enterprises along the way.

Her most recent ambition is to green the city by planting 1 million trees by the end of 2022, increasing vegetation in the capital by 50 percent, and in turn boosting biodiversity, slowing riverbank erosion, and contributing to the global bid for carbon sequestration.

Already, more than 250,000 trees have been planted, in backyards and at schools, on hillsides, and in urban neighborhoods. Her secret weapon to do so? The city’s citizens themselves. “Tree-planting can be a bit of a trendy thing to do,” she said at a Global Landscapes Forum event on biodiversity last year. “What really matters is that the trees are growing – that they remain there beyond the planting exercise, beyond the cameras. And to achieve that, the piece around the communities has been fundamental. It’s been giving our residents the opportunity to be tree stewards themselves… With that planting and that stewardship comes the basis for monitoring.” 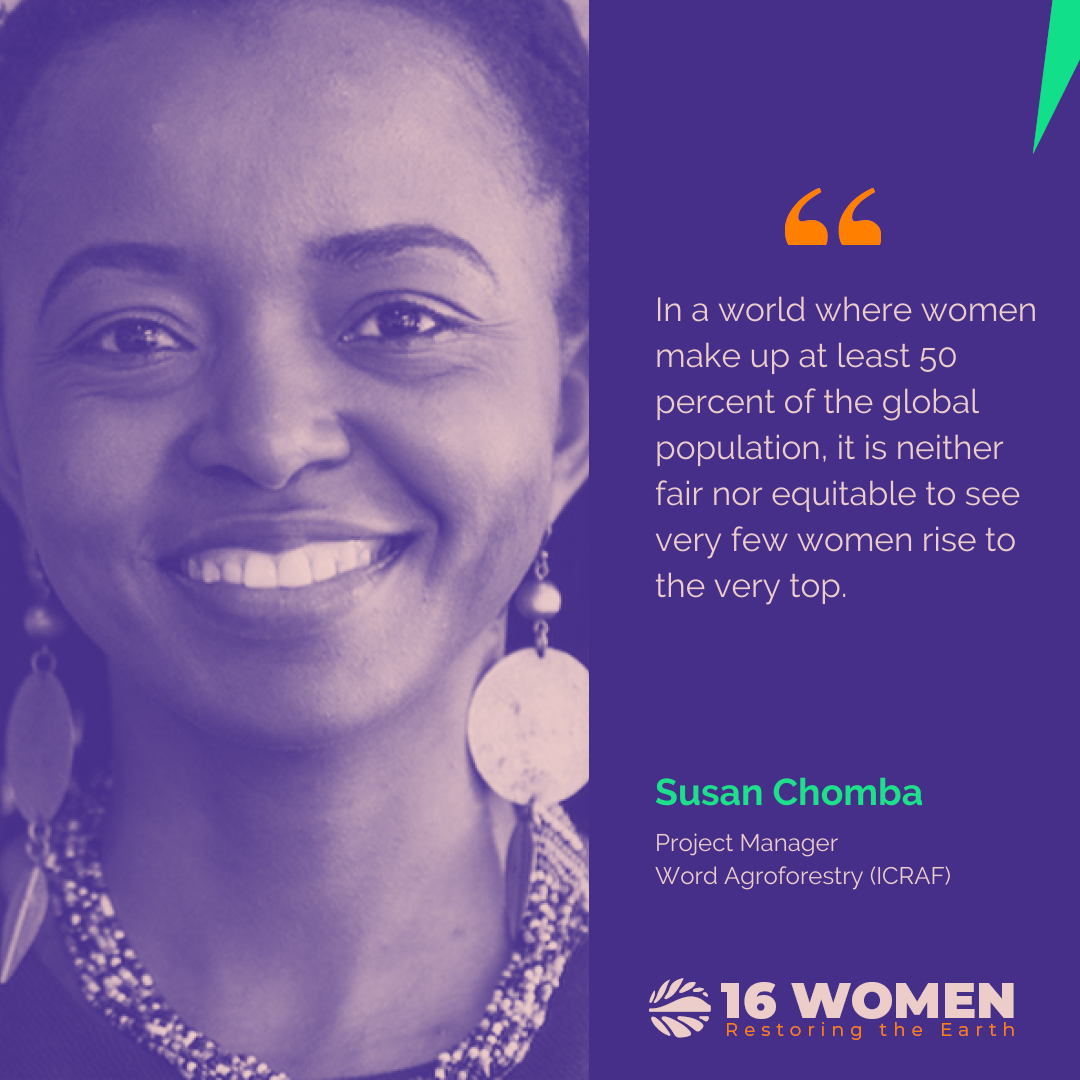 Since 2017, Susan has led one of the largest projects of the research institute World Agroforestry (ICRAF), Regreening Africa, which aims to achieve exactly what its name describes by giving farmers across eight countries knowledge and access to technologies to bring trees back onto farms and otherwise sustainably manage their landscapes. It’s been hailed as one of the center’s “megaprojects,” and is helping some 500,000 households benefit from the restoration of degraded landscapes.

The sounds of Susan Chomba’s youth were the cackles of hyenas, her grandmother’s voice telling tales over a fire, and the barks of baboons, which ran through her village on the slopes of Mt. Kenya with their babies on their backs. But this was a “short-lived” luxury; by her late teens, many of the native trees of her landscape had been chopped down by smallholder farmers clearing land for agriculture. Rivers and streams the forests had supported dried up, and the animal sounds went quiet, as biodiversity left for greener pastures.

Reversing the trends of her youth are not her greatest point of pride, but rather serving as a bridge between the practices of research and the processes of development.

In March 2021, Chomba will leave ICRAF to join World Resources Institute (WRI), a next step in her ambitions to continue feeding facts into the world’s forward motion, as well as gender equity, an issue that has revealed itself as imperative as any other through the course of her fieldwork. 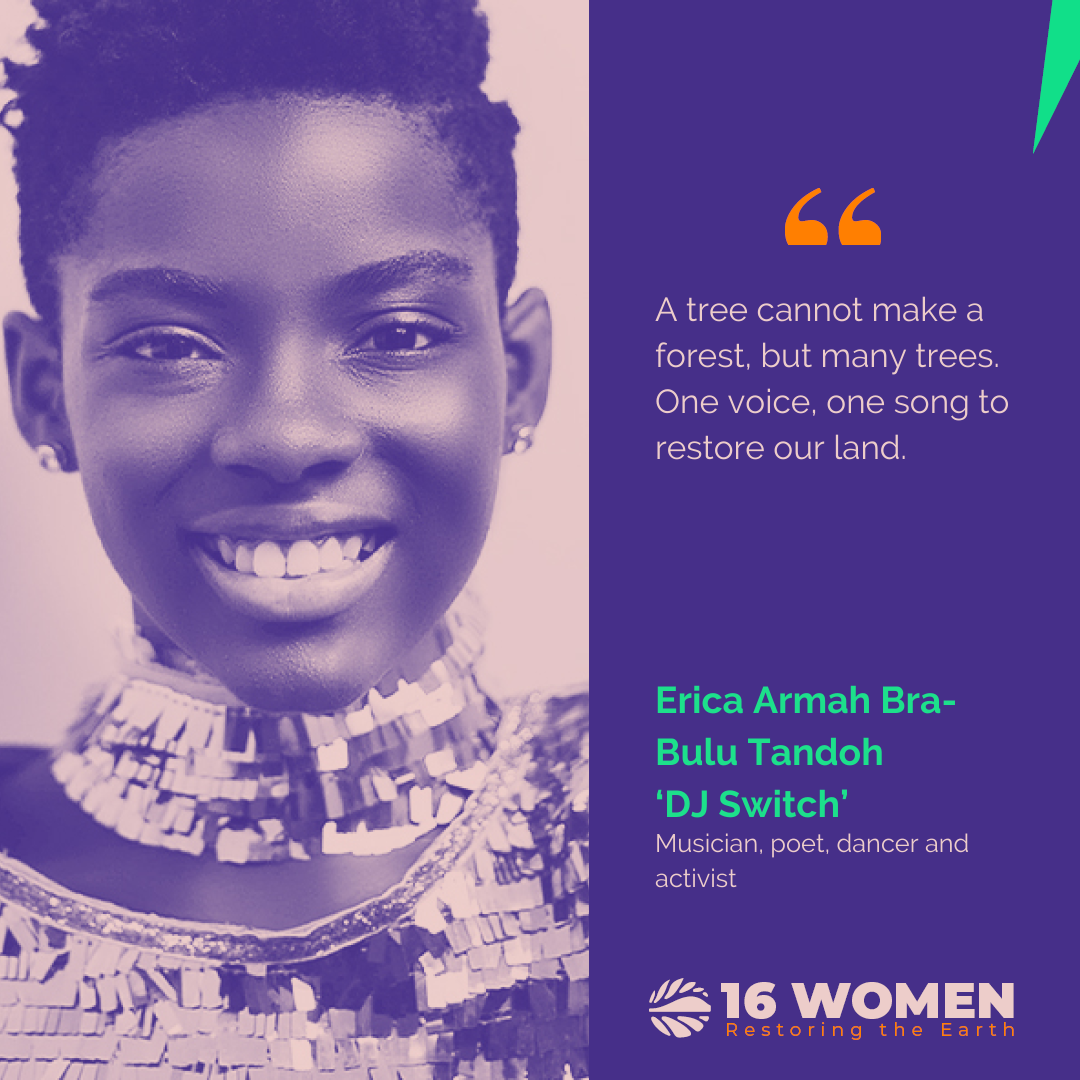 Having performed alongside Wyclef Jean in New York City, in front of Emmanuel Macron at a Bill and Melinda Gates Foundation gala, and spotlighted by Jay-Z’s Roc Nation label for Black History Month, DJ Switch, by the age of 13, has progressed further on the world stage through her ethos-driven music making than most aspiring leaders do in a lifetime.

Ghanaian Erica Armah Bra-Bulu Tandoh goes by the DJ moniker “DJ Switch” because she likes to use her music to switch people into a positive mood, but she has ambitions that far exceed this. Already, she has established the DJ Switch Foundation to support underprivileged Ugandans, and she eventually hopes to be a gynecologist. And perhaps that’s the reason for her success – her dreams for the future do not in any way hinder her desire to make change in the present.

“Every song has a dance,” she said at a Global Landscapes Forum event in Accra in 2019. “Imagine if a song on tree-planting goes viral with a particular dance, where everyone would be singing and dancing with a tree to plant.” “In 2019, almost 90 percent of the deaths of environmental advocates in Brazil occurred in the Amazon. In less than a year, my own people, the Guajajara people here in Maranhão, lost five guardians of the forests – all of them murdered.”

These are the stark words of Brazilian Indigenous leader, Sônia Guajajara, spoken upon receiving the Letelier-Moffitt Human Rights Award in 2020 on behalf of the Association of Indigenous Peoples of Brazil (APIB), which she leads. The APIB, considered the largest umbrella organization representing Brazil’s Indigenous tribes and their 900,000 people, received the award for its activism against greedy corporations and the oppressive Bolsonaro government regime causing death to Brazil’s critically important ecosystems and their native custodians.

Sônia regularly advocates for Indigenous rights at U.N. conventions, and in 2018, she became the first Indigenous person to run for federal executive office in Brazil when she was a vice-presidential running mate alongside Partido Socialismo e Liberdade, the Socialism and Liberty Party of Brazil, candidate Guilherme Boulos.

Often appearing with her face artfully painted and in vibrant, decorative headdresses, Sônia goes beyond being a representative to an emblem, a manifestation of the many cultures, beliefs, and lineages for which she advocates. Her work comes from her soul, and her soul is one of a warrior.

Other women leading the earth’s restoration are: