Everything Kemi Adetiba Said During Our Live Twitter Chat 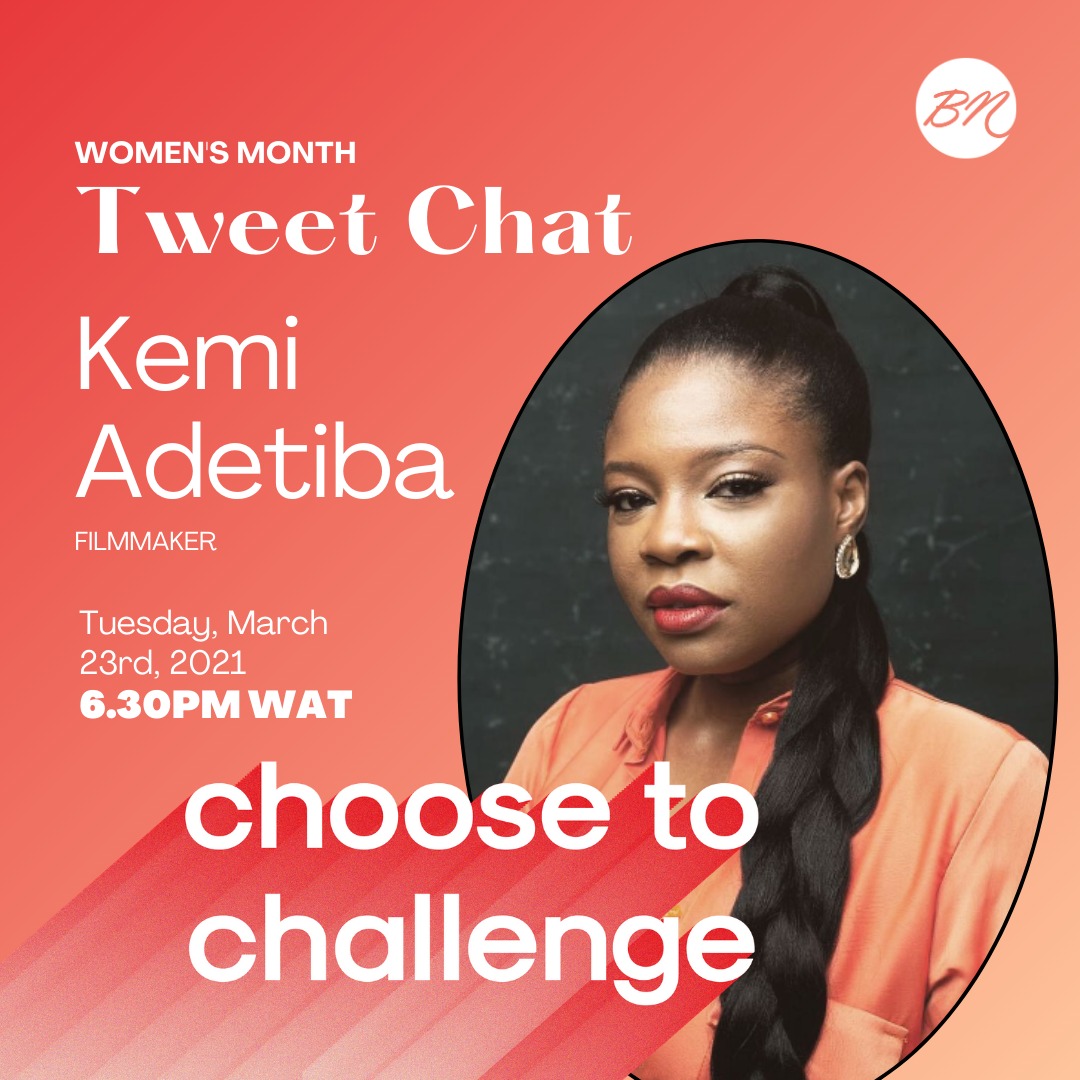 All through March, we’ll be hosting a series of Tweet Chats with women who are helping to forge a gender-equal world; women who, in line with the theme for this year’s celebration – Choose to Challenge – are tackling gender stereotypes, celebrating women’s achievements and raising awareness against bias.

To continue our Women’s Month conversations this week, we spoke with award-winning filmmaker Kemi Adetiba, about her career and how she’s challenging norms that stand in the way of a more equal world.

Here’s everything she shared:

What does the International Women’s Day theme, “Choose To Challenge”, mean to you?

For me personally, it means challenging boxes, the norm, stereotypes, bias. It means, “rattling the cage.” And when we gain attention from all that rattling, using it to effect a change that pushes OUR agenda forward.

In your opinion, why is it important that more women take up space in the Film industry?

For the same reason, they must take up space in any industry. WHY NOT? Asides from the fact that gender equality and balance shouldn’t have to be negotiated, let’s look at it from an underserved perspective. We bring a colourful, instinctive, curious outlook on various subjects and storylines. Art isn’t one dimensional. The film is ART. The film is LIFE.

You cannot properly represent life, without the voice of a woman. You cannot fully represent art without the submissions of women. And there are also many subjects women are simply more inclined to serve better e.g if we were telling a story on childbirth for instance – no matter how intuitive a man is, the story would be underserved without the perspective of a woman. Same with Love. Same with LIFE! Also, women have this basic instinctive creativity, but some might say that’s subjective.

What barriers have you faced to becoming successful in the film industry? How did you overcome them?

LOL… This question ALWAYS comes up in EVERY interview I give. It’s either the first question shooting out the gate, or buried somewhere in the middle. Why? Because I am a woman, and SURELY this must have caused me problems in my climb to success.

I am going to answer the exact way I have done all other times. Have I faced a number of obstacles solely because of my gender? Of course! But do I want that the focus in this interview? NO. Why? Because little Ireti might be logged on with her last data to catch this tweet live.

And she wants to know what she can do to break in just like I did. She is very impressionable and I’m sure a lot of people have told her filmmaking is a “man’s industry” and she has no place. I wouldn’t want her discouraged by my ‘barriers’. I’d rather her encouraged by my success.

So while YES there have been barriers, the fact is I AM HERE!! And that is all I want her to know. Will it be easy? NO.. but despite all that, I AM HERE! And I never had to compromise my values or principles for it. So it is POSSIBLE. I had a dream. I had a plan. I worked HARD.

I worked SMART. I took advantage of the opportunities that furthered along with my agenda. I CLEARLY saw my goal, and stubbornly refused to pay any mind or focus on anything that would deter me from it #OperationFaceYourFront

And I had mentors – mostly in my head. People that lived and spoke to the woman I wanted to be in this industry. These women didn’t know they were my mentors from afar. But I thought… If THEY could do it, then I could too. This is why representation is so IMPORTANT!

What do you think about the impact of women so far in the film industry, most especially in Nollywood?

Ohhh… I think it’s amazing. I think it’s inspiring. I think it’s encouraging. I was looking at a mentee’s insta-stories day and saw this young girl in a crew outfit march onto set carrying equipment. MY HEART WAS GLAD. She marched as she belonged there. I didn’t know who she was, but I sent a message for them to tell her WELL DONE.

When I started, I didn’t feel I belonged. People TOLD me I didn’t belong. I was called “princess” in film school. This wave of women infiltrating core positions outside ‘front of the screen’ makes my heart SING!!! But YES… I think more can be done. More training. More access. More representation.

If I, Kemi Adetiba, who is already established, can see some random 25-year-old girl who is confident in her place, and position on set and feel inspired to do more. Imagine the other young girls who have nothing but a dream, who come across that same video!!! HAAAA!!

What’s the most important piece of advice you’d give to a woman thinking of starting a career in Nollywood?

DREAM – There’s this J.Cole line that I love, “They say anything’s possible. You gotta dream like you never seen obstacles.”

In dreams, you can do the impossible. When people wonder about my audacity, it’s because even in real life, I am effecting all that has been in my dreams. In dreams… you can FLY. My superpower is that I don’t leave all that bravado on my pillow. I bring it into real life. I come up with the most hair-brained ideas and have people constantly tell me they’re crazy. But do I listen? Mostly NO! Let me find out for myself, mbok.

Do you know how many people told me a 3hr movie in cinemas wouldn’t work? AND not a comedy? DREAM! And throw blinders on. One of my fav moment’s in the docu, THE DEFIANT ONES (Dr Dre story) is something Jimmy Iovine said. He said… “When you’re a racehorse, the reason they put blinders on these things is that if you look at the horse on the left or the right, you’re going to miss a step. That’s why the horses have blinders on. And that’s what people should have.” I DON’T LOOK AT ANYBODY!! No one is running my race but I. Again #OperationFaceYaFront.

Look, it’s very easy for people to project their insecurities on you. Because YOU can’t do it, don’t mean I can’t!! Let me go to the front and find out for myself. And if I do it, I’ll send a car back for you. Simple.

One more thing… When you get to a position of influence in the industry, don’t pull up the ladder. Don’t be horrible to other women trying to get their own ‘come up’ because you fear competition. That’s HORRIBLE. I had a few women do this to me. STILL do. It makes/made me very sad. But I also vowed that I would become that person I needed at that time (need now) whenever I get to a position of influence. The sky is big enough for everyone. How many birds do you see fighting for space in the air? There is enough space, boo.

As women, how do our individual actions, conversations, behaviours and mindsets have an impact on our larger society?

To whom much is given, much is expected. Abi… Isn’t that how the saying goes? We, unfortunately, live in a world now, where a lot of generalization goes on. One woman can be held accountable for the transgressions of another. Is it unfair? EXTREMELY, however…

You know what? Let me use myself as an example. I’ve become increasingly aware that my every step can throw feedback onto another group of women. Both the good.. and the bad. Whether I like it or not. Is this a lot of pressure? YES. And while I will still live MY LIFE, I also understand that this is a fact whether I like it or not. There are people that I am carrying on my back. Just like there are people that carried ME on their backs.

The rule of life is for every action, there is a reaction. It’s even science, sef. “The streets is watching.” And while it is imperative to live your truth constantly, it is also fair to ask that one is always aware of the bounce-back that might occur with every decision. Not saying we conform to anything. Just saying we are staying AWARE. We stay sharp. We use sense.

And from that awareness, we can then make decisions that we are SURE that we can live with. Do YOU – But always be aware of the repercussions of your actions, and if you’ve made peace with them. ROCK ON! Everyone else will be alright.

Many issues are clamouring for the first position so it’ll be hard to limit to just one. But a few are Adequate Training, Access (to positions, and funds). I’m trying to keep the answer short and cute this time. I think the above is fairly self-explanatory.

How important is it for women to lift each other and what does that mean to you?

Extremely important. As I mentioned earlier, while many women helped lift me to where I am now, there were a few that were absolutely HORRID. It’s important we do away with this “crabs in a basket” mentality. We’ve been pitched against each other for too long.

Women need to come together and be goal-oriented. It brings out the best in us and helps our cause as a whole. We shouldn’t only celebrate “Women’s Month” in the mouth only but in action. This mission truly takes a village. Remember the Voltron TV show? Many parts…

I wouldn’t be where I am today without the inspiration and support of many women. We need to learn the power of collaborating, instead of competing. We can kick the ball farther.

What is the most important thing you want young women who are challenging the status quo to know?

You have a PLACE your voice is VALID. Don’t let anyone tell you otherwise. Even I need reminding sometimes.

Belinda Effah Will Now be Known as Grace-Charis Bassey Effah