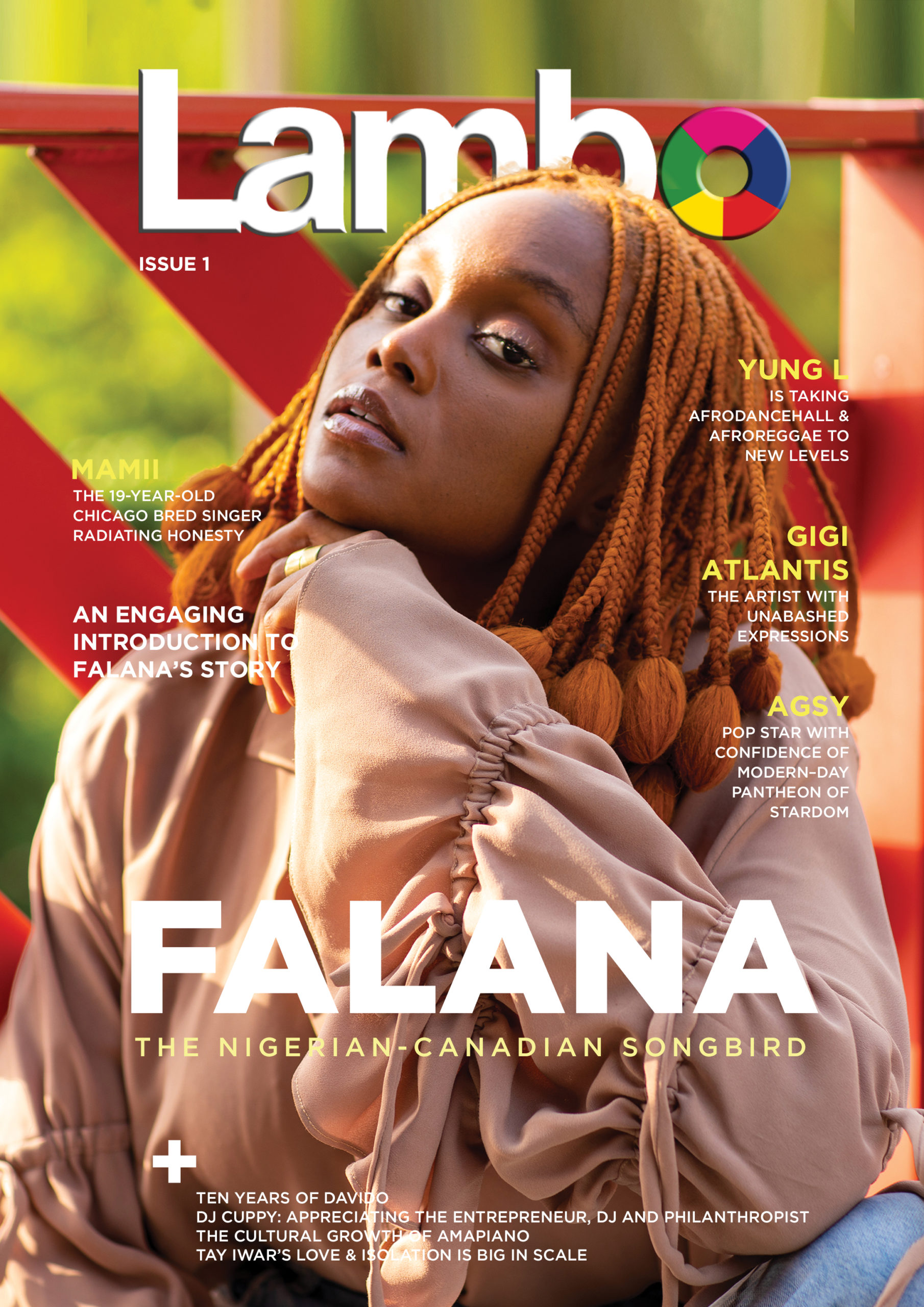 Singer-songwriter Falana is the latest star to grace the cover of Lambo Xtra magazine’s newest issue and she talks about her recent documentary, creativity, sound influence and more.

Describing the singer, the magazine writes:

Since the release of her debut EP “Chapter One” in 2019 and the chart success her 2018 single “Ride or Die” gained, Falana has been among one of the young promising acts to grace the industry recently. Her musical style can be described as a modern soul expertly fused with a more vintage sound. It is this unique musical pattern that sets her apart from all her peers. 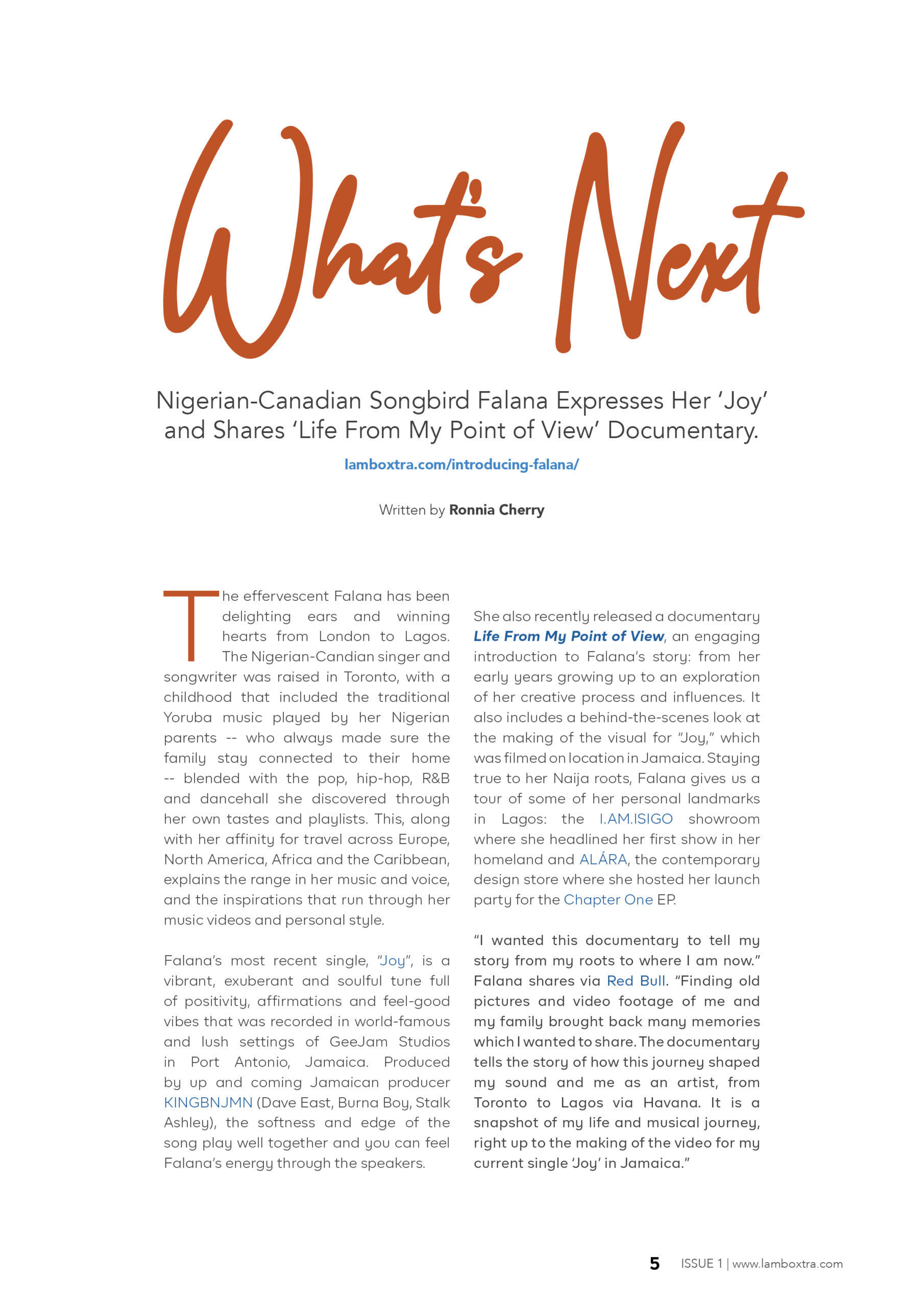 When talking about her recently released documentary, Falana had this to say;

I wanted this documentary to tell my story from my roots to where I am now. Finding old pictures and video footage of me and my family brought back many memories which I wanted to share. The documentary tells the story of how this journey shaped my sound and me as an artist, from Toronto to Lagos via Havana. It is a snapshot of my life and musical journey, right up to the making of the video for my current single ‘Joy’ in Jamaica.

Everything about you is just vibes. Where does that creativity come from?

I honestly just try to keep myself humble and open to ideas! I think creativity is really about trying to be authentic to yourself and writing from a place of non-judgement.

How have Canada and Nigeria influenced your sound, look and overall career?

From when I was born, I have been from two places; Deeply connected and influenced by those places. So there is always this yearning and searching I think that has pushed me to constantly explore and that is what has really impacted my creative journey.

As an artist, I am always looking outside myself and outside what feels familiar.
Sonically, I grew up listening to very specific kind of music that helped my parents stay connected to home, but I was also listening to such a mash up of other sounds. So when I was exploring my own sound, it never felt straight forward.

What was it like filming the visuals for ‘Joy’ Jamaica?

2020 was a year where it was really hard to plan anything and know for sure if it was going to go according to plan. When we were recording and shooting the music video for “Joy” in Jamaica, there were so many new travel protocols and restrictions that were so difficult to navigate. I am so grateful that the final video was amazing despite all of the obstacles.

I think it was also difficult in some moments staying motivated and creative. And I really miss being in a studio physically when I am collaborating with other producers, writers and artists. Sometimes there is a “magic” that happens when you are in the room. But I also learned to create music remotely. I released a song at the end of last year in support of the End SARS protests in Nigeria.

I recorded keys and vocals in Lagos, strings were recorded in Spain and the bass & drums in London. It was a great collaborative experience and everybody bought their own energy into the song.

The issue also features articles that talks about the career success of DJ Cuppy, commemorates the decade long industry reign of Davido, a personal interview with 19-year-old Chicago singer-songwriter, Mamii and so much more.

Find the complete interview on LamboXtra.com