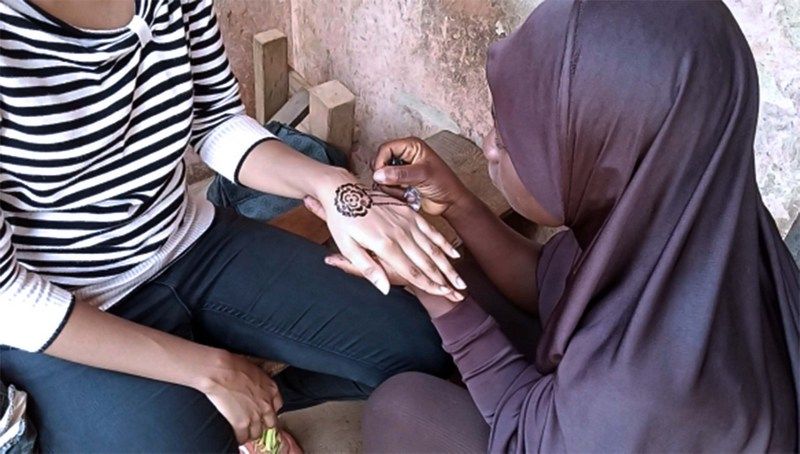 She’s never had formal lessons, she doesn’t even have the traditional tools but she has a business, receives bookings via mobile phone and believes a steady hand trumps all. This is how Nigerian henna artist Wasilat Eniola Remilekun, aged all of 17, runs her hustle.

Wasilat Eniola Remilekun is much sought-after in her community. The reason? Her quick response to call-outs and her steady hand.

“My first professional job, where money exchanged hands, was because of a referral from one of my neighbours. A woman she met at a market saw the henna art on her hands and asked where she got it done. That’s when I got into the business. My starting capital was N150 (37 US cents), and I used the money to buy the black henna dye.” 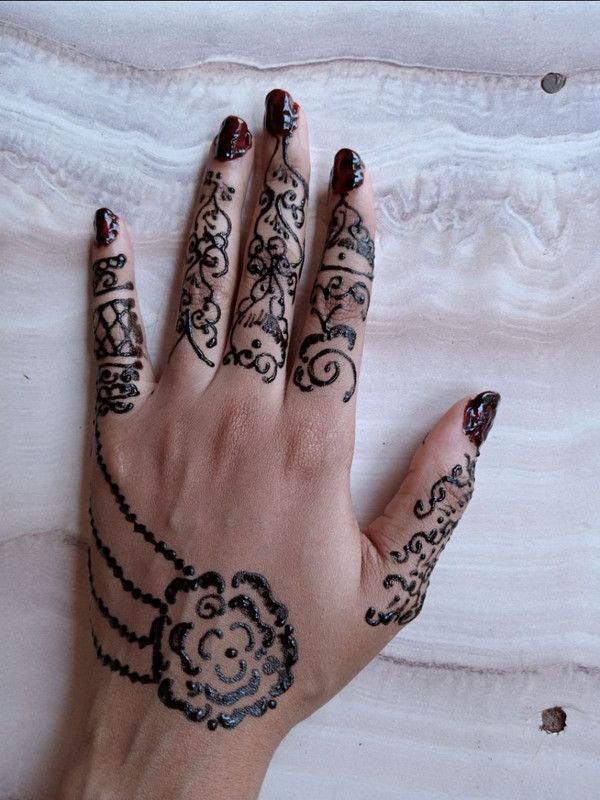 Spoken like a true entrepreneur. But the Nigerian henna artist Wasilat Eniola Remilekun is still a secondary school student. She “stumbled” into the business at 11 and is determined that it will remain a side hustle all the way through university. Right now, however, her services are very much in demand.

Henna, or lalle as it is widely known in Nigeria, has become wildly popular across Africa. Originally a cultural activity restricted to parts of Africa with strong Asian or Middle Eastern ties, henna art has for hundreds of years been a key part of wedding rites, with the bride often bedecked in intricate patterns drawn on her skin with the red-brown, or black, dye.

That was until Bollywood went global, “henna art” became a feature on Instagram and Rihanna had a henna-influenced pattern tattooed on her hand. And before Nigerian artists, Tiwa Savage and Chidinma began championing the art in their popular music videos. With this wave of populist culture behind it, henna art has gone universal and demand for skilled artisans across parts of Africa has skyrocketed, particularly in countries with dynamic youth cultures that had strong henna traditions to start with. 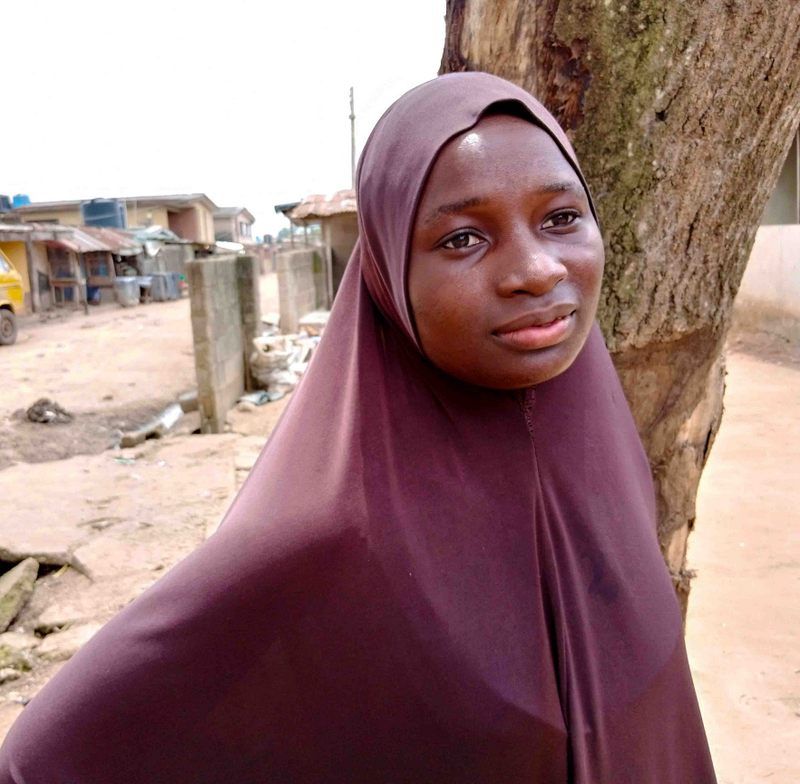 Nigeria is one such country and Remilekun is a beneficiary of henna’s fast-growing popularity in that country.

Initially exposed to the art by the wife of a religious leader in her community when she was just 11, Remilekun began offering a henna “service” when she was in her early teens. Thanks to referrals she quickly became known in her neighbourhood as the “lalle girl.” Her business capital grew from spending N150 ($0.37) to N7,000 ($17) monthly. She has branched out so that her business now includes reselling henna dye.

“I used to go to Agege to buy the black henna, but now someone delivers it to me from Ibadan. Although I have to go farther than Agege to pick up the delivery – I go to IjuIshaga. But, the fact that the person who sends it to me in Lagos from Ibadan gets it from India is worth it. And I make more profit by reselling those colourful henna in my area. I’m the only one who has them here.” 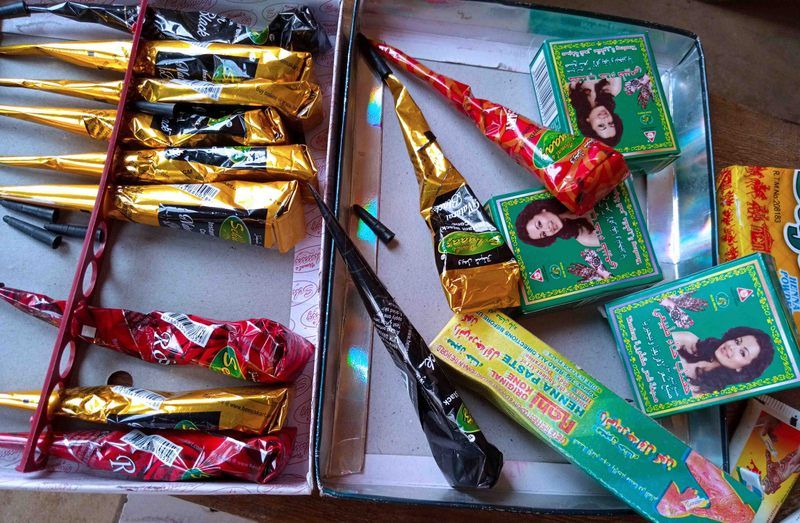 Traditional henna styles vary remarkably. Remilekun explained that Tiwa Savage and Chindinma both opted for a traditional red-brown henna dye that fades after about three weeks, creating opportunities for regular experimentation with different styles. The red-brown dye is known in Nigeria as Henna while the very popular black dye is known as Lalle.

Asked why she refers to red-brown henna as lalle, Remilekun explained that it’s a common name used locally, originating from the Northern part of Nigeria.

“Henna is the name of the plant used to create the dye we use for lalle drawings. Lalle refers to the fine lines drawn on the hands and feet for beautification,” Wasilat explained.

“Some people call it mehndi as well, especially the Saudi Arabians and Indians. In Nigeria, we call it lalle. But, if you go around calling it henna, everyone in the world would understand what you’re referring to, no matter what they named it,” she explained further.

“Also, mehndi is the black henna while henna is the red.” 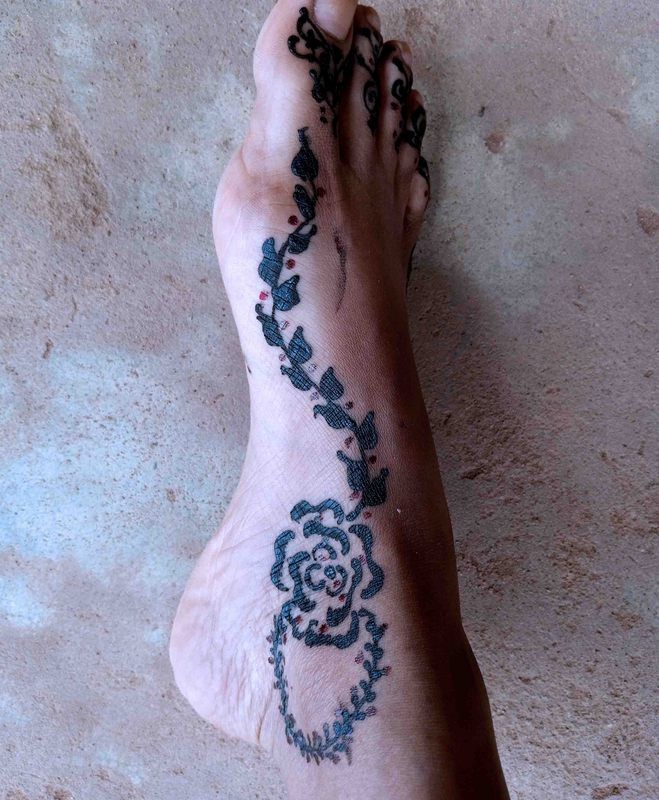 An ethnic Yoruba from western Nigerian, many of her mostly Hausa clients express surprise that she has such skill for someone who is not from a community that uses henna widely, Remilekun said.

She expressed exasperation that there should be prejudice associated with the fact that she does henna art very well, “for a Yoruba girl.”

“This is because the Hausa tribe are known for their skills in lalle (so) some people don’t believe anyone from another tribe in Nigeria can create lalle designs just as well… I’ve seen Hausa lalle artists that are way better than I am but I’ve had people tell me they prefer my designs because it is tiny, whereas the Hausa designs are too big,” she explained 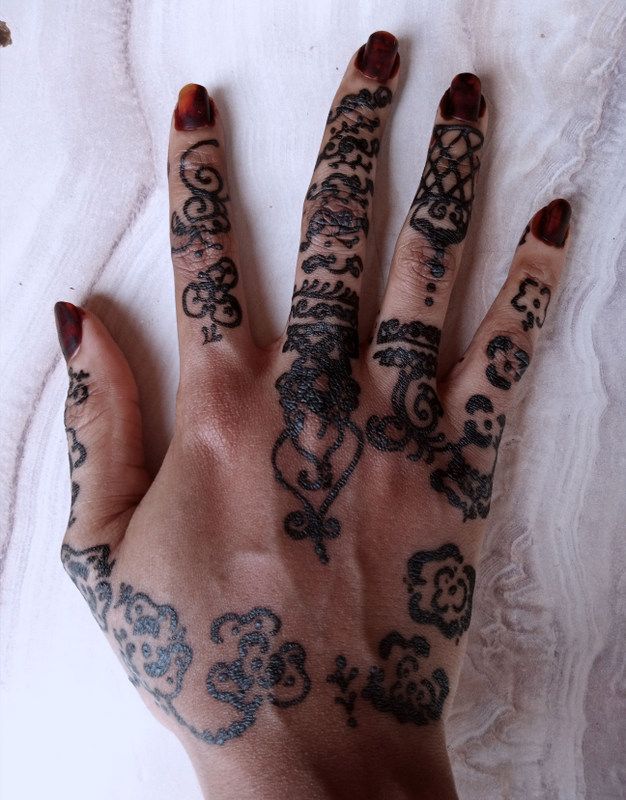 The steady hands and patience that trump any tools

Unlike many of the professional henna salons found in Nigeria, Remilekun doesn’t limit herself to making “bridal” henna patterns.
Her target market is young women who want designs for a photo shoot, a birthday celebration, or the celebrations of Eid-el-Kibr or Eid-al-Fitr. She also does henna designs for special occasions, like a mother’s celebration of a newborn.

Whatever the occasion, however, Remilekun favours customers who give her free rein when it comes to design. Especially those who offer her a large canvas to work on. The “large canvas” might be a back or a forearm.

“It allows me to explore… and draw patterns I’ve had in my mind’s eye for so long. I also like the fact that such customers are bold and are more likely to showcase my work,” she explained.

She also dispenses with the traditional tools that many in the trade still use. She prefers modern materials and freestyling. “Lalle is about having steady hands and patience. That trumps any tools,” she said. 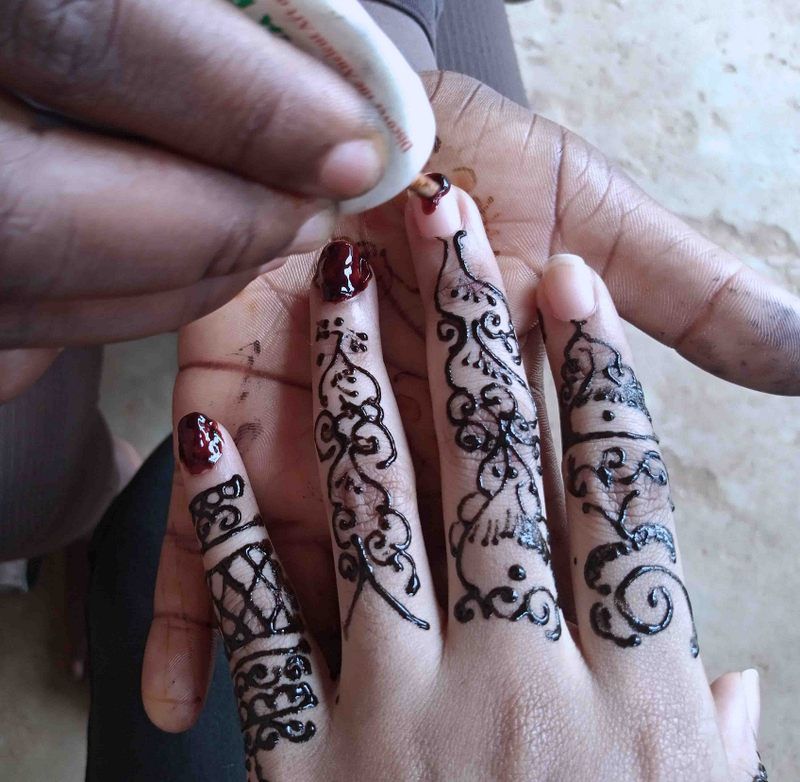 A science student with an entrepreneurial mind

As a science student, henna art is where Remilekun’s interest in art stops, she said. Her biggest love is formulas, and that is why she aims to study mathematics at university, intending to become a teacher afterwards. She’s currently in her final year of senior secondary school and expects to continue her “side career” when she gets to university.

However, she was adamant that she would stop immediately should it prove difficult to juggle the work with her university studies. Meanwhile, having stuck with her hustle past the “five-year hurdle” graduates her as a successful entrepreneur.

Over the years, Remilekun’s customer base gradually increased. Where six years ago, she would barely get a paying customer a week, she now gets around five customers a day, not counting those who come to buy henna dye from her.

“I bought my first phone last year. It’s a big phone. I made a lot of money during the Eid celebrations last year, so I bought a big phone to celebrate. I bought the phone because of my business. I want rich people to know I’m doing this business and come to me,” she said. 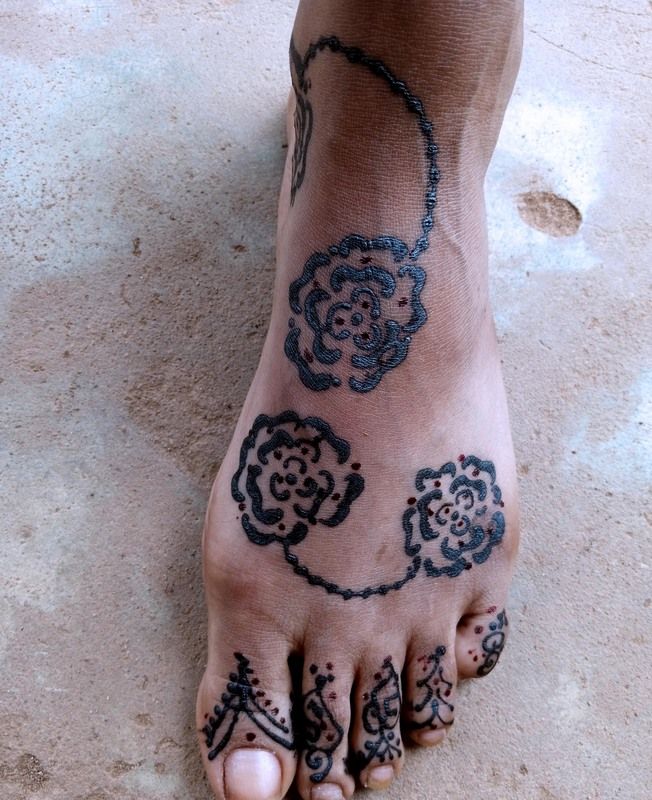 Before then, she had never had a phone, so getting a smartphone was a huge step for her growing business.

“People call me now to come to their homes to do lalle for them. They pay for my transportation and my services separately. I like doing home service because I make more money.”

Despite her “big phone” Remilekun is still not on social media and remains blissfully unaware of the work of other henna artists – or her potential to get more pay for her work. In 2020, 5 years after she started to get “serious” about her business, she finally got a brand for herself.

Her entrepreneurial spirit has her grandmother, with whom she lives most of the time, beaming with pride. 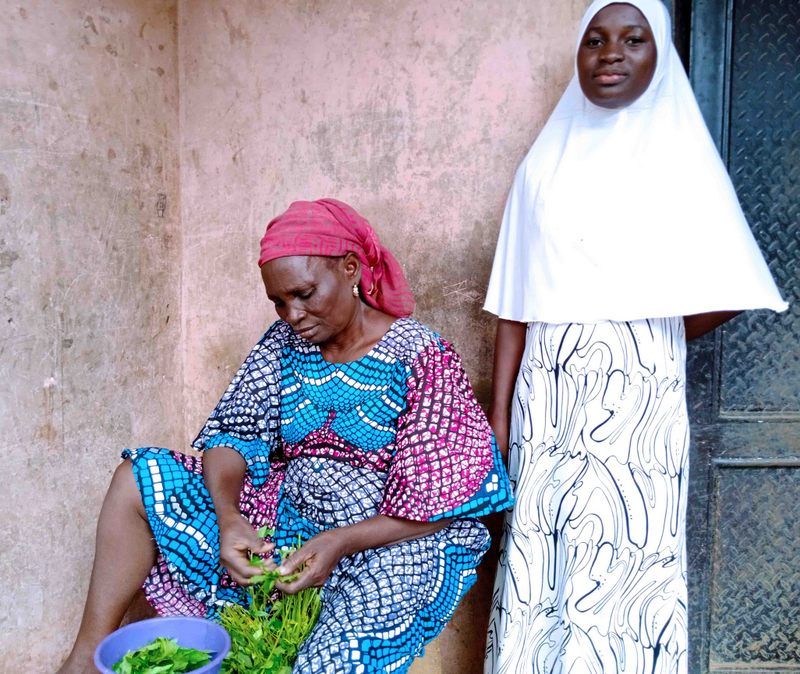 “Wasilat couldn’t go visit her father until after the Eid holiday in 2020 because she was so busy. People kept coming to our house wanting Wasilat to do lalle on their hands, feet, neck, back, everywhere! And they were paying well too,” said Shola Anifowose, Wasilat’s grandmother.

“I’m proud of her. I’m glad that she can use this skill to sustain herself in the future. I’m also happy that she can balance this job and her school well,” she said.

Remilekun doesn’t know if she’ll continue doing henna art for the rest of her life, leaving that to the “will of Allah” but she’s glad about where she is at, now.

]She also wishes that she could get to teach other girls how to “do lalle”, “But they are just not interested. They like it, but they don’t want to learn to do it. I guess I’m just different.” Just like most entrepreneurs.