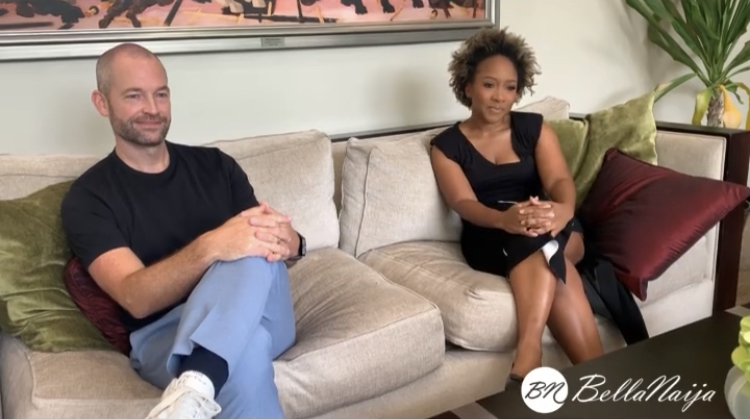 But there’s more to their visit to Nigeria. In this interview with BellaNaija’s Damilola Olatunji, James and Ukonwa shared some details about Amazon’s partnership with AFRIFF and the Nigerian movie industry.

Should we expect a Nollywood x Amazon collaboration? Read excerpts from the interview below:

Apart from delivering the Keynote Speech at Afriff, why are you in Nigeria?

That’s what we believe makes us special. We have over 200 million members in 240 countries and a lot of them know about Nollywood, that’s how it got big. But a lot of them still don’t.

From a marketing perspective, I’m personally very passionate about taking that and getting it to as many people as possible so they’ll understand why it’s so addictive and why you have to watch more and more. If we do that, we think it will not only be great for our members but it will be incredible for the Nigerian economy as well.

How does it feel to be back in Nigeria?

Ukonwa: To be honest, it’s so emotional. It’s such a full circle moment. Growing up here, I went to QC (Queen’s College), I graduated here, left after QC to go to university abroad, and really was chasing a dream that I saw in movies that came out of Hollywood.

It’s interesting to no be in LA, working out of Hollywood but actually now coming back to do the same thing in Nigeria but like taking Nigeria to the world. So, it literally feels like a full-circle moment which for me is just very emotional. It feels really good.

Is this your first time in Nigeria? If yes, what has been the most fascinating thing about Nigeria for you?

I’m always excited when I meet the creatives in a country for the first time and some folks around the world are not that ambitious. The don’t have big ideas. When I ask “What’s your dream project?” they just repeat what’s already on TV, in theaters, and I say “come on, let’s go bigger.”

The creators have been the same way. They’ve been very open with asking questions like “how are you going to do the VFX if you want to do a big action movie?” and we say “oh great we can help with that.” I love that ambition. Ambition mixed with humbleness. That’s how we see ourselves as well.

Is there a special kind of content you’re looking at commissioning from Nollywood filmmakers? If yes, what is it?

James: I would give you two things. The first would be that we know the Nollywood content people love around the world, so we’re going to have to make romance, comedy, drama and the stuff that people don’t love. We’ve got to start from there. But like I was just saying, I want people to stretch themselves, to go a little bigger.

I want to hear those ideas so we can push them. I do think people will just look around to see who’s going to watch that, but I also think a lot of people are going to want to watch that stuff.

Nollywood is one of the biggest and wildly known film industries in the world. What unique distribution opportunity does Amazon Prime provide for Nollywood filmmakers?

Ukonwa: That’s what makes us really special. We have over 200 million Prime members around the world and that’s the last public information we shared. It’s even more than that. So we have hundreds of millions of people that we immediately have access to for the content. And it’s not just in one country. It’s in 240 countries around the world.

So that, for us, is a really critical aspect of it. You don’t necessarily have this middle man between yourself and the customers. We partner with you, we get the content, put it on the service and boom, everybody gets to see it around the world, around the same time.

We just think that’s really special and that’s really powerful. Especially for the creativity that comes out of Nigeria. We love the opportunity to give that access to the great stories coming out of the country to all the hundreds of millions of people that are around the world and growing.

Are we getting a Nollywood x Amazon Prime original soon?

James: That’s sealed off apparently. We’re definitely a quality service. So we’re here in AFRIFF and the team will be looking at films, to acquire stuff and get it on the service. But as far as those big ideas, like my dream projects, (one of those horrors, actions) those take time. You’ve got to hear the idea. This week, my team will be back soon.

It’s been a couple of weeks and already they’re coming back, to keep hearing more and more ideas. And then you find those ideas, then you got to write them, cast them, shoot them, edit them, localize them; all these languages around the world, and then they premiere. That takes time, so I hope people will be patient with us as we work through that.

But all we promise is, it’ll be worth it. When the stuff comes out, you’re not going to turn it on and be like “this is the same stuff… why did I wait for this?” It’ll be awesome. I think people appreciate awesome.

“And James and his team have a track record of doing just that. So I’m actually looking forward to it just as a customer myself,” Ukonwa chips in. She rounds off with some words for aspiring young  Nigerian women:

I feel like just being a Nigerian woman is a superpower that you can basically expose to the world. I would say go for it. Whatever your dream is, whatever your ambition is, I think that Nigeria gives you everything that you need to succeed. If it’s your education or if it’s your confidence. And it gives you the grits too.