Frank Edoho talks Hosting "Who Wants to Be a Millionaire?" on TheWill Downtown Magazine 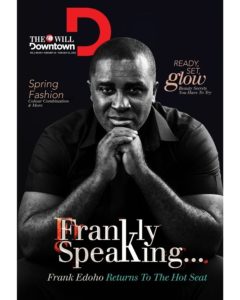 TV host of the popular Nigerian game show, “Who Wants to Be a Millionaire?“, Frank Edoho is the cover of TheWill Downtown magazine’s latest issue.

“Who Wants to Be a Millionaire?” debuted in 2004 with him as host, and the game show ran for 13 years until it was discontinued on September 2, 2017. In this issue, Frank Edoho recounted his experience as the program’s youngest presenter and his plans now that the show has returned to an entirely new era.

Here’s what the Editor, Onah Nwachukwu had to say about the interview with Frank;

When I got wind of the return of Who Wants To Be A Millionaire, a couple of thoughts came flooding through my mind: Who will host this time? it’s been so long. How are they going to get their fans back? Will the new generation be interested in such a show?’

And so naturally, during the interview, those were some of the questions I raised. It’s interesting to note that they have it all figured out, and with the return of Frank Edoho as host of the game show, we are certainly in for some nail-biting moments of suspense, coupled with witty closing lines.

You might wonder what Edoho has been up to since leaving the franchise game show; I’ll leave you with this excerpt from his interview: “I prefer being behind the camera than in front of it…” Read all about his return, what he’s been up to in the last five years, and why he left the previous franchise owners of the show.