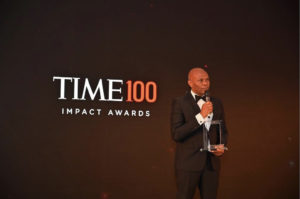 Award-winning economist and philanthropist, Tony Elumelu has received the TIME100 Impact Award for promoting business leadership and entrepreneurship across Africa.

The award recognizes global leaders who have gone above and beyond to move their industries—and the world—forward.

Here’s what the American news magazine wrote on Tony Elumelu:

Tony Elumelu had a vision: that private enterprise—not foreign aid or government borrowing—should be the primary generator of economic development in Africa. What became known as “Africapitalism” has since ushered in a boom in entrepreneurship and regional connectivity across the continent. Elumelu knew it would work because he had seen it work.

Born in the central Nigerian city of Jos, Elumelu, 58, studied economics in college before entering banking—first helping to turn around the distressed Standard Trust Bank before rising to lead the United Bank of Africa in its expansion across in 20 African countries as well as France, the U.S., and the U.K. Nicknamed “Lion King” and known for his signature red ties, Elumelu saw how empowering local businesses could unleash boundless potential.

Following his retirement in 2010, Elumelu launched a family-owned investment company called Heirs Holdings, and the philanthropic Tony Elumelu Foundation, which focuses on promoting business leadership and entrepreneurship across Africa. To date, over 15,000 young entrepreneurs from all 54 African countries have each received $5,000 non-refundable seed capital out of an initial commitment of $100 million made in 2015. “We want to see the businesses of our young ones … rise and overtake what we’ve already built,” Elumelu told a group of fellow business leaders last November.

Comet Nwosu: Learning to Enjoy Your Here and Now