This NYSC Member Captured Stunning Portraits of an Elderly Drummer & Sold Them as NFT - See His Reaction! 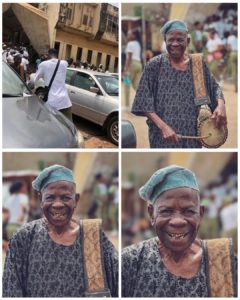 Adisa Olashile, an NYSC member, touched many people’s hearts when he shared the story of how he captured portraits of an elderly drummer named Baba Onilu and gave him half of the money he made after selling them as NFT.

It turns out Adisa saw the man with his musical instrument at the local government secretariat where the youth corps meets for their weekly CDS (Community Development Services). One day, he decided to make the man’s day by taking a picture of him.

I always meet this man at the secretariat where we have our Cds , so I decided to make him smile more with my camera. I hope you all see the emotions in his smiles .

Adisa said in a later tweet on his page that he sold Baba Onilu photos as NFTs and handed him half of the proceeds. In the video he uploaded, 5 wraps of 1000 notes, which are normally worth 100k each, were seen as he handed them over to Baba Onilu, and he penned a caption that reads:

Remember Baba onilu? This is the video of how I gave him is 50% of the money made from his picture that minted as nft on @opensea. NOTE: I’m not rich, I just felt baba needs the money more, nft is here to stay and I will be fine later.

The story gets better with each slide.