Where my girls at?

Lately I have been thinking about the power of girlfriends. Every now and again I meet a woman who says I don’t really get on with other women. Now I can’t speak for all of such women but those I have met in my experience may have been hurt before and are so guarded and suspicious with other women as a result.

One particular lady talked about how women don’t seem to like her. She put it all down to jealousy. However while she was with me, she kept making these snide and seemingly innocuous but very degrading comments and I could immediately see that the issue was not so much that people didn’t like her, it was more so that she really didn’t like herself. When she related to men, she simply resorted to sex kitten style and the interaction was always somewhat flirtatious even when she planned on keeping the relationship platonic.
This particular woman right now floats through life on the arm of her man du jour and I think she is missing out on the most important aspect of it.

When you hear the word relationship, you always think man and woman. However I am talking about friendships.

By nature, I am a loner. Actually, I don’t think I was born that way, I think I became that way as a defense mechanism. I learnt early on that people in general and girls specifically can and will hurt you. I used to take it so personally. Every little thing and I would be offended. I went to a girl’s boarding school, a hotbed for drama. There was always one confrontation or the other. I remember one school year; I think it was my third, where it seemed like every weekend someone was confronting me about something or the other. “I heard you said this, I heard you did that”. Now I clearly had to take ownership for some of the issues, I did the typical things I gossiped, I made judgments, sometimes went out of my way to make fun of the weaker girls, sometimes just to fit in with the wrong crowd. Also I had my fair share of wrong done to me, baseless rumors started, being accused of things I didn’t do, etcetera, etcetera, etcetera!

Life goes on and as it does. We learn. Thank God for growth.

When I first got out of boarding school, I was extremely guarded. I didn’t gravitate to men, because I didn’t desire a relationship as of then. So I kept to myself. I never let people in and I didn’t really give of myself.

I remember my first Nigerian roommate in college. She is like my sister now. We fought so much then, even though we were alone in a foreign space. I mean we had our shares of up and downs and I don’t even remember much of what and how we argued about things but I do remember that she was an “I love you” sort of person and a hugger. Neither of which I was. I could never respond. I was cold. Still am, to a certain degree (But God has changed me so much and I’m still changing) I was so determined not to be hurt that I nearly missed out on a great relationship…almost twenty years later and we still are close.

There was a time when I had been going through some stuff and at first I couldn’t share my problems with anyone. I was so burdened that it impacted my work, my physical self, I couldn’t even lift up my head. I was praying, I was fasting but I was still down. One day, I felt in my spirit that I should share my problems with a woman who I knew but at that point our relationship was still somewhat superficial. I was afraid. What if she takes my problems and uses them for gossip? What if she hurts me? The word in me was insistent. Share the load.
You know they say your husband should be your best friend, sure, perhaps, but the truth is men are wired differently so as you are there venting, the response you get may not be quite what you need. They want to fix and you just want to be heard, at that moment I knew I needed a sister!

I called this woman and shared with her. She was such a blessing to me and since then I feel lighter. She 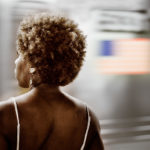 helped me lay my burdens down.
In my country, it is not uncommon to see women carrying loads on their heads. Every now and then you will see a woman who wants to take her load down from her head onto the ground. Sometimes the load is light enough that she can maneuver it herself, sometimes it is so heavy that she struggles, then you will see another woman help her carry it off her head on to the ground. That is what the woman did for me. She helped me lay it at Jesus feet.

Another time, I was so stressed, (in this life, stresses will come) I couldn’t speak. Again another woman who I knew casually…like I said, I didn’t really let people in….she asked me what was wrong. I couldn’t speak but tears started to flow, and God bless my friend, she didn’t probe further, she just started to pray. I couldn’t pray for myself but she did it for me and I could feel her love and I was and am grateful for it.

One of my favorite scenes is from the movie Beloved. The main character Sethe was being oppressed by the spirit of her daughter who she had killed (you have to read the book, to really get the gist) anyway, she was oppressed to the point that she couldn’t fight for herself. Now the women in the town had heard what was happening and they decided that enough was enough and that they were going to fight for their fellow woman. So they gathered at her home and began to sing songs and stand in solidarity. Now a few things happened but the point is that it was the collective power of the women gathered that forced Beloved, the oppressive spirit to leave Sethe.

I wept at this scene, because it symbolizes a truth I know deep within. There is power when women gather. We are the soul of the home, the pillars of the community. If you see a community with strong morals then know it is the women who propagate it. We are more powerful than we understand and our strength is magnified when we love each other. When we recognize that we are all flawed yet we are all beautiful.
A friend of mine and I were discussing how women have been trained to compete against each other, we are constantly comparing and setting ourselves up against the other. Wives compare whose relationship is better with their husband, instead of being a source of strength to each other, recognizing that trying times come to every marriage. Nigerian and Lifetime movies are fraught with the images of women trying to steal a man from another woman, at whatever cost…I could go on and on. Suffice to say, there is power in love. There is power in girlfriends. We are meant to have relationships.

Today, take the time to nurture a friendship and if you already have good friends, say thank you and give a shout out like me…”Where my girls at?! Holla!!!”

Ekene Onu is a writer living in Atlanta or Abuja depending on when you get her. She is the author of the Nigerian chicklit book called The Mrs Club and she is currently working on an inspirational book due out very soon. She also blogs about life, love and faith at www.lifelovefaith.com.

Related Topics:articlesekene onu
Up Next

Join the Revolution: Light Up Nigeria