15 Questions, 10 Million Naira! Chimuanya 'Aroma' Ufodike slays 'Who Wants To Be A Millionaire' 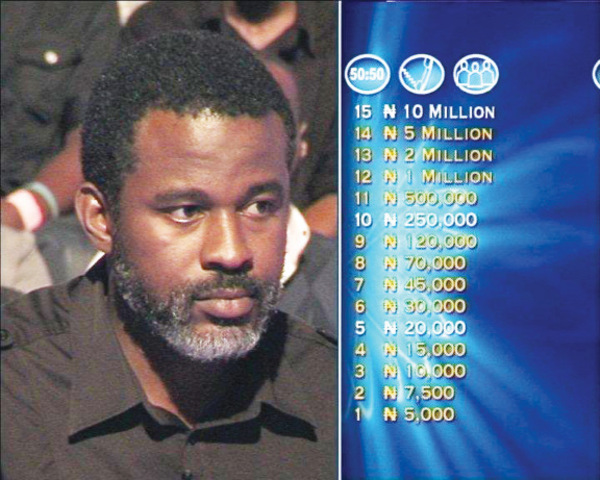 It started off like any other episode of  MTN’s ‘Who Wants To Be A Millionaire Nigeria’, the host Frank Edoho introduced the show – people were seated for the ‘Fastest Finger First’ segment where would-be contestants have to answer a question, whoever answers the quickest gets to the ‘hot seat’ – the actual ‘Who Wants To Be A Millionaire’ contest. This time the question was to order some destinations from East to West – A man called Chimuanya ‘Aroma’ Ufodike was the quickest and so he moved to the millionaire chair. Then the real action began!

Dressed in all black with a prominent salt and pepper beard, this 36 year old bachelor introduced himself as Aroma, he told the host that his name means ‘good year’ and then he jumped right into the game. Question after question, he confidently answered correctly.
He got to the 11th question, one step away from 1 million naira and he revealed that the subject of the question ‘lives on top of him’…That’s right, the person being asked about is his neighbour who lives in the flat above his!

Serendipity at its finest.

It wasn’t until the 14th question worth 5 million naira that he used his first lifeline. He asked the audience; the most popular audience answer was also his choice but he used the 50/50 lifeline to be certain. Another correct answer in the bag. He was now at the final question – the 10 million naira question. No one had ever won the 10 million naira prize. Only one other person has ever even gotten to this stage. Professor Maathai Wangari won the Nobel Prize for which of these? that was the final question. Aroma did not know the answer. He decided to use his last lifeline – phone a friend, he repeated the question several times but the reception was bad (…isnt this show sponsored by a telecoms company?), perhaps it was the nerves but he barely heard what his friend said, he had to ask the host to repeat what his friend said – ‘Peace’. His nerves were shot, he asked for some water to drink. He then decided to go with his friend’s advice. Final answer? Yes, final answer – Peace.

He won! With confetti flying around, like Usain Bolt did after shattering the world record, he jumped up and ceremoniously reenacted Bolt’s signature ‘lightening bolt’ celebration. 36-year old, single, UNN Geography graduate, ex-banker, current entrepreneur – Chimuanya ‘Aroma’ Ufodike just won 10 million naira – this amount of money might not be ‘life changing’ for some in Nigeria today but it is still very special to have made history and won the show. In a country still entrenched in dire circumstances, stories like this offer many hope that maybe one day they just might hold a million naira cheque. In this case, perhaps it was written…that we can ponder, for now, Aroma is off to the Caribbean to enjoy a well-deserved vacation.

Could you have won the big prize? See the questions that got Aroma to the pinnacle! (answers below)
1. Which of these is the name of a British Football Club?
A. Blackburn Losers
B. Blackburn Rovers
C. Blackburn Lovers
D. Blackburn Wanderers

2. An establishment where money can be deposited or withdrawn is called what?
A. Fridge
B. Bank
C. Market
D. Shoe

3. Name given to a boy born on Sunday in Ghana is what?
A. Bassey
B. Kwesi
C. Abiodun
D. Ejima

4. Which of the following refer to the word fire?
A. Inferno
B. Domino
C. Stiletto
D. Tornado

5. According to the constitution a public officer is not allowed to do which of these?
A. Marry a wife
B. Bury a dead parent
C. Have thanksgiving in church
D. Accept gifts or favour in kind

6. The process by which genetic traits are transmitted from parents to offspring is called what?
A. Tenacity
B. Verifiability
C. Hereditary
D. Validation

7. Roland Garros stadium is in which city?
A. Paris
B. Copenhagen
C. New York
D. Madrid

10. Which of these holds bones together at the joints of the body?
A. Nephrons
B. Nerves
C. Ligaments
D. Stitches

12. DAX refers to the stock market of which country?
A. France
B. United States
C. Germany
D. India

14. In which country is the Galeras Volcano?
A. Lebanon
B. Columbia
C. Japan
D. Eritrea

15. Professor Maathai Wangari won the Nobel Prize for which of these?
A. Literature
B. Economics
C. Peace
D. Medicine

On the verge of stardom, Waje releases ‘Kolo’