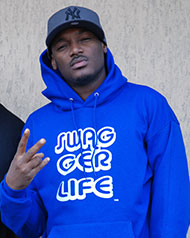 2Face is a star! No matter what has happened, when you see 2Face and the fan reaction he gets wherever he goes, its obvious that the young man from Benue star is indeed a star.
Though his last album ‘ The Unstoppable‘ was not the megahit that many anticipated, the album still made an impact by delivering several hit singles including ‘Enter the Place’. The album also racked up some awards including at the recent MTV Africa Music Awards (MAMAs).

Now 2Face is getting ready for the next step, a new album set to be released in 2010.
Here is a recently leaked song from his forthcoming album, the album is called ‘Implication’.
Catchy song, great to see 2Face infusing his native Idoma language into his music

Related Topics:2facenew music
Up Next

Get in the Xmas Spirit with Mo’Cheddah’s True Christmas: FREE Download