From the 22nd to the 25th of September 2010, the  Harlem International Film Festival took place in New York City, USA. The festival is “is the marriage of History to Art, and Film to one of New York City’s most dynamic communities”. Nigeria was very well represented as Anchor Baby, the movie by Lonzo Nzekwe was honoured with Best Film award while lead actress Omoni Oboli won the Best Actress award.

Shot in Brampton and Hamilton, Ontario Canada, ‘Anchor Baby’ the film that also received positive reviews from critics at screening events. It was chosen by the Reel World Film Festival as one of the 20 emerging film makers in Canada  and now it has bagged two awards from the Harlem International Film Festival in New York City.

A film that had Caucasian, Hispanic, Asian and African characters playing major parts, ‘Anchor Baby’ tells the tale of a married illegal immigrant couple living in the US, Joyce and Paul Unanga. They have been ordered by the US immigration to leave the country by voluntary departure. They agree to leave; but only after Joyce who is 5months pregnant delivers her baby inside the US. This will guarantee automatic citizenship for their child. Ignoring the deportation order, the couple goes into hiding. Paul was later caught and deported while Joyce stayed back to struggle on her own to achieve their dream.

Speaking on why he chose Omoni Oboli for the lead role the producer Lonzo Nweke said ‘That decision is one of the best decisions I made in the earlier stages of production. When I wrote the script, I wanted someone who could transform the script and bring it to life. I hired a professional casting director to audition all the actors I used in the movie. I sat through all the auditions and hand picked every single character in the movie. When I watched a few of Omoni’s movies, I was convinced that she has the ability to transform the script. Plus, I did a brief background check on her and spoke to her extensively on the phone to know more about her, that’s when I decided she was the one’ 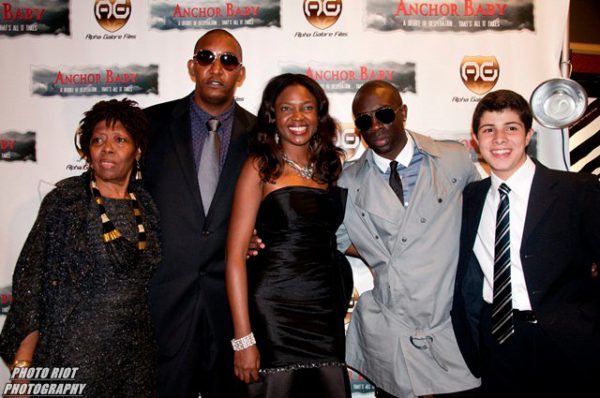