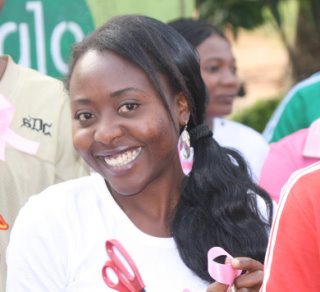 My Name is Samira Gomwalk, I am a Cancer survivor and this is my Story….

It was a morning like any other. I was getting ready for school and a commercial came on the radio asking women to do the ‘breast cancer self examination test’. I had heard of the test but wasn’t exactly sure how to do it the right way, so I subconsciously followed the instructions coming from my radio. I noticed a lump in my right breast but if I am honest I didn’t panic all that much. I was just curious to find out what the lump was. I made an appointment with the doctor just as a precaution. So you can imagine my shock horror when my doctor actually told me I had cancer! I couldn’t help thinking it was all a big joke! I was only 24, I thought to myself, what the heck would happen to me at 65 if I could get cancer this early! This was how my battle with cancer began.

Not only did I have to battle the disease that had the potential to kill me but I also had to battle the negative treatment I received from friends. I lost so much weight during that period it was difficult to explain the situation to anyone. Even when I did go to great lengths to explain, it was obvious that my efforts were useless. For some reason, some of my friends believed I was using breast cancer as a smoke screen to cover up my real ailment- HIV! That was especially hurtful- I had expected most of my friends to be a source of comfort and not malicious gossip. I felt eyes burning into my skin each time I attended lectures. School wasn’t fun for me. It was like a prison I was forced to attend. I had this sad look most of the time and just wanted to leave for home as soon as I arrived.

But thank God for my loving family, their love, support and understanding really did keep me going. I also did have a few trusted friends who supported me with love, prayers and helped me realize that life was still worth living regardless. But despite all the support they showed me it was sometimes difficult for me to see how much pain they were going through because of my ailment. I remember when after one of my visits to the doctor, my mom drove me to pick my little sister from school. That was the day we told her I had cancer. She immediately burst into tears. I felt so sad I didn’t know what to do. All I could do was pray for God to heal me.

Treatment for me began with chemotherapy which was given intravenously- it was awful…the weight loss, hair loss, depression! I hated the feeling of the drip trickling down which made me really sick. I could taste it in my mouth. I missed my once normal life because I was bedridden most of the time. At some point, I started seeing a psychiatrist. I thought I was running mad. Hearing the rumors from school that I was HIV positive really did kill me inside. I lost hope and gave up on life. I remember giving away my clothes because I had mentally given myself a private death sentence. I just kept thinking to myself that there was no way I would get out of my situation alive! I even lost touch with God at one point because I was angry with Him. I felt my sickness was unfair. I remember saying to Him once, Lord I don’t drink or smoke, how could you let this happen to me?’

After all these crazy thoughts finished floating in my head I started to see just how much love and support I was getting from my family. My step father was especially fantastic. I remember him telling me that he would do whatever it took to make sure I got the best treatment ever. I couldn’t let him down. I just couldn’t. I chose to fight for him and for the rest of my family. I became determined to fight and win the cancer battle not only for myself but for my family. Thankfully with God’s help and the love of my family, I was able to develop a positive outlook on life and my future. It gave me the courage to face the disease squarely always praying and thanking God for everything. I even took up playing tennis when ever I wasn’t in bed just so I could focus on other things. I remember back then I had lost my appetite and all I could eat was carrot, so everyone called me the carrot lady of the house. Now that I think back it does seem kind of funny. I am really thankful that God saw me through!

The next phase after chemotherapy was surgery. Initially my doctors suggested a mastectomy but I was fortunate enough to later on have a breast sparing mastectomy because of my age. The operation was done in South Africa. I remember those days in my hospital bed when I was really sick and it seemed like I was never going to leave there alive. One day I looked up to the heavens and I prayed to God that if He spared my life, I’d make sure I serve him and also start an initiative that would help other cancer sufferers. And God answered my prayers, because I recovered so fast and it was amazing. Even my doctors were surprised at how fast I recuperated.

After the surgery was radiotherapy. It wasn’t as painful as the forms of treatment I had already undergone. The only side effect I suffered was tiredness which compared with past treatments wasn’t bad at all.

Recovery: Is there life after cancer?

Yes, there is life after cancer. I am a survivor so I can say that. I received the ‘all clear’ sign from my doctor 9 months after my diagnosis. I was at the Montana hospital in Pretoria, South Africa. After a few x-rays and scans my doctor gave me the good news. I think it is impossible to explain the way I felt when he told me the good news, to say I was ecstatic was an understatement. One of the nurses even had tears in her eyes when she heard the news. She told me I was a lucky girl because she had lost her husband to breast cancer.

Although I’ve never really thought of a re-occurrence, even if the cancer does return, I won’t be deterred. I fought it once and believe I can fight it again. In my opinion one of the keys to beating cancer is possessing a strong and innate desire to live. The only way to do this is to think and live positively taking life one day at a time and at all times remembering that you can’t do it on your own, except you put God first.

This is the same advice I have for all cancer sufferers out there. Put God first in all that you do and He’ll surely see you through. Tough times will come but don’t give up because the devil only strikes back when you let him. Don’t ever let him win! 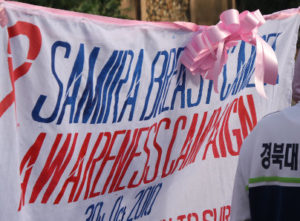 My promise to God

Life is too precious to be moping over spilled milk. Having had cancer has taught me to appreciate who I am and count myself to be one of the few lucky ones to still be alive. I view life from a totally different perspective now.

When I was lying on my hospital bed I made God a promise that if he spared me I would help other cancer sufferers. Today, I’m a strong advocate for breast cancer awareness and I teach people about how early detection can help save lives. A lot of people don’t know that the key to beating cancer lies in early detection, just like with me.

When I first discovered a lump in my breast, I went to the doctor thrice and was told it was nothing and that I shouldn’t worry. I persisted and my persistence paid because eventually they found out my tumor was malignant and was still at its earliest stages. I was lucky. If you feel something’s not right act fast! Your fast action might just save your life!

My battle with the disease initiated the birth of my baby ‘SAMIRA’ a Non Governmental Organisation which aims to create awareness on breast cancer because early detection is the key to surviving this disease. SAMIRA aims to source funds that would go a long way to help those affected by this disease through providing medication and financial assistance where needed. We also hope to have support groups for survivors and those living with the disease. We are already creating awareness with scheduled talks with youth groups around my vicinity and churches around. 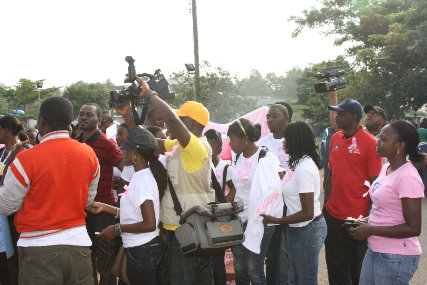 During the Breast Cancer awareness month of October, SAMIRA organized a walk tagged the ‘SAMIRA Breast Cancer Awareness Walk’ in the city of Jos. It was a gathering with young people who came to help support this cause by walking the city of Jos with placards and our voices. It was awesome! This is just the beginning of many great things to happen. We are fighting breast cancer back. SAMIRA is an Arabic name meaning ‘something good’- what better way to give, even though the disease came to steal my joy but today ‘something good’ is coming out of it. I made it. You too can! Spread the word. Thank you Jesus! 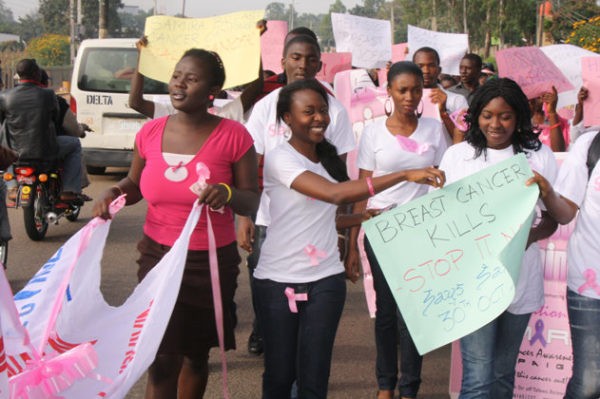