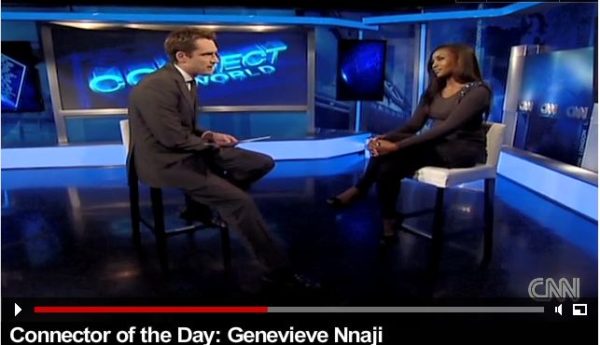 BellaNaija.com gave you the scoop on Genevieve Nnaji‘s interview on the CNN International show – Connect the World. The interview was filmed in October 2010 at the CNN International Studio in London, UK and aired on the 23rd of November 2010. Genevieve was the “Connector of the Day”, so in addition to the questions from CNN anchor, Max Foster. She answered questions from viewers all around the world.

She did well! Gene seemed relaxed and you can tell she enjoyed the interview.

Transcript: CNN Connect the World – Genevieve Nnaji
(14:22:29) MF: tell us about ‘Bursting Out’ for people who don’t the movie and are thinking about going to see it – what is it about?

(14:22:34) GN: Bursting Out is a romantic comedy. It’s a story about a very upp-ity, uptight, elitist woman who falls in love with the wrong guy in the wrong class of life and then her discovery about – and then she falls in love hard so…it’s pretty funny. I found it funny.

(14:23:00) GN: It was fun. It’s always fun. Cast were amazing and they were also funny and everyone had their own little contributions, which made it all was fun. I don’t feel like I work when I’m on set to be honest.

(14:23:25) MF: And you’re here in London because it’s being premiered in London. It’s already had a premiere in Lagos. Why London? Is there a big market here?

(14:23:33) GN: There is a big market here. Everyone is a descendent of Nigeria or Ghana or where ever and movies are really, really big here. Just walking down the streets, the amount of people who stop me on the road, and really appreciate what we’ve done. So…it’s amazing and you know they ask for it. They’ve been asking for it for a very long time. So, yeah. It’s not the first time I’ve been here to premiere.

(14:23:56) MF: It seems that Nigerian film is becoming more and more popular abroad, but who’s watching those films? Is it people of Nigerian descent or is it people who have nothing to do with Nigeria?

(14:24:28) MF: It’s called ‘Nollywood’ which is a term I don’t think all actors like in Nigeria, but it’s sort of been coined. How would you say Nigerian cinema differs from Hollywood cinema?

(14:24:41) GN: Do we really have cinema? [laugh] Cinema is pretty new in Nigeria – I mean it used to be back in the day, but that sort of faded off. But it’s new, it’s coming back and hopefully it comes to stay. But for now all we do are home videos, movies for your tv. But there we’ve had success stories like EJ and a few other movies that have been shot on film and had to be premiered and shown in the cinemas and it’s amazing how people have received this so….

(14:25:13) MF: As you say, the growth is explosive. Why are people so fascinated by film now when film has been around for so long?

(14:25:30) GN: Movies have been there for not long, but say relatively, for about 20 years – pretty recent. But you see we started out making films for the people by the people. We are only allowed to tell our stories and it’s amazing how people can relate to these stories – you know what I mean? And obviously because of the awareness we create in terms of what happens in every individual’s life at some point – we all have story in common and I think that’s really why people have taken an interest in our films to be honest, because they can relate to our stories.

(14:26:10) MF: But they want the fun films don’t they? They want the romantic comedies. It’s not necessarily the really gritty, traumatic movies that sometimes come out of Hollywood.

(14:26:24) MF: We’ve got lots viewer questions of course – from all over the world actually. Robin from Cameroon asks, “What’s your biggest challenge as an actress in Africa?”

(14:26:35) GN: Well, in the beginning it was pretty challenging because first of all you had to – it’s not a culture that Africans have, well back in the day, took to very readily so it was hard having to go through that and at the same time convince people that you know what you’re doing and they should give you a chance to prove yourself. And it’s possible, you know, to do something – to actually be in the public eye, and be an actor and still be normal. You know so it was challenging.

(14:27:18) MF: You’ve made your name obviously in Nigeria and but also abroad. I think it was Oprah who called you the ‘Julia Roberts of Africa’. What do you think about that label? I mean it’s great – this is from Oprah!

(14:27:34) GN: Yes, I am an actress in my own right. I don’t think I have anything in common with Julia Roberts to be honest. But it’s really complementary. It’s for me it’s a honour either way. It’s just recognition – that’s good.

(14:27:51) GN: Angelina Jolie. I’m a hug fan. Love her, love her, love her. Um… Johnny Depp, amazing actor. I think he’s so intriguing. I think there is something so mysterious about him. These two people, I don’t know I think I would definitely get along with.

(14: 28:06) MF: And Stachelle from Trinidad says, “Are there any times that you regret being famous, especially in a country like Nigeria where everyone knows you, and they really do.

(14:28:21) GN: When I want to do that I basically just stay in. I just stay in and hang around with people who know me for me and appreciate me whether or not I’m an actor. You have to just get up and go and just you know grab that privacy that you want so much.

(14: 28:36) MF: When you can get it. Pat from our Facebook page asks, “How do you discover other talented Nigerian actors and what do you do to give back to your country?”

(14:28:47) GN: We have quite a number of young ones back home who are trying to be actors and actresses and they are really working hard. But all you have to do is audition and prove yourself and believe in yourself and hope [MF – UP SOT: hope you break through] you break through at some point and what do I do to give back? I basically look out for talents in the industry. I basically look out for talents and encourage a lot of producers to try out new people and for the society the little I can do to be honest.

(14:29:22) MF: And that’s because – I presume – you feel for these young kids that don’t have families and you can give something that can help.

(14:29:28) GN: Definitely. I’m very passionate about you know, orphans because – for me – there are so many other diseases out there but you see a lot of people don’t even have the experience of what love is about and these kids don’t even have that. So for me, times like Christmas, you know you just want to do something and actually buy them presents and I just think they are too young and too innocent and we need to actually show them that people out there do love them. So I do my bit.

(14:29:55) MF: Assan Cyril wonders where you get your motivation when so much of the country is in poverty, which you’ve just referred to I guess – lots of orphanages aren’t there?

(14:30:04) GN: Yes. Well, country being in poverty. Well then our job is to put a smile on people’s faces. You know, we do the bits we can and we’re pretty generous when we come across people as well. And then we do a lot of talking to people that we feel can help. You know like,..

(14:30:27) MF: Ok, and Catyatoo asks what advice would you give to young Nigerian girls that may want to follow in your footsteps?

(14:30:35) GN: I would tell them to definitely be sure, first of all [MF UP SOT: Would you advise them to go into the industry?]. Yes, of course, it’s a wonderful place to be, especially if you love, what you, if you’re sure you can do it. It’s a wonderful place to be. I would definitely advise them to believe in themselves, be true to themselves and be sure that it’s something they are willing to do and they’re ready for the consequences because every good thing comes with consequences.

(14:31:13) GN: Umm…. Biggest regrets? Oh boy, regrets – I don’t know – I hardly regret anything. I just learn from mistakes. I don’t regret anything. It’s too hard. I mean you do the best you can at that point in time and you know everything is about growth and progress and I’ve gotten older so obviously you learn more. You learn on the job. I love my job – don’t worry about anything at all.

(14:31:36) MF: And finally Joped from our Facebook page asks, “When do you think that African movies will be able to compete with big budget Hollywood films?” Or do think they already are?

(14:31:46) GN: I think a few people have given them a run for their money [laugh]. We have to claim that, but we are getting there. Maybe not the Nollywood you know, but definitely we have a few people out there – a few Nigerian students who have schooled abroad and have gone to film school and are coming back home now to put to practice what they’ve learnt. So we do have a few people who are coming into the country right now and doing big things.

(14:32:11) MF: And the reality is it’s a very expensive business, so you need the finance as well. Is that coming more and more to Lagos now, do you think? You’re getting the funding that you want on your movies?

(14:32:20) GN: We have gotten support every – we do get support every now and then. But not as much as we would love to – not as much as we should. Because the movie industry is like the biggest export right now in Nigeria and we have in some way re-invented the country, you know. And we would appreciate some more encouragement from the banking sector.

(14:32:42) MF: Because people would be surprised by how much a Nollywood film actually costs. How much is it in dollars?