After three successful editions, the editors of Y! Magazine are pleased to announce its elections issue! Themed the RSVP Issue, (Register.Select.Vote.Protect), this historic edition achieves an impressive string of firsts.
In an unprecedented show of acceptance, President Goodluck Jonathan sits down to a live interview with Y! – a two-hour exclusive with the Editor, Chude Jideonwo and Aziza Uko.

Mr. Jonathan – the one candidate with everything to lose as the incumbent and the only democratic president not elected into office – takes on hard questions about the youth debate, the power sector, the Benin-Ore road, Wikileaks, the EFCC, the PDP, with exclusive pictures from Ty Bello and Obi Somto.

Excerpts from the interview:
Power – you took it as a priority when you came into office – but, as with successive governments, one year down the line in terms of practical change in everyday lives, not much seems to have changed. Why not?
I cannot agree with you that not much have changed. Before Nigeria started investing in the IPPs our production was just about 1000MW now we have attained 4000 MW even though by the investments we have made we should have attained 10,000MW if not for the constitutional challenges that we faced in investing money from all ties of government into the IPPs. But we are back on track and will make quick progress.

Also, we have seen the usual band of millionaires who seem to support every government of the day making headlines as supporters of your campaign. Many believe that these people are not inspired by your message, rather their own selfish interest to remain in favour of your government. Can you assure us of independence from these money-bags if elected?
I run an independent government and at all times our decision-making process has placed national interest over special interests. This is how we have managed to solve problems like perennial fuel scarcity.

Many Nigerians have also come out to strongly identify the PDP’s big umbrella with its many narrow interests, as the problem with the country. Some like Prof Wole Soyinka, have said the PDP is wired against Nigeria’s good, what would you say to that?
Nigeria is a country with many challenges and I can appreciate our collective impatience to make progress. The problems we have cannot be belittled to the point of seeing them as problems of PDP or problems caused by the PDP. The problems we have are problems that the PDP is not solving fast enough. I concede.

More of these hard questions on the lips of every Nigerians and frank answers are in the latest issue of Y!

“We are proud of this achievement because it is the first time that a serving President of the Federal Republic of Nigeria would grant a lifestyle magazine an interview,” said Ms. Uko, who assumed the position of Y!’s Editor-at-Large in March. “And it is the first time that Mr. President would grant a face-to-face sit-down with any media outfit this campaign season. We are obviously very proud of this scoop – hence our special double-cover issue.”
It’s a double cover – and the second cover has M.I, Banky W, Omoni Oboli, Sound Sultan, Ruggedman and Ice Prince share their thoughts on these elections and the future, plus an exclusive RSVP shoot with Obi Somto.

Y! also chronicles the historic youth participation and organization in these elections. Nmachi Jidenma reports on how young people are organising in “Working for Change”, James Sambo scores on youth volunteering for various campaigns in “Team Spirit”, Ebuka Obi-Uchendu shares his experience hosting Nigeria’s first ever youth-focused presidential debate, Ifreke Inyang takes a crucial look at the impact of Twitter and Facebook in these elections in “Online vs Offline”, there’s an interview with Nigeria’s youngest campaign manager Ohimai Amazie, Cheta Nwanze writes Don’t forget the Governors and for those “Spoilt for Choice”, four supporters tell what’s special about their Muhammadu Buhari, Nuhu Ribadu, Goodluck Jonathan and Ibrahim Shekarau. 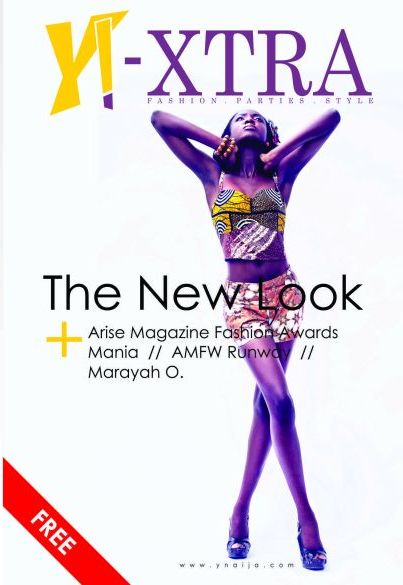 In a style shoot, Y! captures the young (and the old) in everyday situations who say one thing – it’s cool to vote! And, in addition to this bumper package, Y! debuts Y! XTRA – a pictures, parties, fashion, and style pullout that comes free!
“Call it recommended reading for the 2011 elections – and after!” said its Managing Editor, Adebola Williams. “We call this a collector’s item – and we know for certain that this historic RSVP edition is guaranteed to blow you away.”

The magazine is available from Tuesday, April 12 2011 nationwide.  For more information and a list of stores and vendors are available on www.ynaija.com.

The Making Of “The Future: Watch This & Discover the Story Behind Ty Bello’s Inspiring Song