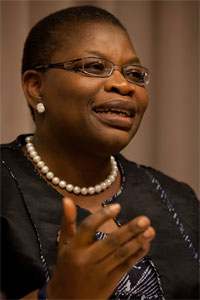 A new date has been announced for The Nigeria Symposium for Young and Emerging Leaders. It will take place on Monday 19 March 2012.

The programme was moved from January following the protests called by organized labour and civil society. Chude Jideonwo, executive director for The Future Project and lead presenter of the Symposium said the weeks that followed was the most instructive and perhaps the upside to the protests and the chain of events that followed presented a real-time case study for the issues that this new generation of leaders will gather to discuss.

The theme for the Symposium has also been updated to “The Challenge of Responsible Governance: How Can This Generation Do Better?” The structure of the discussions has also been changed into three broad sections that will reflect the recent leadership challenges highlighted recently.

Obiageli Ezekwesili, headline speaker said she was excited the symposium was back on track and that all of our speakers have confirmed to join the conversation at this new date. “The necessity for such conversation has become even more accentuated for this Turning Point Generation of emerging leaders,” she said.

According to the Central Working Committee, flowing from The Future Awards, this is the next stage of its involvement in building a new generation of leaders: creating a critical mass of new leaders who are already blazing a trail and controlling systems – including business and political leaders, media leaders, thought leaders, civil society and public service leaders.

Joining Keynote Speaker and Headliner, Obiageli Ezekwesili  who is also the World Bank Vice-President for Africa is Bishop of the Sokoto Diocese and member of the defunct Oputa Panel, Bishop Matthew Kukah.

The discussions will be driven by young leaders across the nation and Lead-In speakers will include Governor Rotimi Amaechi of Rivers State, Governor Kayode Fayemi of Ekiti State, Oronto Douglas (Senior Special Assistant to the President on Research, Documentation & Strategy), Mallam Bolaji Abdullahi (Honourable Minister of Youth Development), Mallam Nasir el-Rufai (Former Minister of the FCT), amongst others.

The event is presented by The Future Project in association with EnoughisEnough Nigeria. Partners include the World Bank, the International Republican Institute, the Federal Ministry of Youth Development, Paradigm Initiative Nigeria, the Nigeria Leadership Initiative and LEAP Africa.

The event will be held at the Shell Hall of the Muson Centre in Lagos, and will be hosted by Tolu Ogunlesi, winner for CNN African Journalist of the Year 2009; and Adaure Achumba, a correspondent for eNews Africa.