Ofilispeaks: The Right To Sh*t With Dignity 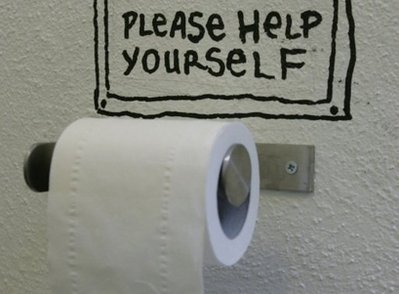 I recently downloaded the Nigeria constitution on my blackberry thanks to this nifty link. But imagine my disappointment when I read the constitution and found out that there was not an explicit section that dealt with a Nigerian’s right to shit with dignity. I know some people might think this is trivial or irrelevant, but trust me it is very important!

Several months ago I was at the Muritala International airport. I had just finished checking in when I felt a sudden rumbling in my stomach. This normally occurred when I was about to give a speech or when the elastic capacity in my stomach walls had stretched beyond its critical point. Unfortunately it was the latter…I needed to find a toilet and fast. I computed in my head that I had about 20 to 25 minutes before my stomach would be forced to deploy its contents. This was enough time for me to run through customs, security clearance and customs again (if you have been to MMA you know what I mean). Unfortunately my perfectly computed time (plus with buffer) did not agree with my stomach, somehow I had failed to factor in the fact that pounded yam mixed with Egusi and Goat Meat created a much greater stretching effect on the stomach than other foods.

By the time I got through customs, the only thing  circulating in my head were the words “must find toilet now.” It was as if the local food lodged in my stomach was doing all it could do to stay in Nigeria. Fortunately after dodging the second barrier of customs agents, I was able to find a clean and vacant stall. I was relieved, cause it could have turned out ugly.

After ridding my body of the Nigerian food impregnating it…I turned casually to clean myself up. And that was when I realized my biggest mistake. I had not checked for toiletries, there was no tissue paper in my stall. I looked over at the opposite stall and all over the toilet but there was no tissue paper to be found (apparently they had been kidnapped). I was in a quagmire of shit, mentally and physically. What would I do? I took one look at my white t-shirt and proceeded to{edited due to graphical content}

This is not the first time something like this has happened to me or other Nigerians. On our long drives to the village we often have to make a dash to the bushes just to take care of business. No matter how rich you are…unless you own and RV or helicopter you are not exonerated from this.  I have heard stories of chiefs, business men, engineers that have gone through the bush experiment. Unlike our cohorts in some countries our federal roads are not littered with filling stations but rather bushes upon bushes upon bushes. In Texas were I studied for example, you can barely go 10 miles on a Federal Road without seeing a filling station equipped with a fully stocked Toilet.

So after hearing about the degrading experiences of so many other Nigerians and reflecting on my nightmare in Muritala Mohammed Airport I decided to do something. Thus, I began drafting an amendment proposal to chapter IV section 34  of the National constitution, which deals with our fundamental rights. My proposal is that every Nigerian should have the right to shit with dignity (I am serious).

I have been blessed with the opportunity to visit many airports in the world, Houston, Amsterdam, Frankfurt, NewYork, Baltimore and many others. At no time have I ever encountered a dearth of tissue paper, often what I tend to find is an abundance of tissue paper…rolls so big you could make a bed out of it. But this is not to say that all Nigerian airport lack adequate tissue paper supply, the thing is that I just have not seen it a lot. Even on the rare occasions when I see it they are being held for ransom by Tissue Paper kidnappers. Case in point my experience at the MMA (old domestic wing) in Lagos…were a lady was found hoarding rolls of tissue paper with a “something for the boys girls look.” Basically for you to use the tissue paper which had been provided by the government I had to pay up. This is for something as little and trivial as tissue paper at an international airport.

So I say if the government cannot provide tissue paper for its citizens at its international airport then how can we expect that same government to provide electricity for all its citizens? It is impossible! We have to start with the little things and call our government attention to it. Now I know an occupy the toilet movement is quite unsexy and would possibly die before it starts. But we should start demanding for the little things to be fixed so that we can create a path to fixing the bigger things.

What we call little things are merely the causes of great things; they are the beginning, the embryo, and it is the point of departure which, generally speaking, decides the whole future of an existence. One single black speck may be the beginning of a gangrene, of a storm, of a revolution.

Ofili is an award winning motivational speaker, author, success coach and entrepreneur who blogs about life, success and entrepreneurial excellence. Follow him on BB pin: 32A137F8, twitter , facebook or subscribe to his blog for more success TIPS!” His latest book is titled HOW STUPIDITY SAVED MY LIFE, to find out how it saved his life click ofilispeaks.com/read-book
Related Topics:Ofili Speaks
Up Next