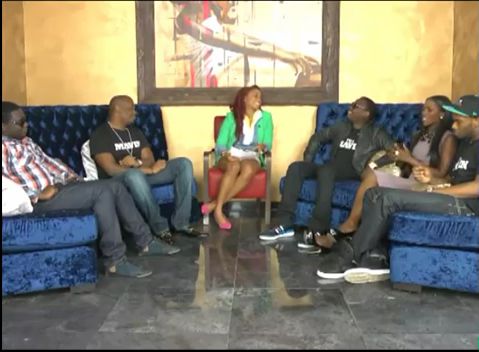 Here is what BN got from the interview!
Don Jazzy is charismatic! – We think this is the most we have ever seen Don Jazzy speak. The formerly reclusive music maestro has come out of his shell and we like what we see. Don Jazzy talked about how the Mavin name was born (it was a collective effort) plus how they chose the name of their free-for-download Mavin Records album “Solar Plexus” (his dad who is renowned for “blowing grammar” included the term during a regular conversation and it just clicked!)
Seems like Don Jazzy is in a very good place and the Mavin team all get along.

Wande Coal is shy! – The super-talented vocalist is clearly laid back but we had no idea he was shy. Wande represented himself well during the interview. He talked about working on his forthcoming album and taking his time to get things right. According to the Mavin team, Wande’s last hit “Been Long You Saw Me” was basically a press release – sample lyrics – “Been long you saw me, Them say everybody looking for me, Been on tour, I’ve been making my money“

D’Prince is his own man! – We found out D’Prince is an independent spirit with a zeal for music. Though we haven’t received a full length album from the Mavin star, he regularly goes into the music and does his thing – even without his famous brother. He is the experimental star within the group and chooses the beats that are different from the norm.
Meanwhile…D’Prince, hmm we don’t believe you banana story o! Watch Part 2 of the interview to see what we are talking about.

Dr SID is sexy! – Yes he is! Watch the interview and see for yourself, the Dr is articulate and all that. Dr SID talked about the #sexyrizationofdrsid, he’s working on himself by going to the gym etc… Plus we found out he is also the “geek” within the team as well.

Tiwa Savage is a diplomat! – We know Miss Savage pretty well on BN as we have published various interviews she has given. However, from this interview, we got to gauge her chemistry with the rest of the Mavin crew. Tiwa gelled well with the guys and so we see this as a partnership that’s built to last.

What We Didn’t See
There was no talk of D’banj and the drama with Mo’Hits. It was obvious this was more of a forward-looking interview