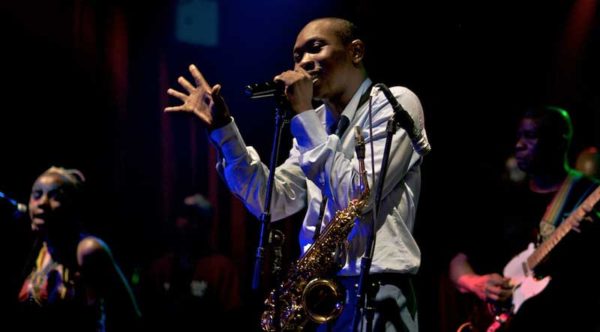 Seun Kuti, the youngest son of Afrobeat legend, the late Fela Kuti, was scheduled to perform as the headline act on 25th July, 2012, the last night of the music showcase during the New world Nigeria event holding in Stratford, London.

Due to organizational discrepancies, not his fault, the renowned saxophonist begun his hour long set almost an hour later than scheduled. Even though, from the minute his performances started, his adoring fans got up to dance but were quickly asked to sit down by the security.

Noticing the situation, Seun Kuti spoke out, saying that if his fans couldn’t dance, then he would no longer perform. As such, his already delayed performance was further cut short, getting his fans riled up and ending the night in shambles.

Factory78 brings us the exclusive footage of the situation, reactions from the fans and what Seun Kuti himself had to say about the situation.

Also, here are performances from the Choc Boiz – Ice Prince, Brymo and Jesse Jagz, alongside DJ Edu and DJ Neptizzle, at Africa Utopia 2012 in  Southbank Centre.