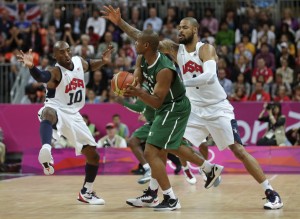 Yes, the Nigerian Men’s Olympic Basketball team, D’Tigers lost their game last night at the 2012 London Olympics to the United States of America, they made history as the highest scoring African basketball team at the Olympics so far.

This is a laudable achievement coming from a country that is making its first appearance in the Basketball game at the Olympics.

Also, the United States set an Olympic record with 156 points, the highest ever in Olympics history.

At the end of the first half, the Americans had scored 78 points while Nigeria was at 42 points. They went on to score 156 against Nigeria’s 73 points by the end of the game.

The final score of 156 points is the U.S highest winning scoring while 83 point differential is a U.S Olympic record.

Despite Team Nigeria’s loss, we are proud of D’Tigers for making their first Olympics appearance and setting a new record for Africa.