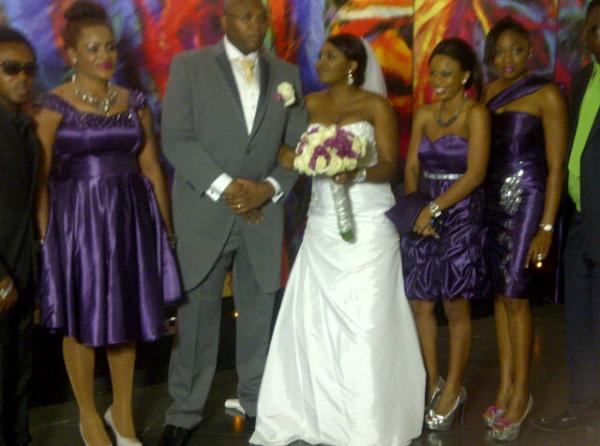 Technology Media entrepreneur Jason Njoku of Iroko Partners wed “BlackBerry Babes” Star Nollywood Actress Mary Remmy in Lagos today. The couple chose an intimate ceremony with family, friends and colleagues on the guestlist. Though the groom, Jason is based primarily in the United Kingdom, the couple chose to get married in the bride’s base, Lagos.

Jason and Mary’s wedding took place at the Golden Tulip Hotel in Festac and purple was the colour of the day as their reception venue was decorated with props in various purple hues while bridesmaids also wore purple dresses. The bride wore a strapless dress with ruched detailing and clutched a bouquet of ivory and purple roses while the groom wore a grey suit paired with an ivory tie.

Nollywood stars including Mercy Johnson, Halima Abubakar, Eniola Badmus, Moyo Lawal, Uche Jombo, Oge Okoye and many more were there to support their colleague on this monumental day while Jason’s colleagues including his business partners and staff from Iroko Partners also flew in to Lagos for the special occasion.

BN wishes the couple all the best in love and life.

BN Bytes: Rick Ross Tearing It Up on Stage Live in Lagos During the Summer Jam Fest 2012