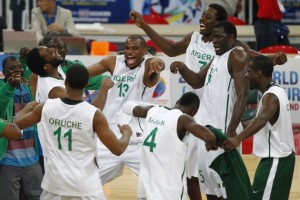 The Nigerian Basketball team was going to be at the Olympics for the first time ever. I was super excited, but when I saw the way the groups were arranged I became a bit pensive. Nigeria would be in the same group as the USA (the team had NBA players!) As with many Nigerians, I turned over our fate to a higher deity. After the initial win against Tunisia, it appeared they were headed on a downward spiral. D’Tigers lost their match against the USA team. D’Tigers were nevertheless not deterred; they pulled themselves up and gave their best on the court in the subsequent games. Some people joked about how we didn’t have any medals to show for the effort. However, one thing we didn’t stop to consider was the fact that this Nigerian team is very special. They’re Olympic champions in their own rights because they’re the first Nigerian team to actually qualify for the game of basketball at the Olympics. They had an impressive run in the qualifying games leading up to the Olympics.

It was even more impressive to see that the New York Times gave a very positive spin on the performance of D’Tigers at the London 2012 Olympics. As reported by the New York Times, the sportsmen were bruised and broken but it didn’t reduce their enthusiasm and their zeal to play for the country. By the end of the group stage, the team had only eight healthy players. Tony Skinn, the point guard of the team had surgery for torn quadriceps and one of  the leading scorers of the game against the USA team was reported to have broken a toe.

Reading that article, the one thing that struck a nerve with me was the fact that the Coach, Ayodele Bakare, did an impressive job of recruiting this team – one that was put together at the last minute. With less than a month to practice together, they were off to Venezuela for the Olympics qualifiers. They won all three games against already established international teams and that set them ahead of the pack, earning them the spot as the first Nigerian team to play basketball at the Olympics. Coach Bakare went over and beyond the call of his role as a coach. He was a friend and motivator. He “dared his players to dream”, according to the New York Times, and that in itself is as much of a victory as they come.

“Bakare, their coach, general manager, insurance agent and travel secretary, embodied what D’Tigers became over the past six weeks. Not simply a basketball team. A historic one.“

Some of the players acknowledged their lack of experience especially in the face of what loomed, but they were optimistic and they trained hard and worked hard for the games. With little or no help, the team arranged for gym practices,and even insurance for those who didn’t have it.

For D’Tigers, this was a historic outing and one that can never be understated especially with the ever prevalent “Naija Factor.“

We, as a people, need to have a more positive approach towards appreciating ourselves in order to help promote optimism and growth, home and abroad.

At BellaNaija, we say a BIG thank you to all members of Team Nigeria at the London 2012 Olympics. We know it’s not a … in fact, no be small tin. We wish them only the best in the rest of the games and in their future endeavors.

7 Cameroonian Athletes Disappear in Britain at the London 2012 Olympics