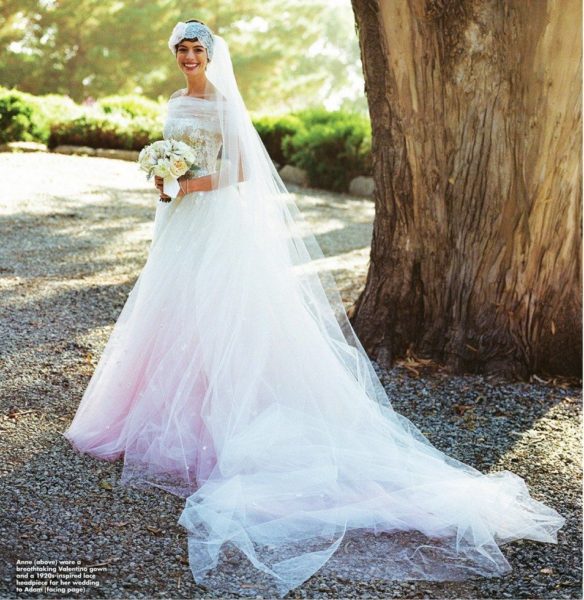 Ever since Hollywood star, Anne Hathaway‘s intimate wedding Big Sur, California, the BN Weddings team has been obsessed with her dress!

After Anne and Adam Shulman’s 29th of September 2012 wedding, blurry photos emerged of the actress in her stunning Valentino Couture wedding dress with its blush pink train and now we get to see the official photos!

According to People Magazine, More than 150 guests were invited for the wedding weekend, which started Friday with a rehearsal dinner at the Ventana Inn and Spa. A nearby private estate was secured for the ceremony. The wedding décor was inspired by nature, with many branches used to create a ceremony and reception to blend in with the majestic Big Sur surroundings. The Dark Knight Rises star kept her cropped pixie cut from Les Misérables for the big day, forgoing any hair extensions. She wore no jewelry, to accessorize, she donned a 1920s-inspired headband attached to a simple veil.

The bride tells Vogue Magazine about her experience collaborating with Valentino, “The memory of creating it with him is something that I will treasure forever. He somehow read my mind and designed the dress that I’d always wanted” 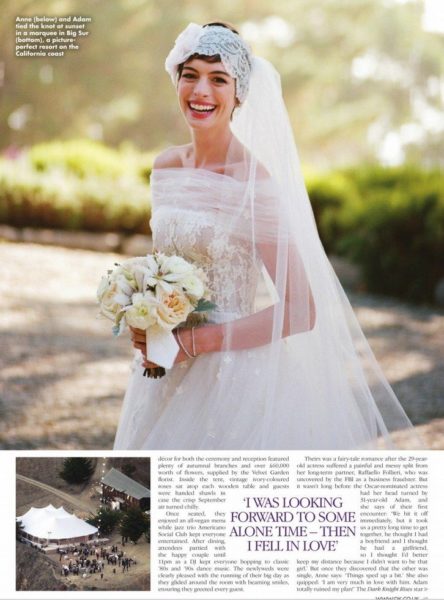 Fly Away With Me: Ehi & Ade’s Marvelous Wedding in Canada