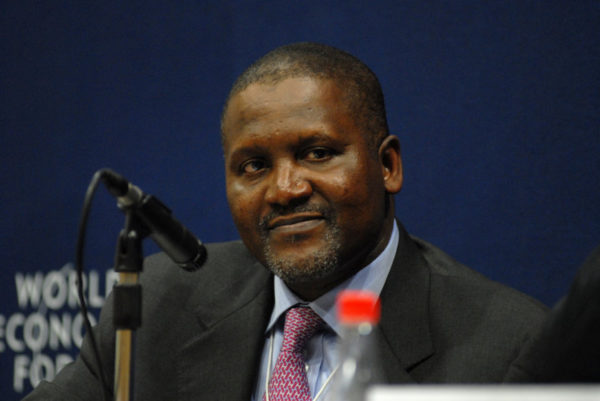 Nigerian billionaire and business mogul, Aliko Dangote has been named as one of the World’s 200 Richest People by Bloomberg.

Bill Gates and Warren Buffett, both in the top five, are household names. At the number 3 position is Amancio Ortega of Spain. The 76-year-old founded Inditex SA, the world’s largest clothing retailer, which is known for its more than 1,600 trendy Zara stores. He made more than $18 billion from the start of the year through Oct. 5 or about $66 million a day.

Aliko Dangote was listed on the 62nd position with a total net worth of $13.5 billion. The 55 year-old CEO of Dangote Cement has made another $3.5 billion so far this year, increasing his wealth by 34.5%

He is however not the only African on the list. Egypt’s Nassef Sawiris was listed on the 141th position having a net worth of $7.8 billion. South Africa’s Nicky Oppenheimer and Johann Rupert made the 147th and 187th positions respectively. Their net worths are $7.6 billion and $6.2 billion.

Dangote’s achievements with his businesses have continued to put Nigeria on the world map. He has been a major contributor to the increase of foreign investments in Nigeria and is one of the largest employers of labour in the country. He recently made the final shortlist of the Forbes Africa Person of the Year Award. We celebrate his success and say we are indeed proud of him.