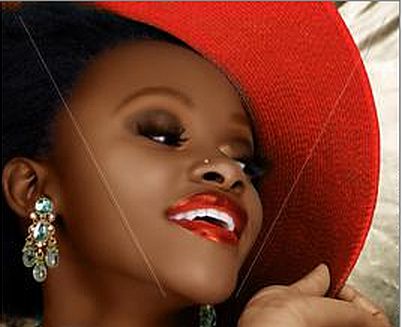 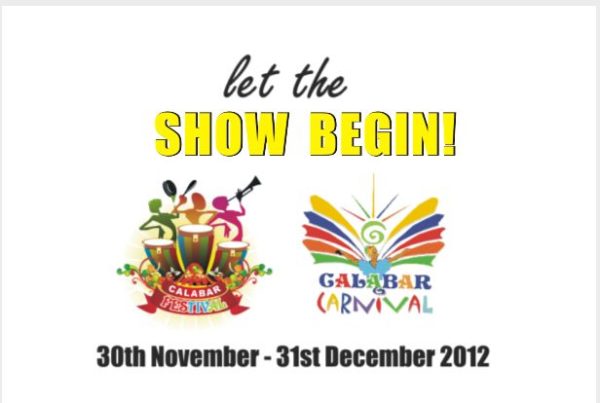 Calabar Carnival
Carnival Calabar is a unique display of African heritage showcased through music,dance,drama and visual creativity which is reflected in the design of floats, costumes and make-up. Despite the fun and relaxed interpretation of the carnival theme under a strict adjudication process. The result is pure magic – an outpouring of colour, sound and spectacular, umatched by anything else on the continent. 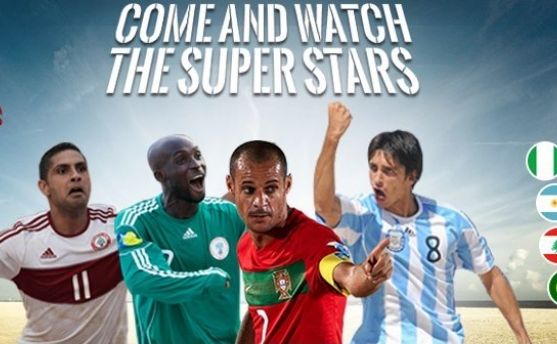 COPA Lagos 2012
The Beach Soccer tournament, COPA Lagos is set to hold from the 14th to 16th December this year. Nigeria, the defending Champion and will take on, Lebanon, Argentina and six times European Champions Portugal at Eko Atlantic. Artistes billed to perform at the opening day include Wizkid, Eva, Ajebutter 22, Solidstar, Tillaman, Shaydee and others. 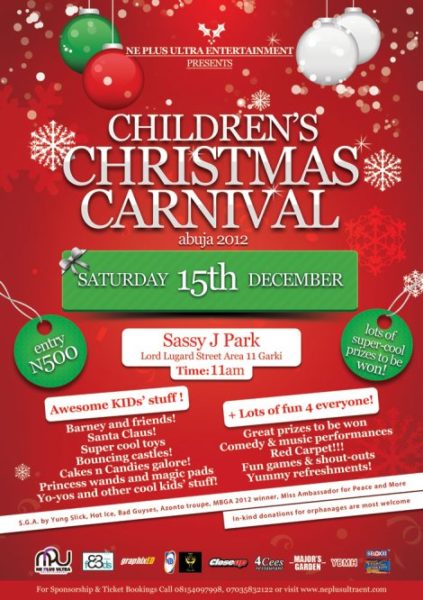 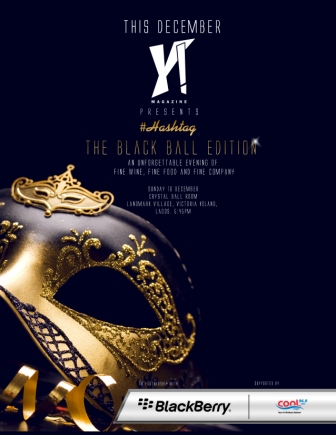 Y! Magazine’s Inaugural “Cinderella Fairytale” Annual Black Ball
Urban-Nigerian Youth publication, Y! Magazine will hold the inaugural edition of its annual black ball. The event will be hosted by MI Abaga and the 3LiveChicks co-presenters, Oreka Godis, Tosyn Bucknor as well as on-air presenter, Anita Isedeh. Dress code for the event is black with masks – the organizers will present guests with masks at the venue. The black carpet will be covered by the Nigerian fashion police crew, GlamSquad, led by style editor, Latasha Ngwube. 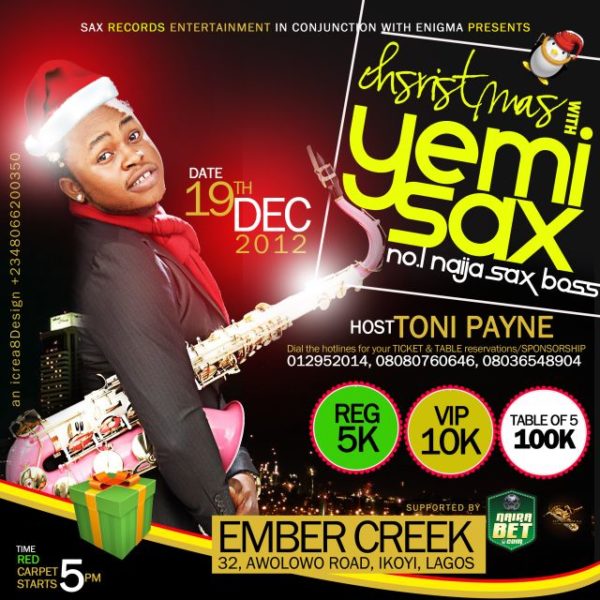 Christmas with Yemi Sax
Nigeria’s leading Saxophonist “Yemi Sax” also known as No.1 Naija SaxBoss and Sax Oracle will be celebrating the Christmas this year with his beloved fans and music lovers in an emphatic style. The event tagged “Christmas with Yemi Sax” will be hosted by the multi-functional entertainment diva “Toni Payne” and will feature your top Nigeria celebrities as guest artistes. 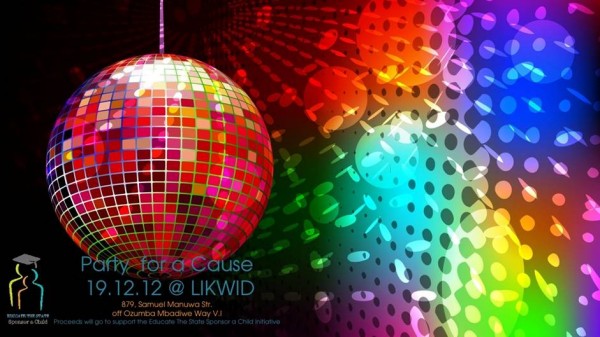 Party for a Cause
You are cordially invited to Party for a Cause, an event that encourages people to give back to their communities by partying. The cause is the Educate the State – Sponsor a Child initiative. This initiative is currently providing 10 educational scholarships and 19 vocational scholarships to disadvantaged children who are wards of Lagos State Homes. It is aimed at ensuring that less privileged have access to education in private schools within the State or are assisted in setting up their businesses after successful completion of their vocational training and the Lagos State Trade Test or other equivalent certifications have been attained. A percentage of the proceeds made at the event will be donated to the organization. 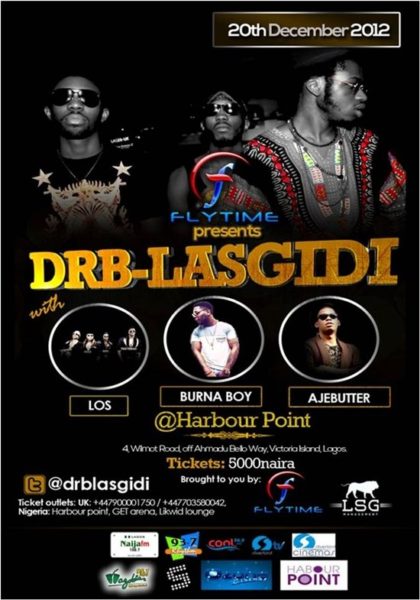 DRB Lasgidi Concert
DRB Lasgidi would be having a Christmas Concert this year. The single SELECTA amongst others, shall be performed for the first time at the concert staged by Flytime Promotions. Also performing will be LOS, Burna Boy and Ajebutter22.

EME “The Baddest” Concert
Empire Mates Entertainment will be rounding up activities for the year with a live-in concert tagged “The Baddest”. The concert which will hold on Friday, December 21, 2012 at The Grounds, Ocean View restaurant in Victoria Island, Lagos will have the EME superstars led by R&B powerhouse, Banky W and internationally renowned pop star Wizkid thrilling music lovers with some of the greatest hits of 2012. Skales, Shaydee, Niyola & DJ Xclusive will also thrill guests at the concert.

Ajumogobia Science Foundation 7th Memorial Concert 2012
Swing into Christmas with an unforgettable evening of sublime carols and seasonal favourites at the Ajumogobia Science Foundation 7th Memorial Concert 2012. Two performances will hold; a matinee at 2.00pm and an evening performance at 6.00pm. As in all previous years, members of the Ajumogobia extended family will feature prominently as artistes during both programmes. These include Feni Ajumogobia, Otokini Ajumogobia, Awune Ajumogobia, Awuneba Ajumogobia, Odein Ajumogobia SAN, Ibiai Ani, Nimi Akinkugbe, Kaline Akinkugbe, and Dolapo Akinkugbe. They will be joined by special guest artistes, Gloria Rhodes, Tayo Aluko and Julius Nglass. 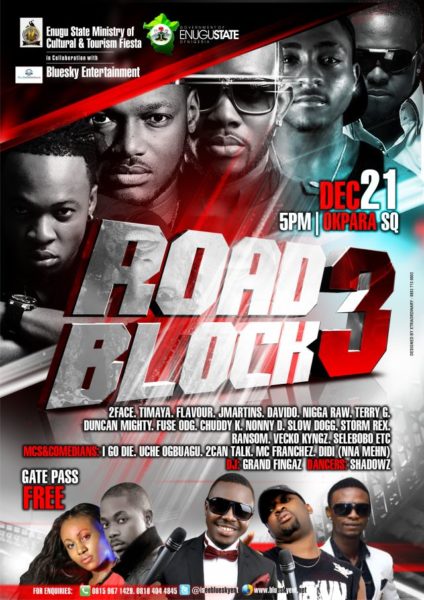 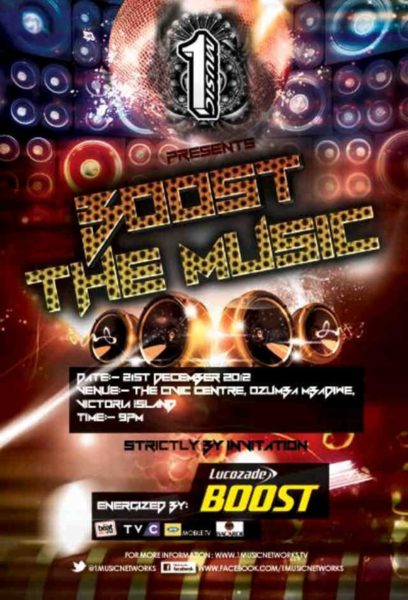 One Music Network presents Boost The Music
One Music Networks presents ‘Boost the Music’, an exclusive entertainment wrap-up party of the year! ‘Boost the Music’ brings together a selected audience to party with their favorite A-list artistes, top DJs, Vee-jays and OAPs. It also includes surprise performances from some of the hottest artistes of the moment who will perform to an intimate crowd in a very interactive energetic atmosphere. 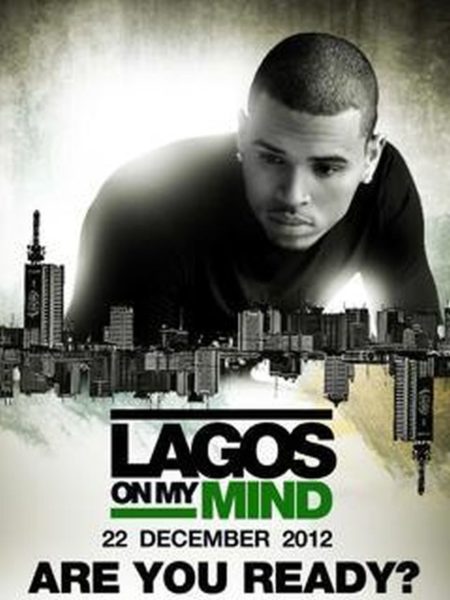 Chris Brown Concert
American pop star, Chris Brown is set to storm Lagos on the 22nd of December 2012 for a pre-christmas show. 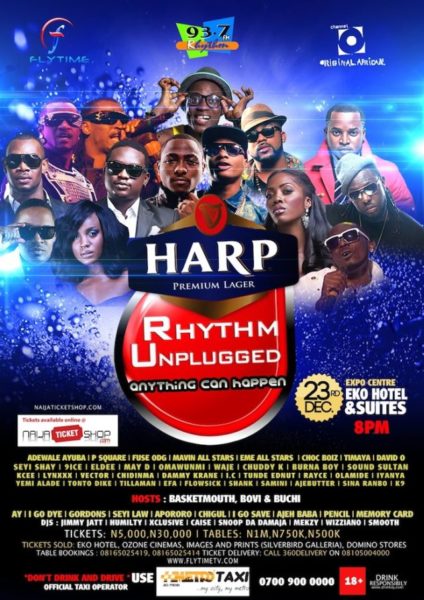 Project Help: A Dance for Life
Nollywood actress, Monalisa Chinda is set to stun Nigeria’s theatre and performance world with the maiden edition of her world class production titled Project Help: A Dance for Life. This is an enactment of a thrilling contemporary dance powered by Bailamos Dance Company, an ensemble that has treated Nigerian aristocrats, elites and technocrats to the best ecstatic performances as directed by choreography wizard Bunmi Olunloyo. The event would feature an array of Nigeria’s biggest superstars including Desmond Elliot, Kate Henshaw, Segun Arinze, Bimbo Akintola, Bovi, Monalisa Chinda and many more. 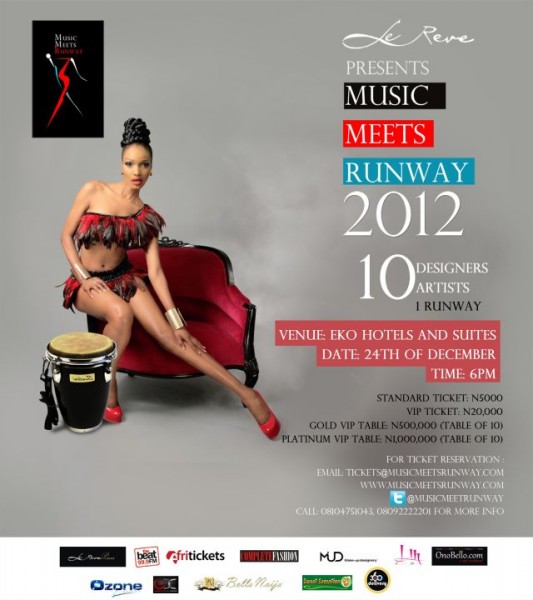 Music Meets Runway 2012
Music Meets Runway (MMR), the show that brings you 10 Designers, 10 Artistes all on 1 Runway is back and it is going to be bigger, better and even more explosive. MMR aims to promote talents in the Music and Fashion industries by fusing performances by some of the most outstanding artists in the Nigerian Music industry and with a runway showcase featuring some of the most creative designs by up-and-coming designers Nigeria has to offer, from Pret-a-Porter to Couture Fashion. 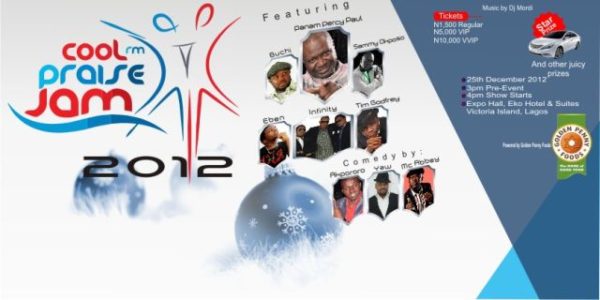 Cool FM Praise Jam 2012
The Cool FM Praise Jam 2012 is set to hold on Christmas Day. It would be a fun filled family event with lots of music, comedy and dance. To perform at the event include Panam Percy Paul, Buchi, Sammy Okposo, Eben, Infinity and Tim Godfrey. Comedy would be provided by Akpororo, Yaw and Mc Abbey. 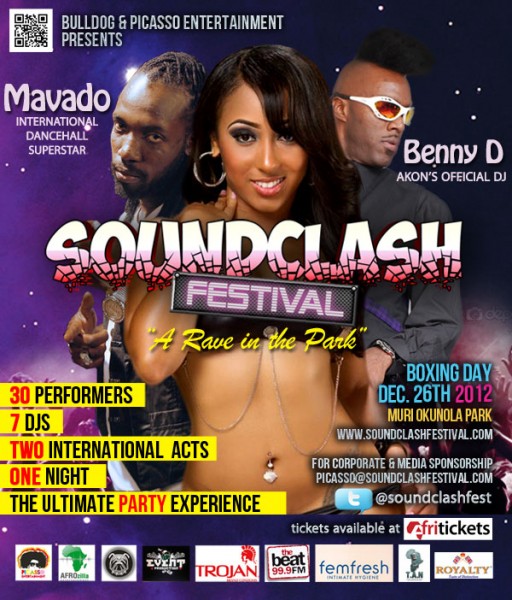 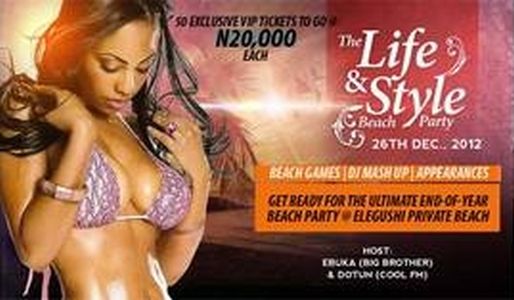 Koko Concert 2012
The Koko Master, D’Banj will be headlining the 2012 Koko Concert set to hold on  December 27th 2012 in Lagos. This year’s edition promises to be a big one with Idris Elba billed to be the host of the show and GOOD artistes Big Sean and Pusha T also scheduled to perform. DB Records artiste Kay Switch is also billed to perform.

Super Sun Concert
The ‘Stupid Song” Crooner Bez, is set to hold the Super Sun Concert this December. Artistes like Omawunmi, Tiwa Savage, Waje, Timi Dakolo, and Praiz are set to perform at the concert. The event is being put together by Cobhams Asuquo Music Productions and Flytime Promotions.

Be Thankful & Pop Party – A Boat Cruise and Champagne party
LYOCOM presents the all exclusive BE THANKFUL AND POP PARTY; a Boat Cruise and Champagne party. The idea behind this concept is to bring people together to celebrate the end of the year 2012 in a very unique environment while providing everyone with a party experience like none other. It is designed to be a very classy affair targeted at mostly individuals from the corporate world. The all exclusive boat party would have some star guests on board to socialize and have a good time with their fans and lovers, while talented singers would serenade guests with great music. Another star attraction would be in the person of the host; popular radio and television personality IK Osakioduwa. Expect to have a great time with talented and beautiful singer Waje as well as one of the most outstanding urban contemporary singers today; Praiz. On the wheels of steel, DJ Sose would be providing quality music.

Related Topics:Christmas 2012Events
Up Next