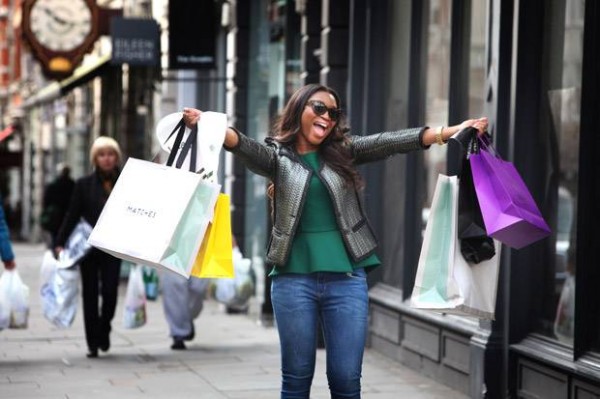 It’s the month of January, one of the peaks of the retail sales season  in London and Nigerians are amongst the leading pack of top spenders.

Below is the article from CNN

Shopping is a serious business in London whatever the season — but it doesn’t get much more serious than this time of year.

The UK capital’s January sales sees throngs of dedicated shopaholics cram its countless department stores, quirky boutiques and market stalls, keen to get their hands on the latest fashion trends and product offers.
But it’s not just domestic spend that’s keeping the tills ringing in London. While the vibrant city’s high-end stores are no strangers to overseas visitors, with those from the Middle East typically spending the most, a surprising new contender has emerged in recent times as a big spender in the international market — Nigeria.

“Africa is growing from strength to strength and particularly in the last 12 to 18 months we’ve seen Nigeria come through incredibly strongly,” explains Sue West, director of operations at up-market London department store Selfridges.

“It is a very broad base so we still very much have a strong Chinese base, a strong Middle East base, Russia is there, the BRICs nations as you imagine, but Nigeria seems to be coming through very strongly at the moment as well,” she adds.

The former British colony is Africa’s most populous nation as well as the continent’s top oil producer. According to African Economic Outlook (AEO), Nigeria’s economic growth has averaged about 7.4% annually over the past decade, creating a wealthier Nigerian elite with a large spending power. At the same time, however, AEO says that robust economic growth has not reduced poverty in the country, with about two thirds of its population living on less than $1 per day.

Home to a large African diaspora, the UK is a popular travel destination for Nigerians visiting friends and relatives, going on holidays or conducting business.
Daily flights between Nigeria and the UK have increased in recent years, with airlines such as British Airways allowing Nigerian customers an additional 23kg of baggage free of charge.

They’re getting on a plane and coming to London to buy things they cannot immediately find in Nigeria.

According to the UK’s Office for National Statistics, some 142,000 Nigerians visited the UK in 2011, spending an average £107 ($172) per day. From January to September last year, Nigeria’s tax-free spend in the UK grew by 11% year on year, according to tourism services provider Global Blue.

The trend has not gone unnoticed by UK retailers, some of which have responded by tailoring their offerings to their growing Nigerian customer base.
“More recently we’re starting to introduce a lot more niche brands,” says West. “We’ve worked in collaboration with some very popular Nigerian brands,” she adds. “I think it’s not only important to demonstrate we can bring the big brands such as Louis Vuitton and Chanel, but we can also really appeal to more of a niche market too.“

One such collaboration helping Selfridges further engage with its growing number of Nigerian customers is its recent team-up with Style House Files.
The Lagos-based fashion company has just opened an installation inside Selfridges, giving Nigerian designers a chance to widen their market and showcase their creations outside the West African country.

Omoyemi Akerele, director of Style House Files, says that Nigeria is an emerging market, with Nigerians are among the five biggest spenders at the department store.
Akerele argues the collaboration is a win-win situation for both parties.
“This will give our designers a platform, an opportunity for their pieces to be in Selfridges, that’s a dream come true,” says Akerele. “For Selfridges, on the other hand, it would endear their Nigerian customers — and not just Nigerian customers, African in general — more to the brand.“

Akerele says that although the reality in Nigeria is that most people live in poverty, the rise of sectors such as telecommunications and the diversification of the Nigerian economy beyond oil and gas has created an emerging middle class with bigger spending power.
“Their earning capacity is increasing and they’re spending on more things and not just the basic food and clothing,” she explains. “They’re getting on a plane and coming to London to buy things they cannot immediately find in Nigeria.”
From CNN

More in the video below: