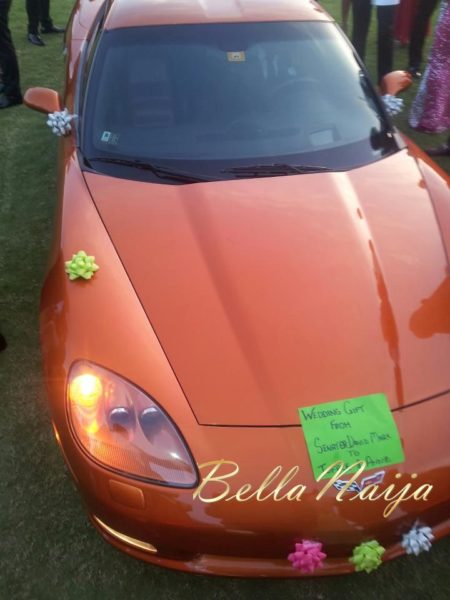 Guests spotted this brand new Chevy Corvette with the message “Wedding Gift from Senator David Mark to Tuface & Annie” at the couple’s wedding in Dubai yesterday.

2Face is from Benue State, the same state as Senate President David Mark who is the Senator for the Benue South constituency.

Here is how the official website describes the car;

Corvette has carved a permanent place as an innovator in the global automotive landscape and is the top-selling high-performance sports car in its segment. From its standard 430-horsepower LS3 all-aluminum V8 engine, 190-mph performance and its 26-MPG-highway† fuel efficiency, Corvette defines state-of-the-art technology, engineering and design among luxury sports cars year after year. And with options for personalization, the 2013 Corvette stands to reflect unparalleled distinction.

According to CKN Nigeria, Special Adviser – Media & Publicity to the President of the Senate David Mark, Kola Ologbondiyan allegedly claims the gift is not from Senator Mark {Click HERE to see the full report}

Senator Mark did not visit Dubai for Tuface wedding rather he attended the 128th Inter parliamentary Union (IPU) conference currently holding in Quito, Ecuador. He was also not represented at Mr. Idibia’s wedding. It is also instructive to state that the President of the Senate, Senator Mark, did not make a car donation of any kind to Tuface before departing Nigeria for Ecuador neither did he purchase nor send any car to Dubai as a wedding gift for the musician or his wife. Who made the donation on behalf of the President of the Senate?
It is therefore a puerile lie for anybody to state that Senator Mark bought a Ferrari car worth N47m for Tuface. The allegation is wicked, ridiculous and irresponsible.

What should we believe, the photos or the politician’s PR? No word on how the car will make it back to Lagos where the couple is based. 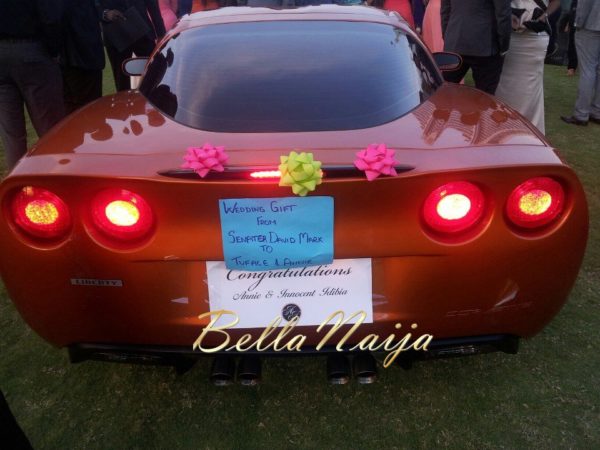 BN Exclusive: All You Need to Know about Annie Idibia’s Wedding Dress! It’s by “Love, Tims” Bridal Line of “I Do Weddings”