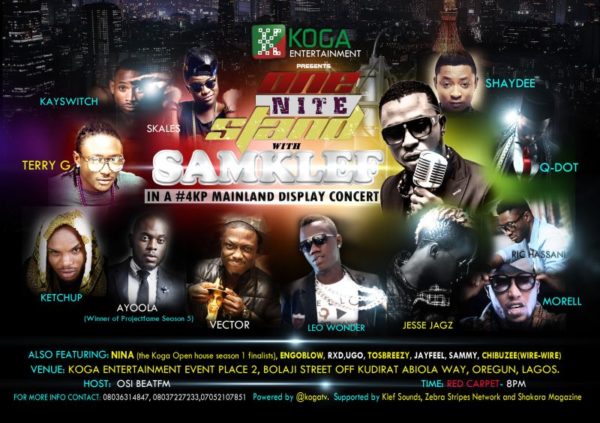 The second edition of the One Night Stand event proudly brought to you by Koga Entertainment is here. Tagged “One Night Stand with Samklef” the show will treat fans to performances by Terry G, Samklef, Vector, Kay Switch, Skales & Ketchup.

According to the Project Manager, Amaka Eromole “It promises to be a night of fun, all we have thrived to do is to ensure that every edition surpasses the previous one, and this month, we are glad to have come up with this line up for fans of live music”.

One night Stand is a Koga Entertainment initiative, which was created to fill the vacuum for fans of live music. Past editions have seen likes of Sir Shina Peters, Obesere, Dede Mabiaku, Sound Sultan, Normoreloss, Rugged Man and a host of others perform. Don’t miss out.