"I Had an Idea, I Didn't Have a Laptop" Young Nigerian Billionaire Ladi Delano Speaks to Forbes Africa in its September 2013 Edition

The last time we ran a story on Nigerian entrepreneur Ladi Delano on BellaNaija a lot of our female readers were quite curious about his eligibility for marriage. {See link here}. Fortunately, there’s so much more about Ladi that is beyond they mystique of his marital status. He is a go-getter and a business man who sees opportunities and goes for the jugular.

In the September 2013 edition of Forbes Africa, business and financial journalist, Abi Owolawi runs an extensive feature on Ladi Delano’s business acumen. The piece gives insight into Ladi’s background and how he worked his way to the top.

Here’s an excerpt from the report:

“The path may have been well lit, but hardship lurked around the corner. In his student days, Delano found he suffered from mild dyslexia and deafness in one ear. Learning became more and more difficult and the idea of school waned. Despite this, with the help of extra lessons, Delano made it to a top university on a day he describes as glorious. The novelty soon wore off and academia became Delano’s nemesis. In his second year of a political science degree, he made up his mind. “It became quite clear that I didn’t have a passion for my course. I think that lead to me being easily distracted and that, ultimately, culminated in me thinking that rather than flogging a dead horse, it would make more sense to do something I was more comfortable with. There are two types of education and each form of education is equally as valuable. The academic approach to education is vital, no business can operate and be successful without those who have spent the time to understand the academic side of anything. However, that approach to education is not necessarily for everybody. And in my case it wasn’t. So, I decided to withdraw from university,” he says. Delano’s decision didn’t go down well at home, but there was no stopping him. At least university had planted the idea of becoming an entrepreneur.“

“In April 2012, Delano moved back to Nigeria—a country with 60% of the population under the age of 35 and a youth unemployment rate sitting at 43%. “I just love Nigeria… I want to provide jobs and help the youth develop themselves. It’s an honor to be able to contribute to the economy in this way,” he says. The first contribution will be made through a mining asset acquired in May. “We now have $100 million to spend on the asset in order to get it to production. We anticipate that the asset will be in production within the next year or so and we’re hoping that this will kickstart the mining revolution in Nigeria,” he says. “We recently advised Ladi on completing his first mining deal where he energetically drove the process and discussions with multiple stakeholders through to a successful outcome. Ladi is already focused on several opportunities and we see him doing very exciting things going forward,” says Raj Khatri, head of metals and mining for Macquarie Capital, Europe. From London, to Chicago, to China and West Africa; through vodka, mining and hotels; it has been a roller coaster ride for Ladi Delano in his first 31 years and you get the feeling he has only just got started.“ 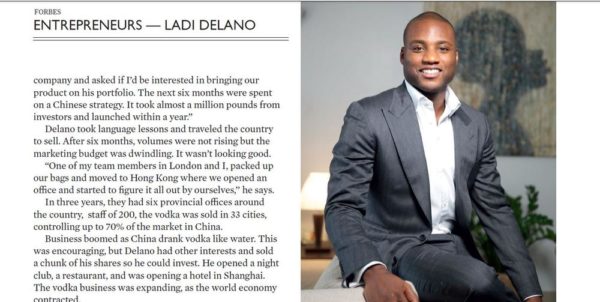 To find out more about this super inspiring young man, you have to pick up a copy of the September edition of Forbes Africa.