Cobhmas Asuquo on his Wife: "She's My Pillar & Strength" 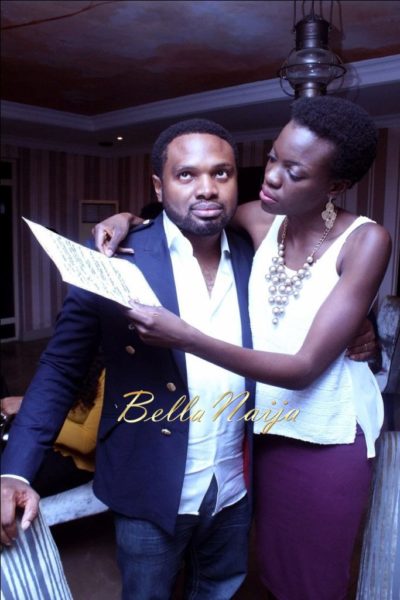 You probably teared up when Cobhmas Asuquo and his sweetheart Ojuola Olukanni tied the knot in December 2010…well at least we know a couple of people who did.

The Nigerian singer and producer recently had an interview with Encomium Magazine. It was all about family, success and music for the visually impaired prolific entertainer who just had an intimate celebration for his 33rd. (click here to see)

After reading the full interview, we couldn’t help but get a bit emotional when he talked about his wife. The couple have a son.
Read Excerpts below;
On Ojuola: “My wife is a pillar. In a lot of ways, she is my strength. She is a very strong and wise woman. She is from an amazing family; she is an absolutely supportive person. She and I have been friends for many years, without knowing that that friendship would lead to marriage. Apart from taking care of the home front, she has contributed to the success of my career. She is a passionate person who knows how to drive me to success. I feel so fortunate, so lucky to have someone like her as my companion.”

On when he’ll have a second child: “When you talk about children, nobody goes around to announce when he is going to have his next child. You don’t live life under that kind of pressure. I think, for me, the most important thing is that I am living a good life, and at least, as a starter, I even have a child. You know what that means. There are many people looking for children, and God gives to them at His appointed time. I believe there is abundance of children in heaven, but God gives them out at His appointed time. So, whatever anyone sees now, let them just take it. I think God is answering the prayers of our heart, whether we have a second child or not.”

On how he recognizes his son: “Of course, you would know. I don’t think you need to be a scientist before you know. Although, I won’t bring science into it, because I may not have facts to support anything that I say in that direction. You will definitely feel it, whether you see or not. I don’t really know how to explain it, but you would know. I don’t think everything about life could be explained, some things are just what they are. They are mysteries of life. As far as I am concerned, I know when my child comes around, and I don’t think that’s difficult for me.”