Kenya Moore is Dating a Nigerian Business Mogul! All You Need to Know about the Hush-Hush Relationship 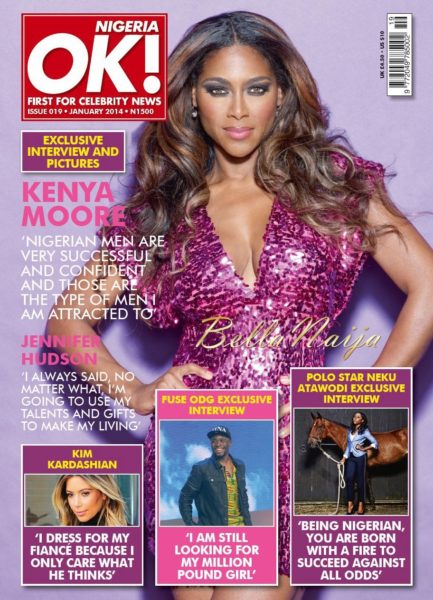 “Nigerian men are very successful, and confident and those are the type of men I am attracted to”

Real Housewives of Atlanta star Kenya Moore has more than a thing or two for our Naija brothers. OK! Nigeria Magazine presents EXCLUSIVELY to BellaNaija.com the cover of its January 2014 issue.

The 42 year old American reality TV star sizzles on the cover in a purple sequined dress with quite a generous decolletage. Inside the magazine, Kenya speaks on why she’s attracted to Nigerian men and if marriage is on the horizon.

Kenya and her boyfriend are extremely private about their relationship, but these we do know.

Facts about the Relationship
Spotted in Nigeria: Apart from hosting D’banj‘s DKM Live in Concert show (click here to see), Kenya has been spotted a few times in Nigeria, presumably to visit her man.

They’re Private: In an episode of Real Housewives of Atlanta, Kenya Moore beams as she speaks to Nene Leakes on her boyfriend. So why haven’t we seen him? Kenya reveals he won’t appear on the reality show and plans to keep the relationship very private.

He is her African Prince: In December 2013, Kenya sat down with Wendy Williams on The Wendy Williams Show to dish about her love life and another season of the show.

When Wendy mistakes her secret beau for one of Folorunsho Alakija‘s sons, she corrected her and said isn’t dating any of the Alakija blood, nor a prince but calls him “My African Prince”

He’s Rich and Young: Kenya further reveals to Wendy that he runs a multi-million dollar company, and he is young because she “needs someone with a strong back”.

He is Single: NOT a married Man

She’s ready for kids: It seems things are really heating up for the pair and they are ready to have mini-mes. Kenya who wants a child soon, recently had a surgery to remove fibroid tumours.

She will reportedly begin In Vitro Fertilization as soon as she is healed from the surgery.

Can you guess who it is?

Pick up the new issue of OK! Nigeria Magazine for more scoop on Kenya and her leading Nigerian man.

The Think Oyo Initiative Awards 30 Young Nation Builders under 30 at its Awards event in Ibadan!