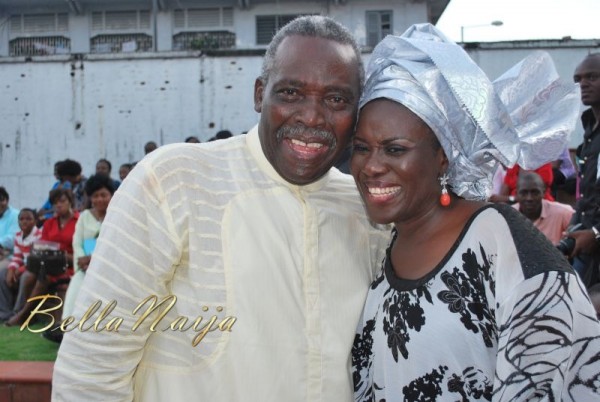 In 2011, when BN brought you the exclusive photos from Joke Silva‘s 50th birthday party and vow renewal to Olu Jacobs, you all were in awe. If you missed it, click here

The couple who met in 1981 at a rehearsal and wed in 1985, have shown that love can truly last a lifetime.

The veteran Nollywood superstars had a sweet and quite emotional interview with Vanguard on their marriage, how they met and still keep the fire burning.

To read the full interview, click here.
Read Excerpts below;
Joke Silva
On meeting Olu: “People had been talking about him before I arrived the country because he was based in the UK at that time. Everybody was talking about him, especially Miss Ene, the then Artistic Director of the National Theatre and Dr. Ashiwaju.

They had met in England and I guess he would have been the Chiwetel Ejiofor of that time. Just as what Chiwetel is to this present generation, so he was then.

He was one of the top African actors in England at that time, whether on stage or on screen. He was the talk of the town. So, I was looking forward to meeting him; when I finally saw him, he was quite a handsome man. Our first meeting, if I could remember vividly, I went to call Miss Ene to come and watch our rehearsal.

They were in a production meeting, and, when I entered the office, the first thing he uttered was, “This is the woman I am going to marry.”

When I left the office, I said to myself, `How can anybody say it just like that?’ He always insisted that I eyed him every now and then. We started out as very good friends. Four years later we got married. We met in 1981 and married in 1985.”

On keeping the marriage going: “Friendship. We are each other’s very close friend. It’s not as if we don’t have close friends outside our marriage, but I think we are both each other’s number one close friend. The other thing is mutual respect, the fact that we both share the same passion about the area of entertainment that we are in.

Of course, the various challenges that we’ve faced over the years , we’ve learnt how to surmount them together. At different times when it is necessary, we have both learnt to forgive each other. I guess the sum total of what I’m saying is that God’s grace has been present in our marriage.”

Joke on what she doesn’t like about Olu: “Of course, we get mad at each other ten times a day.( Laughs). Earlier in our marriage, when we used to snap at each other, it led to sulking on both sides for hours.But now, there is nothing like that any more. We can get mad at each other and the next two minutes we are laughing and talking to each other. If we quarrel and it lasts for a couple of hours, it’s because we want to drive a point home.

There is a beautiful way an actress put it. She said, and I quote, “Within the marriage, there are lots of weddings and divorces, but what is important is that the weddings should be more than the divorces and then you have a successful marriage.”

On marriage break-ups: “I wouldn’t dare say that I can talk about that, I can’t; because I know that what I have is God’s grace. It would be arrogant to say this is what caused the break up of this person’s marriage. I’m not walking in their shoes. All I can say is that there are things that happen that can break up marriages, but if you can pray for strength to weather those storms and usually when these storms are happening, it’s because there is something good, there is a contention. Marriage is an institution created by God.

As a Christian, I look at it from the Christian perspective. It is a symbol of God’s union with his Church. Marriage is always on the attack; if you remember, even in the Garden of Eden when Eve was found on her own, she was attacked and, when she succumbed, it was easy for Adam to fall. If you can ask for the grace to weather the storm, there’s always something beautiful at the end.

If you’re being physically or mentally abused in a marriage, to be honest, for me, I’d go for separation. Then, we go for counselling and see if the union can continue. With a lot of prayers, it usually does come together. But for me to say this is why marriages break up, I can’t.”

On Intimacy: “I don’t think it’s possible for you to have marriage without intimacy, because if there’s no intimacy, why bother with marriage? Most people think intimacy means just sex, there’s more to it than that. There’s a meeting of minds, there’s that bonding. Sometime ago, I used to tell him (my husband) that ‘one of the reasons why I find that I can’t leave you is that the next morning, I’m likely to call to find out how you are’.

There is just this closeness. I really don’t think marriage is possible without intimacy. I think it is very important that there is trust in marriage. Trust can be broken, but it can be healed. Some people believe in polygamy, I don’t. I don’t believe in sharing. It has to do with what works for you as a couple.”

Olu Jacobs
Love at first sight: “Yes, it was the case of love at first sight. Our story runs like a novel. We were doing a production meeting for Jero’s Metamorphosis at National Theatre, Iganmu. I was playing Brother Jero and, at the same time, co-directing the play. Suddenly, the door opened and the lady came in, I looked at her and said, ‘Ladies and Gentlemen, this is the woman I am going to marry’. She just looked at me up and down and left.

Four years later, we got married. That was how sure I was when I saw her and I have never been that kind of sure in my life. I’m not an extrovert when it comes to that. I keep my relationship quiet. But that was how I saw it at the moment when I saw her.”

On what he doesn’t like about Joke: “She used to keep things in mind, I never realised this on time. When you think everything has been forgotten, all of a sudden she reminds you of it. At first, I used to be very upset, and then I realised that I used to be like that. Memory is good, but at the same time, we must make sure that we use it for good. Instead of looking for something bad that she has done, use that same time to look for something good that she has done, then you’ll find that she has not done anything bad, when you compare both. But we exaggerate what we consider bad.

The challenges are challenges and they must come in life. It is very easy to talk about the bad things but the good things are the ones that inspire. The bad things should be remembered in order to warn you to change for the better. Use them for change. My wife is very generous, very kind and caring. If you’re having a problem, she’ll listen and take it up as her own. If you need something and she has it, she’ll give it to you.

I’m very happy with her and she’s my best friend. When you have a friend at home, you want to go home. Wherever you are, you want to finish whatever you are doing and go home. The home is attractive to you and that’s the kind of person she is. Sometimes, when we are working separately, we try to always be on phone with each other two to three times a day. If it is possible on our way to branch and say ‘hi’, have a cup of tea together which we do sometimes and spend the night. Then the next day, she’s off to her station and I’m off to mine. We keep in touch.”

Quite a lot of them want to take over your position. Pray for contentment.

Pray to meet, have and keep your friend. You need the wisdom to see and recognise a friend. Always think for two ( you and your wife). You and your wife first, others can come in later. Even your parents will tell you, This is your wife, take care of her.”