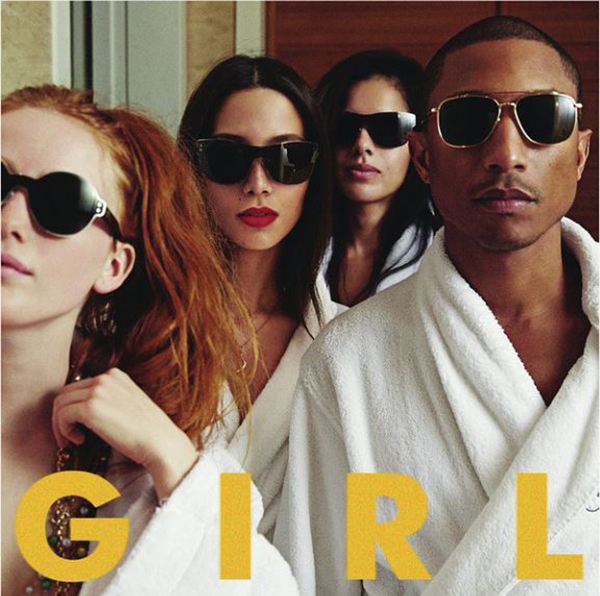 Fans spoke out on Twitter that the musician didn’t feature a black lady on the cover of the album which he says is an “ode to women”. They were very vocal, even speculating that he didn’t think black is beautiful.

Pharrell who will be at the Academy Awards on Sunday, called Power 105.1′s The Breakfast Club to speak on the cover. He said there is a black girl on it and he dated her in the past.

What really disappointed me is they jumped the gun, because the one I’m standing closest to is black.

She’s a black girl from Wisconsin that I used to date over 10 years ago. Maybe 12 years ago. That just must suck man for people to look at something and to assume they know what’s going on. If they just bothered to listen to my album, they would know that my album was an ode to women, period.

And the one thing that’s I’m trying to kill…well I can’t kill anything…but the one thing I was trying to aid in changing the crazy statuesque standard of you gotta be white, waif, and thin for you to be beautiful.

Man, it must suck to be that black woman that’s on my cover right now because she’s black. When they find out that she is black, then what? Then we’re arguing amongst ourselves within color.

Then the argument’s going to be she’s not brown enough. Then my question to you is, are y’all asking me do I have an Indian person on the cover? Why aren’t you asking about a Pakistani person? A Middle Eastern person on the cover. I just…man. What are we talking about? We’re making huge strides here. Let’s unify, dude. ‘Cause honestly, if you know anything about me, if you’ve seen any of my videos, you seen any of the girls I’ve ever dated, you know I like ‘em all.. You would know that.

Related Topics:GIRLPharrellPharrell Williams
Up Next

Everything Toni Payne Podcast: Surviving a Bad Breakup – Things You Should Know